So I just finished the third and latest installment of the weekly series and here are my promised further thoughts - just be forewarned, I'm about to get my rant on, up in here ;)

(As for my reasons for making an exception to my "anti-reality-TV" rule for just this reboot, read that original post, two posts below.)

I can't find a Becky/Kevin clip yet without someone's commentary added, so perhaps I'll post it here when there is. 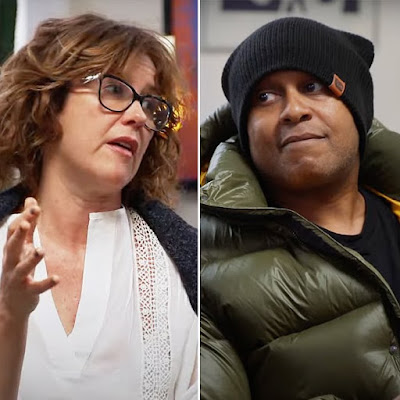 Until then, I've got to say, I agree with Norman, who unstereotypically told Becky ...

First of all, you never stopped talking or let anyone else talk or finish a single sentence during that "discussion."

Secondly, you are the only person in a group of 7 people that took no responsibility at all, for mistakes in your youth, nor gave an apology for the slightest thing.

Thirdly, you signed up to do this show, specifically knowing you were going to discuss racial issues and past mistakes, 30 years ago, promising that you were going to listen more and look for/provide healing - but then walked off like a drama queen, after claiming everyone "attacked" you.

Look - nobody "attacked" you - they gently asked for clarification on some elitist, tone-deaf, stupid things you legitimately said, on camera.

Instead of examining that, you got defensive instead, which only made it worse, to the point where it would've been better to just - stop talking.

Even Kevin was surprisingly chill, this go round - that is, when you'd let him finish, without interrupting lol.

And may I just say that I'm so sick of other white people (particularly white women, but not exclusively, as many white men do, too) using the phrase "attacked" to describe verbal exchanges in which they actively participated in (and may have provoked) themselves, as if they're innocent victims?

(And that includes Sharon Osbourne.  Sorry, I was initially a fan, but the more we go along with this Sharon Osbourne story and her responses, the more frustrated with her I get and she's losing points by the day with me.  In fact, I was reminded of Sharon Osbourne exactly watching Becky and Kevin's interaction.)

I don't think I've ever used the word "attacked" to describe a verbal exchange in my life!

IMO, the word "attacked" is reserved for actual war or physical altercations in which an innocent, unsuspecting person is literally physically attacked - NOT to describe a verbal altercation with at least two people actively participating, in some kind of melodramatic white-person false-victimhood! lol


(But nobody was even "bullying" Becky - they gently asked for clarification on the elitist, tone-deaf, stupid stuff that was coming out of her mouth, giving her a chance to explain herself - which she used to only make it worse.)

Nobody on this show "characterized" you as anything, Barbecue Becky -  you did that to yourself.

Even if they did edit the clips, saying these things at all, under any circumstances, was ... whack lol.

I mean, you literally tried to use "taking African dance classes" and "I'm friends with a Russian theoretical physicist (???)" as proof you're woke and not racist.

Are you serious with that? lol

That's just ridiculous, automatic white-person defensiveness, and it's absurd - and the amount of times you name-dropped and bragged about how much stuff you have, how many homes in various countries you have, what you've done and how many famous intellectuals you know -  you made yourself appear elitist - nobody did that to you but YOU.

Then you packed your bags and tried to leave in the middle of a house meeting, like a drama queen, saying to the producer that you'd "grown past" this show, like you were better than everyone else - refusing to say goodbye or explain, but asking if anyone was going to help you carry your bags.

Are you kidding me with that? lol

Girl, if this was a scapegoating or a group-bullying toxic situation, I'd agree with you - but it wasn't.

You haven't "grown past this" - the problem is everyone else has grown up and grown past you, living in your over-privileged bubble, for the last 30 years,  that no one dare enter and challenge, and you crash if anyone ever challenges it, even with sugar on top, and yet you still imagine that your rich-white-girl problems are bigger and worse than everybody else's anyway!

Ugh, I know so many white women like this, including people that I reconnected with via FB that I went to high school with, even in my own family, both conservative and liberal.

However, I think the fact that they claim to be my fellow liberal/progressives, but have no clue what financial struggle is, and yet their problems are somehow always still worse than everyone else's, actually makes me cringe worse than I do with conservatives lol.

Thus, I'm going to say this not only to Becky, but to 95% of the over-privileged white women I grew up with ...

Girls, I hate to break this to you - but you ARE Karens - you talk the talk, but you don't walk the walk.

Not only are most of you either too blissfully unaware or too afraid to even gently challenge the system, for fear of loss of what perks you DO get from a broken system, but you don't give of yourself and your time to actually do the work of self-examination for implicit racial bias and general self-improvement.

You complain about "me-too," but fail to see how you actually contribute to misogyny yourselves, by helping predatory men (and women) out, through not believing women who claim this, victim-blaming, and smearing other women via vicious, reputation-ruining gossip!

Then you take yoga classes, go to spas, and attend relaxation retreats to "escape" from all the "political stress."

Well, Namaste, ladies! Good for you!

Now, why don't you actually DO SOMETHING to help those less privileged than you instead, who could never afford to do what you do, to "deal with stress," whom you find various reasons to justify not helping (usually victim-blaming).

Despite at least having financial security, all your problems are still somehow always worse than people who don't, and no one ever can do enough to make you feel better (as if that's our job; not to mention, you are doing nothing at all to help THEM feel better), nor does anyone ever "appreciate" you enough.

Everything is always about YOU, starring you as the innocent victim, demanding people "appreciate you" more  - though you're actually the one victimizing other people and not appreciating THEM!

Look at Julie - she took to heart what happened with Kevin in 1992, and shocked the sh*t out of us all, when she revealed that she really self-examined herself, back then, and came to terms with the fact that though she never hated or feared people of color or gay people, she didn't know any people of color or gay people, and she needed to learn - that it wasn't enough to just sit back and not actively say and do racist things, but to become ANTI-racist.

Now, her daughter is an ambassador for the Civil Rights Institute in Birmingham, she's on the board of a community organization to help underprivileged kids get to college, and marched with the Obama family in Selma, and used her voice for change on social media.

What have YOU done, Becky?

Constantly bragged about yourself and your privilege, used social media to try to sell your mediocre music, taken off to France during Trump, taken yoga classes and African dance classes, whined about misogyny and "me too," and imagine you can call yourself "woke?"

I don't think so, Princess lol.

Now - I'm sure there's good in you, too, I've seen it  - but time to get off your pedestal, Princess, grow up, and start giving more than you demand others give to you.

Watch yourself again and try to do so without squinting and getting defensive, Love -  because it's not so pretty.

You want to grow and heal?

It takes work, my dear, and self-examination to heal.

Once again, don't sign up to look in the mirror and then get upset when you don't like what other people see.

Also don't quit when the going gets rough, and then whine about needing to heal ;)

FYI - If someone accuses you of being racist (which Kevin did NOT, he just gently challenged you on what you had done to challenge racism), or even just being racially biased, IMO, here's the best way to handle it ...

Now, as white people, we tend to get defensive, and give examples of how we have black friends, adopted black children, marched with BLM etc.

However, none of that means we know the black experience - so let's all try to resist that urge and listen, if we want things to get better - recognizing that even if you're not racist, you have been raised in a commercially racial-bias culture that has been ingrained in us and there might be some residuals, and it's in all of us - even the most "woke" white people :)

You:  "Oh, wow, I get it now.  I'm so sorry I offended you, I honestly didn't mean to.  I didn't realize it sounded that way, or that it might come across that way.  I didn't mean it to sound that way, but I AM a product of my culture, so thank you for pointing it out so I can be more self-aware of how I'm contributing to the problem without meaning to."

Now, I have seen, sometimes, where things really were a simple misunderstanding, especially on social media  - but that's why it's important to address it directly and immediately - ask questions and ask for clarification on both sides, in case something was simply mispoken or misunderstood - talking it through immediately before resentments fester, plus we all need to check ourselves before we wreck ourselves.

*Hop* off my soapbox/pulpit after rendering some tough love to my fellow self-proclaimed liberal/progressive white women, this Sunday ;)