Creighton Basketball Coach, Greg McDermott, To His Players: "Stay on the Plantation."

Creighton University's basketball coach, in the locker room, after a loss with Xavier on February 27th - verified by not only the players, but his fellow coaching staff - and himself  ... 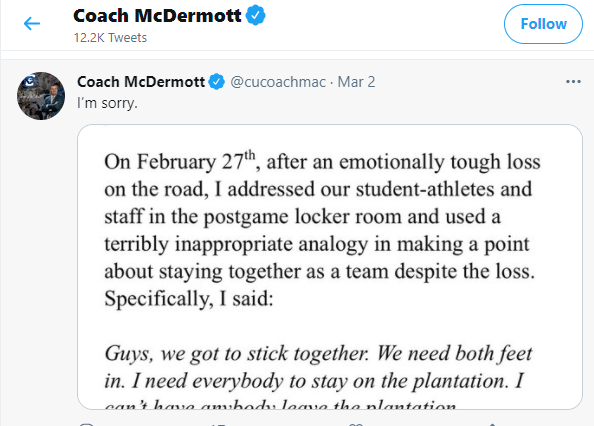 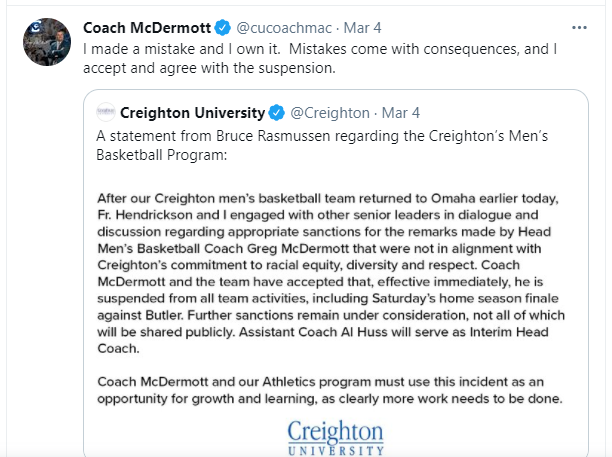 I literally drew in my breath, so loud that my husband came running in from the other room, when I heard that.
I guess I shouldn't be shocked anymore, after everything I've witnessed during the Trump era, but I was.
Because it would never even occur to me, to refer to my students, players, or employees as slaves on a plantation, and imagining myself as an overlord over them - no matter how mad I was - so I can't even wrap my head around him, or anyone, ever doing so.
Besides being blatantly racist, it's power abuse - which has also been rampant.
And I don't know about you all, but I'm getting super tired of people actually defending power abuse, and actually trying to protect horrible, hateful, bullying speech (as well as reputation-smearing) towards other human beings as "freedom of speech."
I'm also tired of same people calling anyone who doesn't just take it without question, speaks up about it, or defend themselves as "whiners," as well as trying to flip the script and try to make them the "bullies" for defending/protecting themselves.
Then, they call anyone who gives anyone behaving like this social, financial, or legal consequences "communists."
No - you want to know what real communists are like?  Go to China.
These are people defending/protecting themselves from truly horrible people, trying to play the false victim - and I'm glad for BLM, making people feel safer to speak up when things like this happened - because they never could, before.
And I think what pisses me off most, is my fellow Christians are the ones trying to protect it as "freedom of speech!"
You know dang well that Christ would never support legally trying to protect power-abusing things said towards other people - he gave sermon after sermon against speaking up to power abuse by the rich and/or powerful against the poor and powerless, whether it was within the church and/or politicians!
And considering he told the story of the Good Samaritan, he'd never condone it based on race!
And no, it's not simply a "mistake" - that analogy would never even occur to truly good people  - stuff like that only comes out of horrible people's mouths with dark and ugly souls.
Now - what to do about the tournament?
Creighton was doing so well,  almost in the NCCA tournament, which is just weeks away - so what happens now?
The coach is already suspended - so he comes back for the tournament?
If he's really sorry and it was a "mistake," I say his consequence should be they DO go ahead and fire him, but give the team a choice of whether they still want him to coach, but only to finish out the year for the tournament  - but without pay.
If he really "loves these boys" and sorry he is really sorry for his "mistake" - then he should still be willing to coach them to victory - without pay ;)
By Chrysalis at March 07, 2021