Sharon Gives an Apology - Piers, Of Course, Demands One (LOL)

Hopefully, this will be my last post on this subject, but since Sharon has since posted an apology, I thought it fair to update with it.

I had hoped Sharon would calm down and re-watch herself on the show (I posted the most intense moments in a clip two posts below) and reassess what happened  - she's too reasonable a person not to.

Here's her apology, make of it what you will ... 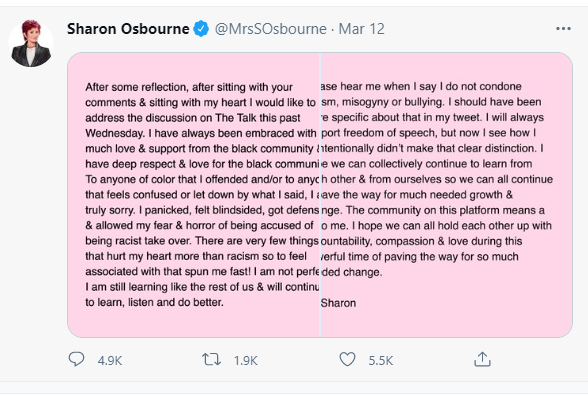 Now - you do need to know that before this apology, an internal investigation began into all of the hosts, to find out what, if anything, was said or happened between takes or backstage that may have led to the interaction we saw (see a clip of the most intense moments from the show two posts below).

Additionally, Holly Robinson Peete has publicly claimed that she was told that Sharon voted her down as a new host because she was "too ghetto" for The Talk, and apparently, that's been tacked on to the investigation, to find out if who told Holly that and if it was true.

I ... really hope that's not true, but we don't know.  It could be - whether she realized the racial implication at the time or not :(

As for her apology, it seems sincere - I only wish she had included Sheryl in it, but perhaps more time is needed.  I will say that she at least takes responsibility in that she panicked and was defensive because she feared someone there would call her racist (instead of realizing no one was) - and I think that's a very accurate description of what happened.

Piers, of course, has since tweeted this ...

First of all, can you imagine what he would've said, if Meghan had ever demanded an apology from him? LOL!

In fact, she has never said anything about him - and yet people still believe his smears, despite him openly admitting, several times (even just before this interview), that his main beef with her was mostly because she rejected/ghosted him as a friend, just before the wedding, three years ago, without explanation (cough, cough, stalker mentality).

There's nothing the scapegoat can say, or not say, that won't get twisted and ascribed the worst motivations (often, the bullies projecting their own motivations onto them), and any self-defense will only be used as "proof" that they are the bully, rather than the victim, reversing the order of events ;)

This situation also provides strong evidence of how women are complicit in misogyny/women-blaming themselves, aware of it or not, indirectly or directly, often perpetuating it in our culture themselves, even in something as seemingly innocuous as giving public sympathy/defense to just the male, in the situation, in "caretaker" dysfunction.

We can see this again, not only with Sharon's automatic defense of Piers (later clarifying she didn't agree with his actual opinion), but note the most vehement voices who clearly believe Piers about Meghan, and defending him - have come from women themselves  - however, that's a whole other post! lol

Secondly, did he even read the apology? Because that's not even close to what she was apologizing for.  In fact, Piers' name was never even mentioned, nor was he, or anyone else, even referred to.  She was talking about her own behavior on The Talk . (Perhaps that's what he's really upset about -  Sharon didn't make her apology about him ;)

Thus, once again, he projects his own falsely-entitled diva-ness, bullying, attention seeking, narcissism onto Meghan, as deflection off the fact that he is the only one we can visibly see is guilty of his own accusations.

Told you he'd flip the script, play the victim, and claim himself bullied and his freedom of speech restricted (and anyone that supported him) - because that's what bullies do. Then demand apologies. ;)

So ... he can falsely accuse, pay people for lies about the person, make fun of them, and maliciously smear them for three years in "freedom of speech" without apology (or response from her)  all day -  but if anyone even mildly criticizes him, he goes ballistic - demands they be banned from speaking and exiled, walks off shows, and apologies? lol.

And for goodness sakes, nobody "disgracefully slurred" him on the The Talk, I have a clip from the most intense part of the show, two posts below.  They gave an calm, honest assessment of their opinion of him, and it wasn't making fun of him, nasty, or malicious - it just wasn't positive; and yes, Sheryl said she does believe him to be racist because of things he said when he visited their show (which she didn't elaborate on) - but she said she didn't believe Sharon was racist, and said she told Sharon that, at the time.

However, I'll go further than they did - I think he is out of his freaking mind lol. Seriously - I don't think he's a well man - and I hope that he, himself, seeks mental health evaluation and services, real soon.

Because I suspect he's either a substance user or is just plain severely personality-disorder/mentally ill, or possibly both (it's hard to tell when someone is actively using, because they can behave personality disordered).

But enough about him, I don't plan on giving him any more attention, I think he's had enough, and it only enables him in his madness.

As for Sharon, I've written ad nauseum below about why I think she's defending Piers, and that I suspect it has more to do with her dysfunctional-family mindset than race.

And from what we can see, though Ozzy and Piers are nothing alike - I think Sharon at least temporarily reverted back to her making excuses, pretending, closing the ranks, protecting, and enabling of someone she loves, for a minute - Piers.

However, since Ozzy has stopped using, he says himself that all of the pretending and enabling wasn't helping him, nor anyone around him; in fact, it made things worse.

I don't know what Piers' problem is, but Sharon appears to be repeating the same pattern with Piers that she did with Ozzy - though again, Ozzy and Piers are nothing alike - not seeing reality and Piers for who he truly is.

Because even if Piers wasn't racist and misogynistic, his behavior would still border on stalker mentality, for smearing Meghan for three years after she ghosted him, though she hasn't said a word about him.

I can only hope that her apology was sincere, that she snaps out of it completely, and sees Piers for who he really is/reality,  real soon, and that Sharon and Sheryl are able to repair their close friendship with time.