So,  as I said, I've been "unplugged" for the last few days, briefly glancing at news; however, something popped up as a "recommended for you" video from YouTube (based on stuff I'd previously watched) about Meghan and Harry, and I unfortunately watched it :/

Yep, for the most part, social-media commenters are still nasty - just checking - talk about delusions of grandeur and narcissism!

A bunch of unqualified, armchair "physicians" with an inflated sense of self, who imagine they are qualified to diagnose anyone, let alone a person they've never met, never even heard speak until that interview lol.

A "diagnosis," mind you, which they admittedly made well before that interview, based entirely on tabloids and gossip rags, and from as remote a place as they could possibly be from "their patient" (*snicker*) and/or her royal-family group dynamic?

Thus, "physicians" - heal thyselves - from thy delusions of grandeur, elevated sense of self/narcissism, attention-seeking, and demanding just your perspective be heard as your God-given right to freedom of speech (but not Meghan's or any dissenters)  ;)

Thus, I chose instead to bypass those folks, ignore the nasties and respond to a person who commented as fact, to the tune of "No one had ever publicly 'attacked' the royal family like that."

I responded with essentially  "Did you ... not see the 1995 BBC interview with Diana? It was much worse."  (See below copy of that comment ;)

A different commenter responded, and it was refreshing to know that though rare, it is still possible to have a polite chat with someone on the internet, listening to the perspective of the other person to better understand, even if you still respectfully disagree overall :)

Note:   Despite these being public comments, I blacked out the original commenter's name, the name of the second commenter that I had the polite discussion with,  and any references to the presenters of this video or the name of the video itself.

That is to make it just a bit more difficult for the one residual "smearer" left of me, who likes to follow me around (even impersonate me) and cause trouble ;)

Thus, in addition to people being so rude and nasty, this is another reason why I rarely comment anywhere, anymore, and also why my comments remain closed (see the note under my profile in the sidebar ;)

Also note that there were other people's comments between ours (and I mostly ignore people just clearly wanting to fight rather than discuss, unless it just hits me the wrong way, on the wrong day lol), so I made screen shots of just our replies to each other.

However, this person was reasonable, asking me to look at other aspects that are questionable, so I did, and vice versa :)

Here it is, in its entirety - proving it is still possible for people to respectfully disagree without being nasty or personally insulting, in the interest of better trying to understand each other :) 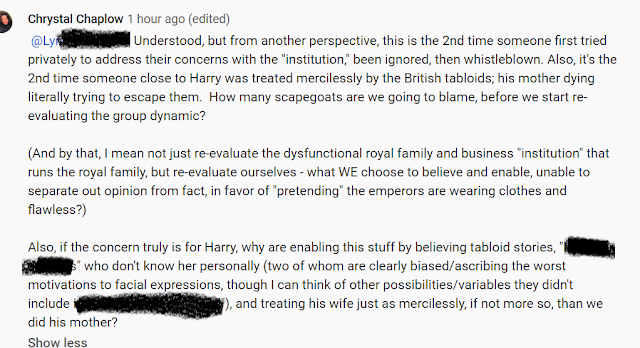 My last reply was a little lengthy, so I had to zoom out to get it all in, sorry for the smaller font - but at the same time, I hope it's read, because it's the point that I most wanted to make ;) 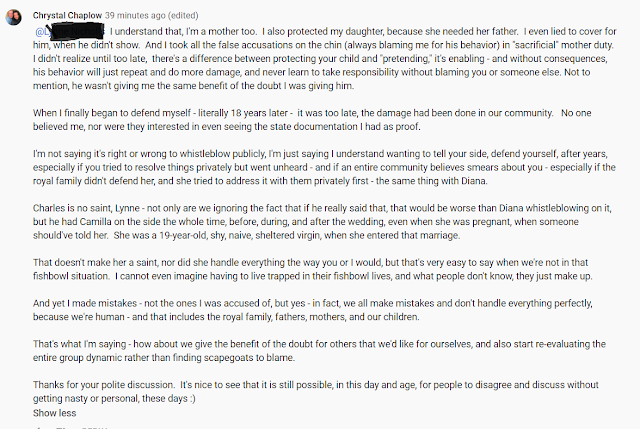 PS -  Now, I know that I've stated on here myself that is my opinion that Trump is suspect for being a narcissist and joked about it.

However - note that opinion is based on things I've actually seen him say, do, and Tweet himself, over the last four years -  not social-media memes, gossip, or tabloid rags.

Note that still, I have repeatedly stated that is my opinion, not a fact.

That is because though educated in psychology and sociology, originally headed towards being an LCSW clinical therapist, I don't have that license, or virtually clinical experience myself, so I don't have the actual qualifications to diagnose him or anyone else.

Even if I did have a license, a PhD, and years of clinical experience, it would still legally be considered just my personal, subjective professional opinion (since psychology is not an exact science, as nothing can definitively be proven, and observer personal bias comes into play, all too often).

Also, such diagnoses should only be made only after several in-person private evaluations over time, not based purely on piecing together videos and statements made here and there, as that would be an incomplete, biased, unfair, irresponsible, and unethical evaluation.

In fact, any actual licensed clinical therapist diagnosing anyone and stating it to others as a fact, rather than their opinion - especially without consent of the "patient" - risks losing their license over HIPAA violation and other legal ramifications.

However, I will say that if any public figure fit the DSM-V and other more in-depth college textbook descriptions of a narcissist, in my opinion, it would be Trump.

And yet still, that's just my speculative opinion - again, based on things I've heard and seen myself, from his own lips and Twitter account, live or on video - because I'm not qualified to make that diagnosis about anyone or state it as a fact ;)