I just watched Ted Lasso on AppleTV, this weekend, and I already wondered if the entire show (filmed in 2021) was a funny-but-sweet sort of  "I'm sorry - please take me back" love letter to Olivia Wilde - and then I saw his surprised, sad acceptance speech for best actor in a comedy or musical series at the Golden Globes that kind of clinched that idea.

A clearly surprised Jason wore a tie-dye breakup hoodie, had bloodshot eyes, and rambled to the point that his very close friend, Don Cheadle, who was also nominated,  not-so-subtly signaled him to wrap it up lol.  (Jason has since said that Don Cheadle was just showing him Kansas City love - I guess in a check yourself before you wreck yourself, kind of way - as Don was born and raised in KC, and Jason lived there as well, for a long time, and is still a KC Chiefs megafan.)

It wasn't because he was hungover or drugged out or anything like that (I don't think?) - but what we do know is he clearly is still reeling, after a trial separation from Olivia in early 2020, then Olivia announcing divorcing him in November, and is thus in mid-divorce cuckooland - and most of America just felt sorry for him and wanted to give him a big hug.

For those unaware of the backstory here, Olivia Wilde left SNL alum comedian, Jason Sudeikis in November, after 11 years and two children, for Harry Styles, 11 years her junior. 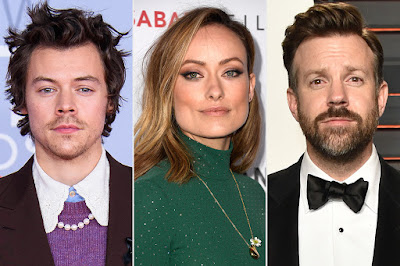 Now, before you say, "That B*tch!" - do realize that once upon a time, about 15 years ago, Olivia was the Hollywood "It" girl, but then met and married Jason and put her career on hold for him and their children.

She recently returned to her career, directing the critically acclaimed film, "Booksmart" - but Jason did things like - chose to party with his SNL friends at the SNL afterparty instead of accompanying her to the Spirit Awards, where she won for Best Director?

Yeah - erm - that's something you just can't take back, Buddy.

It was her turn, and she waited years for it - and if you're honest, that probably wasn't the one and only time you put yourself/your career first - more than likely, it was just the final straw time ;)

That's the thing about even self-purported liberal men - they still do things like this, believing themselves to be supportive of women -  not because they're bad people, but just because it's still ingrained in us all as a culture that the man's career comes first and a woman's sacrifice of putting her own successful career on hold for him and their children is still underappreciated/undervalued.

However, they are still very good friends and co-parents to their children, it's been one of the most amicable breakups in Hollywood.

Thus, if you haven't seen Ted Lasso, you should - because not only is it funny -  and you love quirky-and-sometimes annoying Ted by the end of episode 1, just for being the funny, smarter-than-you-think, underestimated, good-guy underdog that he is - but it's clearly also very supportive of women, as well as an expose on how cuckoo even normal people can get during divorce, as well as questionably about Jason himself still being madly in love with his ex-wife and children; however, his ex-wife is tired of things always being about his career; and at this point, still is his biggest fan, but just wants out of the actual marriage. 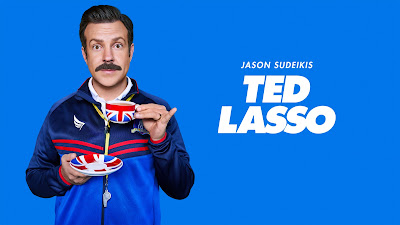 Aw, Jason, sweetness - one thing is for sure, buddy - you won't continually put yourself/your career first, after your talented wife put her career on hold for you and your kids for several years, right?

We know you're sorry and you didn't mean to, but you can't take stuff like that back - so chalk it up to a life lesson, sweetheart, and do your best to move on, you can do this - it will take time, but it will get  better, I promise - big hugs to you!

I'm pretty sure Olivia is still your biggest fan - she just needs the man willing to be her biggest fan, too - reciprocation, right?

Because as Taylor Swift hinted to us, Harry often talks a good pro-women game, but in practice, it's a different story; he's pretty used to being front and center and doesn't like to share attention with equally talented (or greater talented) women; thus, I suspect that he's just enjoying the uptick from PR he's getting for himself, just like he did with Taylor Swift  ;)

I predict it won't last, but we shall see - she may just be doing the cougar thing to feel more empowered and in control after being back-burnered a while - but that doesn't mean she'll return to Jason, either - in other words, she, too, has gone a little "cuckoo" and needs to return to center/balance, as breakups/divorce between two people who once genuinely and truly loved each other can often do to people  ;)

Also, thank you, Hollywood and press - for being kind to him about this, instead of your usual total-dick selves - he's clearly a mess and devastated going through this - proving even the funniest, most together, most loved people can break/go a little cuckoo sometimes - matters of the real-life heart aren't always things you can act and joke your way through, even if it's your profession  ;)

PS - The actual premise of the show, mind you, is that after coaching an underdog basketball team to the Final Four, he is asked by a British football (soccer) team owner (played by Hannah Waddingham) to coach the team, even though he knows nothing about soccer, under the guises of good PR because people love him, but in actuality, she wants the team to sink to passive-aggressively get revenge on her high-profile, publicly adored (but privately cruel) ex-husband (who loves the team) for cheating on her repeatedly, then dumping her (as well as getting his new model GF pregnant, but telling her for years he didn't want children until children weren't possible for her anymore.)

However, we learn not to be too hard on her, either, because underneath it all, we discovered she's not really the stereotypical British ice queen she's trying to become to protect herself - the pain and public humiliation of being publicly cheated on, and divorce itself, makes people a little cuckoo for a while, sometimes; particularly those in the public fishbowl celebrity world ;).

PPS - In other Golden Globe news, btw, Gillian Anderson did win for her spot on (and hilarious) portrayal of Margaret Thatcher in The Crown (damn straight - because if she didn't, myself and several thousand other people would be pissed), and Chad Bozeman won posthumously for Ma Rainey's Black Bottom (amen to that, too). 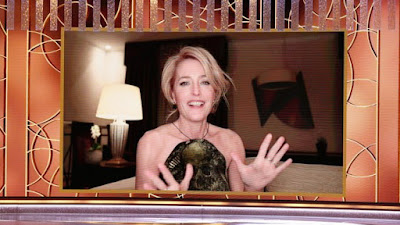 FYI, Gillian is bidialectal - meaning she can speak both British and American accents with absolute fluency and perfection - because she was born and was raised in Great Britain, but moved to the American Midwest as a teenager.

Last night, people weren't sure which accent she would use, and surprised many when she chose her American Midwestern accent to accept the award :)

As I said in the below post, I feel that - people often ask me where I'm from originally because I have such a mixed accent, being born and raised in Cincinnati, but I have lived in the South since 1987 - and my entire family is from here.

Thus, when I'm around Northerners, I tend to unconsciously adopt my Northern accent, but I get more Southern around Southerners (or when tired - because let's face it, a Southern accent is the lazier, easiest way to speak lol.)

But I'm not alone - I caught my Detroitian husband, who has now lived here for 11 years, drawling out his words a bit more and using Southern colloquialisms, just in the last year or so - but make no mistake, he can flip back into extreme Detroit/Canadian "eh?" and "Ah, geez" when talking with his family or watching hockey ;)