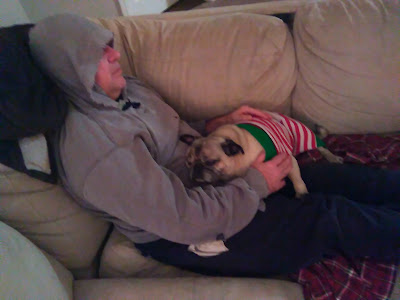 The mind is a powerful thing, isn't it?

Anyway, this morning, at that stage when you're just waking up, but not fully awake, Debussy's Clair de Lune ("Moonlight" or literally "Clarity of the Moon" in French) from Suite Bermagasse was playing in my head.

I hadn't thought of this song or heard it in a year. I couldn't bring myself to listen to it.

That is because it was part of the relaxation music I played, every day, for Snuggy to help soothe and calm him.  By that final week, the degenerative myelopathy had progressed to all but his neck and he could barely lift it and was starting to refuse to eat, which made it difficult to gauge the insulin.

However, when he heard this music, he would still rub his little round pug head against me in affection, calm right down on my lap, and go to sleep :)

Here's the full playlist I used to play.

Of course, the first thing I thought of was that it was Snuggy, letting me know he's watching over me, while I sleep in the moonlight, with with his favorite sleepy song - but of course, I know that it more likely is my subconscious reminding me and comforting me at the same time ;)

Either way, it worked - the thought of that song while waking up brought a smile and tears at the same time :)

He also loved smooth smooth jazz or New Orleans jazz, which I also haven't played since he passed.  He'd lift his little round pug head when he heard it, he loved it  Sometimes I'd even dance around with him, and he'd still wag his little curlicue tail :)

I couldn't find his favorite anymore, someone must've taken it down, but I found this by the New Orleans' Preservation Hall Band, which I think he'd like, too :)