President Biden's Address on COVID Pandemanniversary, After Passage of the $1.9 Billion Stimulus Package ... 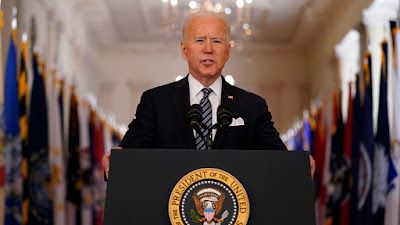 He's still speaking, but can I just say, though I love Biden, we now have a president that is so chill (sometimes even boring) that I can actually digest my dinner, and even walk away and do laundry for a few minutes, without fear of him saying something rude, selfish, belligerent, horrible, paranoid, or just plain crazy? :)

From what I've heard, I like everything he's said - with the exception of his Trump-style bragging about what he's done about COVID in the first month, saying: "No other country in the world has done this in that amount of time."

Ugh -  I am SO sick of Trump-style, overly-nationalistic rhetoric of "No other country in the world" and "greatest country" BS that I could stick a needle of pure COVID virus in my own arm lol.

(Okay, no, not really, that's not funny to even joke about, really - but I am super sick of it, after four years of that kind of talk.)

Now, I know why he's using that nationalistic-sounding rhetoric - because it works on overly nationalistic Trump idiots, and he's trying to win them over  - but still, could you just stop with that, please, Biden?  It's beneath you.  Thank you! lol

Now, now -  I dig you, Biden, and I appreciate all you've done in a short amount of time for COVID -  but don't start getting too big for your britches - we've had enough of that kind of "I'm so great/we're the greatest country in the world" talk over the last four years lol.

I'm not sure that boast over other countries' handling of COVID is true, nor would it be necessary to say so, even if it is true -  but you definitely should've checked before you made that boast.

Because if I'm not mistaken, I believe the U.K. mobilized in about a month, months before we did.  I know that wasn't your fault, that was the previous administration; still, I believe that not only did the UK mobilize it in under a month, but more people got it, quicker, and done more efficiently.)