A Week of Giving Back and Gratitude ...

It's been an interesting week, after the prior week's current events reminded me of a dark time - because this week, I had several reminders of the people who were kind and merciful to me, during that dark time - and an opportunity to pay them back in gratitude (though none of them ever asked me to).

Also, as I mentioned on here, about a year-and-a-half ago, I discovered a former dear friend of mine had died.  This person was living here in Lexington, but I had kept hoping I would be in a better place financially, when I saw him again, so that I could spoil him appropriately; thus, I put it off until too late :(

Since that time, I have been on a kick to let the people know, who really made a difference in my life, that they had, even if I seemed like a cheeseball - especially people who were kind to me during the darkest time in my life, when it seemed there was otherwise no kindness or mercy to be found.

So first, on Monday,  I completed extensive dental work that I hadn't been able to afford to have for years.  (Well, almost done - with the exception of getting Invisalign this summer and then a dental implant of a premolar after my teeth are straightened).

I first began going for cleanings in 2013, and when I first came in, I was afraid to even look them in the eye, I was so ashamed, so broken, really, and terrified of their judgment.

I hadn't had dental insurance is 20 years, and I never said a word about the situation I had been in until two years prior; and I didn't want to make excuses for not taking better care of myself - so I just thought I'd take whatever judgment they'd have to make on the chin.

I never said a word about that, but right off the bat, when we found I needed a root canal, my dentist told me she would be the last person to judge anyone, as she grew up on well water in the country, plus loved Snickers bars in high school and college, and had 2 root canals by the time she was 30.

My dental hygienist and I also connected immediately - besides sharing the same name, we found we liked so many of the same things from music, to food, to preferring mountains to the beach, to us both losing one of our beloved two dogs at the beginning of COVID (when vets offices were still closed) to our philosophy of giving people the benefit of the doubt and kindness, but both also learning to set better boundaries before it was too late.

So this past Monday, after 8 years there, and just being able to afford dental work I couldn't before (Mark's stroke in 2017 didn't help the financial situation)  - plus my dentist telling me previously that she often skips lunch, plus how tough things had been during COVID for them, dentists and the ADA having to fight to get the vaccine like other healthcare workers, despite being in people's faces all day -  I decided to bring the entire office a big bag of toasted Panera bagels and various cream cheeses, to show my appreciation :)

During my visit, I only told my hygienist privately (because I had the best connection with her) my fears upon first coming there of being judged, and that actually, I had been homeless during the recession in 2010 - but that she, and everyone there, had been so kind to me, so full of mercy, that it really helped me realize not everyone had become a judgmental twat lol.

She said she'd always felt a special connection to me, she's happy to see me on her schedule, and that I was loved there - which meant so much to me.

I didn't go into too much detail, and what I did share, I asked her not to, but also explained that as cheesy as it may sound, when you're in a dark place and there is no kindness, mercy, or light, that even the smallest kindness means so much, and I wanted them to know how much I remembered it and how much they were appreciated :)

She said, "You have grown so much from when you first started coming in - I just thought you were nervous about dental procedures, which is common; I had no idea it was this. But whatever it is, I always try to think 'you never know what the person in this chair is going through, so be kind; and if they're rude, just try harder.'  But you never have been, you're always so wonderful, we just love you, here."

We also talked about having the same name, but a different spelling - but there are two meanings for the name; one is, of course, "gem," but the other is the female version of Christ or "Christ bearer" or "fair, clear Christian" - and I told her that I could see both in her :)

Then we laughed about being saddled with those name meanings, being a lot to live up to, so we were like, "Thanks, Mom!"

But they also never let you forget what the goal is, on days we don't always live up to our names ;)

Thus, she just sent me this little card, and I know I'm a cheeseball, but I cried for like 10 minutes over it: 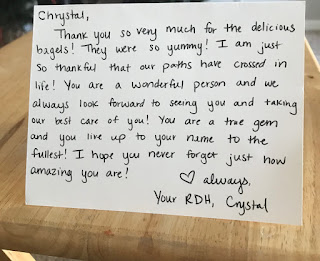 My husband just came over, put his arms around me, and cried with me.

He was like, "See, you deserve that.  And you needed that.  You ARE a wonderful person, and these are wonderful people you're connecting with now, they see you - they see through all the smears and lies in this town, they see you. Now you just need to see it yourself. "

Then, another friend of mine, whom I've referred to as my spiritual mom (whom I've been "paying back" over the last few years, when I could), asked me if I could help her order something for her pastor.  We don't always agree on politics or issues of faith, but her pastor was from always tremendously kind to me.  I remember once wanting to speak to him privately and asking him if he had a moment to spare later, and he dropped saying goodbyes to people at the church at the door to take a few minutes right then.

And the thing is, it wasn't just for me, he did that for everybody.   He says it's because he grew up rough, in Mexico (still has a scar from a knife fight), but God showed him mercy and he promised God that if anyone needed anything, and he could do it, he'd go right now.

Anyway, my "spiritual mom" asked if I would help her order something for him over the internet for his health that he couldn't afford, she'd pay for it.

Of course, I wouldn't hear of it - it was my chance to pay him back for his kindness that day, as well as continue pay her back for hers :)

(This was money from my paycheck, btw, not Mark's ;)

So I bought it and it's shipping as we speak.

We're not wealthy, now, by any means, but we're a lot better off than we were, or especially I was, during the recession.

And I just feel like the way that this week has gone has been more than coincidence - a reminder of not only how far I've come, but to give back what I have to those rare people that were simply kind to me, and showed me mercy, when no one else did.

If you are one of those people and are reading, again, I cannot thank you enough - and I firmly believe God used you as an angel in my life at that time, and I will never forget you - thank you!

It's just super nice after being reminded of a dark time the week prior, of a time where I was mercilessly judged like Meghan (to a smaller degree) to be reminded of the rare kindness people showed me then and be able to let them know how much they were appreciated  :)