Letter From Our Property Manager About The Shots Fired By Our Neighbor ...

( *Corrected typo in my reply) 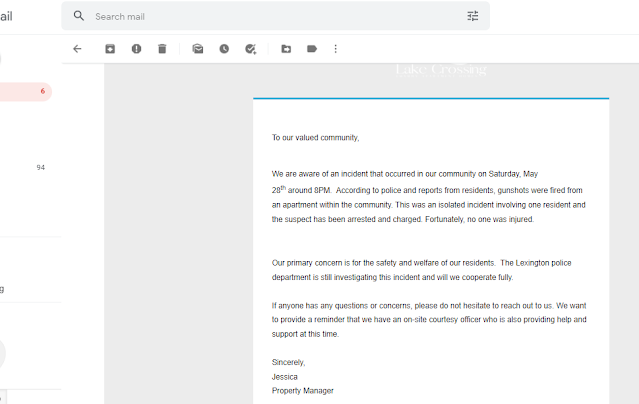 My reply ...
Hey Jessica - I'm so sorry this happened, here.  We were telling our new neighbors, XX and XY, that nothing like this has ever happened here in the five years we lived here, we've felt very safe.  Thank you for this letter, we were getting different stories.  That's the only thing I wish had been done differently buy police - they were letting people gather around outside  - including a child- instead of asking them to stay back, telling them nothing.  It would've been helpful to ask them to go back inside, if there was potential danger by an unstable person, rather than let people's imaginations run wild.
As for me personally, I have PTSD due to former domestic violence (NOT Mark lol) -  so my central nervous system is slightly pricked about feeling safe, but it will pass - and we'll definitely hang in here with you, hopefully for years to come - because , there's nothing you all could've done, you're great :)
You can't screen for something like that.  If they have no priors on background checks and a stable job, there's not much more you can do.  This is just the state of America today, nowhere is safe, unfortunately.
I know you have to be careful legally, but If there's any updates you can pass along, at least about this person's status as a resident, please let us know.   My concern is if  they make bail and come right back here.  I was told at one point, the police were crouching behind their cruisers.  If that's true, this person has some serious issues to point a gun at police and I'm sure there will be consequences about living here afterwards.  If this person returns, even briefly, please let us know?
There is one exception - if this was domestic violence, rather than some drunk idiot popping shots offi in the air, please consider NOT kicking them BOTH out - just the abuser/terrorizer?  Often the reason the abused partner doesn't leave is because they have nowhere to go.
Thank you for all you do,
* Typo - that was meant to be "NOT kicking them both out"  (in the case it turns out to be domestic violence), which has been corrected in the copy of my email, as well as a PS email to the manager as well.
I wrote that because it is common in these situations to kick out both the abuser and the victim, due to fears of the return of the abuser - but in these cases, the victim often has nowhere to go.
If it is domestic violence - which we're not sure yet, but appeared more like some idiot firing off in the air - the best place for the victim would be a shelter at an undisclosed location, but an eviction on the victim's record would prevent renting in the future, as well as cause uncomfortable personal explanations for the victim.