Why The Entrance of Cheaper Biosimilar Insulins to the Market Didn't Lower the Price ... 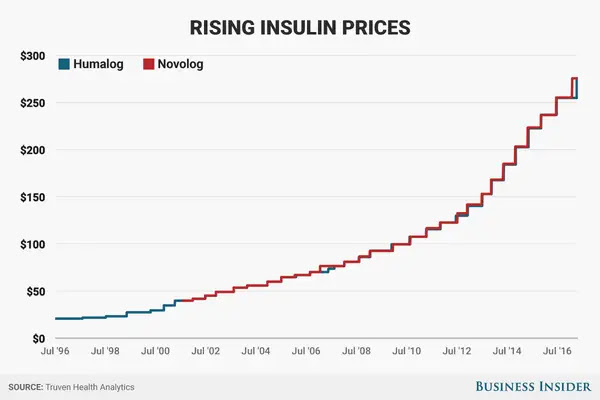 Thus, I know a little bit about what has happened in the market with insulin over the past few years - probably enough to be dangerous, but here goes  ;)

So, as we know, the way a normal market economy is supposed to work is that you have the originator product, and then similar-product competitors come along and they compete for the best price, bringing the price down.

HOWEVER - that is not (necessarily) the way it works with pharmaceuticals in America.

As we know, the price of basal insulin began to skyrocket about 5 to 7 years ago, to the point that some states have mandated state legislation that no person on Medicare will pay more than $50 out of pocket for their insulin, meaning the health-insurance companies, their PBM (pharmacy-benefit management companies) that contract  with the manufacturers for them (if they use them) or the manufacturers themselves will have to eat the difference in cost .

That is because there was basically only company who made insulin, which in fact is a large molecule and more difficult to make than you might think - but not $1,000 a month difficult.

That company was Sanofi with the brand name "Lantus," who also fairly recently came out with another formulation with stronger potency, called Toujeo.

Now - before I explain what has happened so far, you need to understand two terms.

The WAC price -  or wholesale acquisition cost -  which despite the "wholesale" part of the term is actually like the sticker shock on a car - nobody actually pays that due to contract negotiation.

The net price - the final price after negotiation of discounts, rebates, etc.

Now, since the national news began reporting on the skyrocketing cost of basal insulin, over the past five years,  other companies have created biosimilars for insulin.

1) Basaglar - a biosimilar that did not apply for or receive interchangeabillity status with Lantus from the FDA.

2) Semglee - a biosimilar that did later receive interchangeability status with Lantus from the FDA.

Basaglar came first, but did not drop the price - they just offered contract discounts and rebates for their products, which some companies took and other didn't, depending on how much steeper Sanofi was willing to go on Lantus with that particular company (essentially, how many Sanofi products that insurance company contracted for or were willing to now contract for ;)

Then came Semglee - which came out at at nearly half the WAC cost of Lantus - around $450.

Interestingly, virtually no one has taken them up on this half-price basal insulin except certain Medicaid plans in certain states.

Now, you would think "Why, when Semglee is half the price cost of Lantus?"

Well, that has to do with contracting.

Sanofi, of course, is a multinational corporation and thus has a lot of tools in their toolbox to make sure they keep the market share and can afford deeper discounts, being that they also make hundreds of products.

These tools include steeper rebates, discounts for portfolio contracts (discounts if other products are contracted on), creating a cheaper, authorized generic of their branded product themselves, etc.

Others will say, "We don't care how you do it, the net price just has to be X amount, or else we'll make you step through one, two, or three other products first."

But the biggest problem is, despite what commercial and private health insurance companies may prefer, most of them use a third-party company called a PBM - a pharmacy-benefit manager-  to manage their pharmaceutical plans.

These are large pharmacies that  initially did mail-order bulk, but now manage the pharmacy plans for health insurance companies as a third party - including ESI, Optum (for United Healthcare), Accredo (for Cigna, now owned by Cigna), CVS Caremark, Walgreens, Express Scripts, and others.

At present, PBMs depend on high WAC/high rebate for their income - in other words, big rebates is how they make their money, their entire profit margin is designed so that it depends almost entirely on these rebates.

Also at present, PBMs are not under the same legislative requirements as commercial insurance companies, so they can legally extract a high profit margin  - and there is virtually no transparency about what that profit margin is or where it goes.

Public and private insurance companies that have contracted with  PBMs to manage their pharmaceutical plans only know what "leftover" rebates they will receive after the PBMs take their first cut of rebates - but no one except the PBMs know how much that is because unlike insurance companies, they are not required legislatively to report this to Congress or anyone else, except on their taxes (and we all know how THAT goes for corporations ;)

Additionally, the distribution companies they use must have a certain amount of cash flow on hand to manage supply chain to ensure there are no shortages, which requires part of that rebate (which no one knows what that is).

Thus, PBMs are in no big hurry to change this structure ;)

(However, some Medicaid and Medicare plans in certain states have chosen to boot their PBM and create a GPO or an IDN network, which I'll talk about in a minute - and this is just beginning to have an effect.)

Thus, this is why Semglee didn't fly - they came in at a low WAC with a small rebate - so PBMs didn't want it because they depend on those rebates for income.

So Semglee got smart - they came out with their own authorized generic formulation of their product, and also applied for - and received - an interchangeability designation with Lantus.

Meaning now, health plans and PBMs now have a choice:

If you want a high WAC/high rebate, you get their originator plus a steep rebate.

Both will net at about $250, it all depends on how your plan is structured to receive profit margin.

(Yes, it's really the same product, just a separate NDC number, brand, an authorization process through the FDA).

Thus far, two companies have been takers, but it has yet to catch on - we shall see - but this is considered a super smart "test" of the market and whether this strategy will change it and indeed lower the price of insulin, and pharmaceuticals in general.

Now, I mentioned above that some private and public health insurance companies are booting their PBM because of lack of transparency on profit.

So what are the alternatives?

1)  If you're a large national health plan and can afford it, you can /acquire a PBM and control the PBM yourself (as Cigna has done with Accredo; thus, Accredo as a PBM is not subject to the same regulations as the insurance company itself and Cigna can see these rebates and control them and has a direct say on contract negotiations with pharmaceutical manufacturers.)

2)  Your large-scale health network of hospitals and clinics can become an IDN - an integrated-delivery network - that contracts and buys and bills with the manufacturer directly for their own pharmaceuticals, including having their own specialty pharmacy for higher-price specialty drugs, and often distributes them, including bulk mail order.  They often also offer a health insurance plan as well, though sometimes just for their own employees.  They still offer varying health-insurance options and pharmaceutical plans, but as far as what they stock on hand, they go with their own, and a separate private health insurance company can choose which is cheaper for that patient.

3)  Join a GPO - a group-purchasing organization - similar to an IDN, but initially for smaller groups,  just a league of independent physician groups and smaller clinics that banded together to contract directly with manufacturers.

They prefer low WAC/low rebates - in fact, they just want the lowest overall net price upfront and to heck with  the rebate game.

(They are still open to "portfolio" contracting discounts, however.)

This last option is growing in popularity, such that even large-scale IDNs are forming GPOs in addition to their current IDN contracts, and a few states that broke their contracts with PBMs and booted  them out of public insurance in their state have since opted for GPOs for public insurance.

In fact, I heard just recently that a very large PBM now is offering a GPO plan themselves trying to compete with GPOs and it's affecting their previous rebate structure which was dependent on rebates, so this should be an an interesting ... experiment lol.

In a nutshell, that is why the normal market rules do not apply for pharmaceuticals in America, which does not exist - at least to this extent - in Europe and other countries. in which these same drugs don't cost even close to what they cost in America.

Since our country is so terrified of price regulation in any form as "socialism," the only way to change the game is to do things like Semglee is trying, as well as GPOs instead of PBMs (or legislative requirements for PBMs to offer more transparency on their rebates).

Well, I hope I explained that right/well enough, and that it makes things a little bit clearer, anyway :)

PS - You might want to remember this explanation next year, when Abbvie loses is it's exclusivity patent for Humira (adalimumab), on about 14 of its 20 indications (including RA and psoriasis) - because there's about 7 to 10 biosimilars coming out, some that are interchangeable with Humira and some that aren't.

It's going to be all over the board, varying from insurance company to insurance company, and perhaps a big fat mess ... and a fight to the death to get on formularies - a fight which Humira already started in suing several of these companies because they hadn't lost their patent yet, despite the fact that they weren't planned for release until the year they did.

The variation will likely make the national or even international news, so keep on the lookout for that, which will reveal even further that variation in rebate problem we have in America and cost of drugs versus other countries.

On May 24th Blue Cross Blue Shield (Commercial/Private insurance company) announced that they would be partnering with Civica Pharmaceuticals to introduce an affordable insulin.

In this way, the insurance company can bypass the PBM to contract directly with a pharmaceutical company to produce and distribute for affordable insulin at a low net cost without playing the rebate game - theoretically, that is ;)