"There is God ... And Then There's The Peaky Blinders" - Final Fights, Final Season

Season 6, the final season, drops on BBC One at 9 p.m. in the UK.  Unfortunately, we Americans will have to wait a month or so to see it, but apparently, in addition to facing the usual suspects, Tommy faces his biggest threat yet - the rise of fascism/Nazism - and comes to America?

We shall see ... unfortunately, all of this without Helen McCrory :( 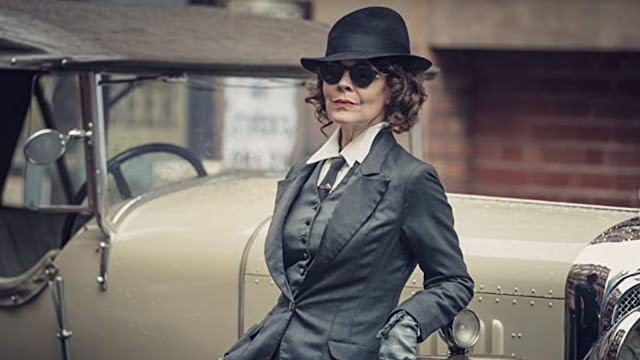 If I'm quieter, no worries, I don't have COVID lol - work has cranked up, especially with Humira's patent officially expiring in January 2023, for most of its indications.

The FDA approved several of these a while back, but they never launched, because AbbVie sued each and every one, because they hadn't officially lost exclusivity yet.  Most of these are now being settled.

Now, you may be asking yourself, "How can they do that, isn't that a monopoly and violating anti-trust laws?"

In an ordinary market, yes - BUT - the market rules for the pharmaceutical market are different than regular market rules.

One of the ways pharmaceutical-market rules are different is that new pharmaceutical innovations, with new mechanisms of action, can apply for a patent of exclusivity that typically only lasts a few years.

However - Humira found various ways to extend its original exclusivity patent from 2002, by adding on a new disease indication, every year or so, enabling them not only to extend their exclusivity for 20 years, but to sue any biosimilar competitors.

So you see, it's literally been a 20-year wait to allow competition -  meanwhile, the price of Humira just kept going up and up.

In fact, I'd written previously on here, somewhere, that I'd thought Humira had finally lost its exclusivity a few years ago, but I was mistaken and should've double-checked  - because every time Humira's patent was about to expire, Abbvie was able to extend Humira's exclusivity patent by adding a new disease indication.

So it'll be interesting to see how this plays out, how these affect prescribing habits, the market share, and the price, that's for sure - considering varying rebates offered to insurance companies and PBMs, we don't know if the price for the adalimumab molecule will now drop much.

For example, the price of basal insulin hasn't dropped much, despite the entrance of  a couple of biosimilars, one even being interchangeable.

There are a couple of reasons that the cheaper insulin "knock-offs" haven't worked yet, for lowering the price of insulin - and it was NOT because they aren't just as effective and safe as the brands

The first reason is - rebates.

So the new insulin biosimilars simply came in at a discounted, cheaper list price than the brands - and not that much cheaper - without offering any rebates at all.

However - most insurance companies and their PBMs now depend on these rebates for their projected budgets.

Therefore, all the the brands  had to do was simply offer steeper rebates -  making the brands actually cheaper than the "knock-offs" at the end of the day.

Also, there were only a couple of entrants in basal insulin, rather than several entrants, only offering slight discounts, and one or two usually doesn't do it in pharmaceuticals, it has to be several competitors to make price change.

However, adalimumab is a whole different ballgame, with several  indications and several biosimilar choices coming, not just two or three entrants, so we shall see.  It'll be a fight to be top dog, though, that's for sure.

BTW, all of this is public information that you can Google yourself, so it's not like I'm spilling trade secrets or private info here, it's common knowledge lol.

I'm also NOT knocking Humira - adalimumab, though not the first monoclonal antibody, has been one of the best, since 2002.

Humira has truly been a wonder drug, because it's extremely effective, for many people with various autoimmune diseases - it actually performed better in the real world than in clinical trials, which doesn't happen very often.