Not as good as the first one, but nothing is  - nevertheless, it was a fun walk down memory lane, for us 80s kids :) 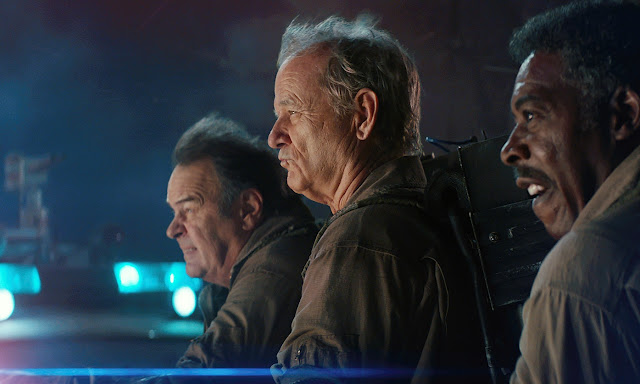 Ray, Peter and Winston are there - with Egon in "spirit" (courtesy of an actor, makeup, and CGI). In fact, the entire movie is a beautiful tribute to Harold Ramis (and yes, I admit it, I teared up lol).

Directed by Jason Reitman, the son of the original director, Ivan Reitman (who coproduced this film), he got as close to the feel of the original Reitman camera angles and 80s "doodley-do" mystery music during scenes.

It's funny - though a movie buff, with a great memory, there are very few movies that I actually remember seeing at the theater, and who I was with, growing up - but one of them was the first Ghostbusters :)

I remember who I was with for what movie and where, for the last 25 years or so, of course, but not every movie while growing up - but the other ones that I remember who I was with and the theater, etc., are the original Star Wars Trilogy (all three, my sister, Kim and Jackie, Margie, and Kim and Jerrie-Lynn), Raiders of the Lost Ark (Darlene), Star Trek: The Wrath of Khan (Michele C),  E.T. (Darlene) Planes, Trains, and Automobiles (Anthony),  European Vacation (Lissa H),Christmas Vacation (Brian C.) and Batman Returns (Scott S).

(Only one of those was an actual date, actually - once upon a time, before a lot of stuff happened in life, I had a lot of both girl and guy friends, back in the day lol.)

I think those were memorable because the theaters were packed and the audience really reacted loudly, they really laughed out loud and/or cheered for the characters versus some others - or maybe because I just really loved those movies?

Anyway, I remember it very clearly - I saw the first Ghostbusters my freshman year of high school, with my BF, Heather P - both of us just cheering and laughing hysterically :)

(FYI, not the same Heather mentioned in the Anne Frank post, that was Heather M, who was a year younger, and whom I didn't meet until my junior year - I had two BFs named Heather in high school ;)

I can't even remember the last time I laughed at loud or cheered at a movie at the theater.

I think it rarely happens anymore that the theater audience reacts  loudly, like that, to the screen anymore - we just sort of sit there and chuckle, maybe one person in the back says "woo hoo," but no one ever really cheers.

I don't know if that's a commentary of the quality of the movies or of us, but going to see movies at the theater used to be like an event you looked forward to, it was a fun, interactive thing to do.

Then again, I barely can remember the last time I watched a movie at an actual theater, thanks to COVID lol (I think it was Jordan Peele's "Us" in 2019?)

I hate to sound like my grandparents, but it's true - we don't make 'em like that anymore, or at least it's rare - the winning combo of both a good story AND special effects, that also makes you laugh out loud :)

PS - Watch for Sigourney Weaver in the mid-credits at the end, and make sure to watch the scene at the end of the final credits - and yes, she and Peter are still together, married in fact (says the ring on her finger) ;)