The NFL MVP Award SHOULD Have Gone to ... 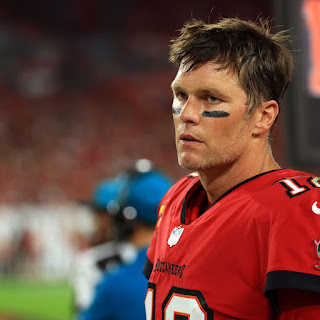 The 7-time Super-Bowl winning quarterback, arguably the best QB of all time - who despite just retiring and not making it to the Super Bowl again this year -  still at least consistently played like a champ and was more deserving of that award, based on actual performance.

Even if we're now apparently giving it to people based on legacy alone, rather than the current year's performance - then he still should've won it on that basis, too.

Or what about Joe Burrow, who though only in his  second season, is taking the Cincinnati Bengals to the Super Bowl?!? 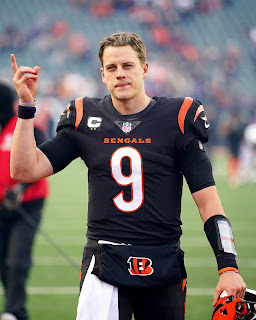 Again - he's only in his second season - that's almost unheard of.

But no - instead, it went to that d*ckhead, Aaron Rodgers - who, in addition to not making it to the Super Bowl either, this year, and only having 1 Super Bowl win, back in 2011 - now  looks, speaks, and sometimes even plays - like a crackhead ... 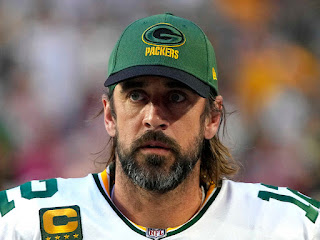 Excuse me, I just had an involuntary-vomiting reaction.  I feel better now ;)

Okay, so even if we put aside his mouth and his anti-vaccine comments and just focus on his actual performance -  he clearly lost focus, this year, for whatever reason - he did NOT have a stellar season, it was kind of hit-and-miss.

Yep, just in case you've forgotten the NFL is run by a bunch of corrupt white good ole' boys, who increasingly openly support fringe, far right-wing politics  -  and who despite having more black offensive/defensive team players, still only have 10 black QBs out of 32 (who've only won the MVP 4 times, the first time not until 2003) - and only 1 black head coach (even less than the NFL had in 2011) -  there you go as a reminder,  ;)

This makes his 4th MVP award, behind only Peyton Manning, who has 5.

Where does Tom Brady -  the most Super-Bowl-winning quarterback in history, mind you - fit into that NFL MVP legacy algorithm, you may ask?

Tom Brady has only won the NFL MVP  3 times.

As for Joe Burrow, he was given a pat on the head, receiving the "Comeback Award," which doesn't even really make any sense, except that he had an injury last year, but rehabbed it in time for the 2021/2022 season, and it's a big comeback for the Bengals in general.

*BTW* - Unlike the NFL MVP award, my opinions are not an endorsement for any of these quarterbacks as people -  nor are they based on their political opinions.

In fact, they could all be d*ckheads as human beings, or Trumpers (which is kind of the same thing), for all I know - I really don't know, nor do I care, what their politics are.

(I learned that lesson the hard way, after Aaron Rodgers, who used to be on my fantasy co-husband list for sports, but I recently fantasy divorced him, because he started looking, speaking, and sometimes playing like a crackhead).

Not being a football fan, my opinion is based admittedly on just a 30,000-foot, high-level, bird's eye view of their actual individual performance this year   - because even though I'm not a fan, my husband is, and ESPN is his default channel lol.

Regardless, this proves these awards are becoming increasingly political, ladies and gentleman - and that the Greenback Packers really, really hope he doesn't retire.

I hope he goes away, never to be seen or heard from again.

And though my husband is a bigger college FB fan than NFL, he usually watches the Super Bowl, but he's vowed not to watch it this year, because of what the NFL has become - and because they keep pushing the date back for the SB, so that it's now held on his birthday weekend!

Speaking of which, I bet the ladies just love it that their husbands and boyfriends will be all hung over, from the night before, on Valentine's Day, if they even wake up at all for it lol.

PS - Mark and I are moving to Europe, see ya!
PPS - Just kidding, we wish.