Some Crazy Anti-Vax Dude In the Parking Lot - Bye, Have Fun Storming the Capitol, Buddy!

So I'm sitting here transcribing, like I do, albeit it slower because of a mini-migraine, when I hear some dude talking about as loud as he could outside.

I go outside to see what's going on and who it is, only to realize he doesn't live here.  He's apparently waiting for someone, but has his car door open, talking so loud on his phone that he's practically yelling.

What he was doing was reading articles about the Canadian truck convoy over the vaccine mandate, to someone on the phone, on speaker.

He's like, "They've descended on Ottawa and what Trudeau needs to do is surrender. The Canadian government needs to surrender! Surrender to us, Goddammit!"

I didn't say anything, but was thinking ...

Dude - may I remind you that we live in the U.S., not Canada, and we have no universal mandate?

I can't speak for Canada, but as for U.S. -  we're not surrendering sh*t, to your disinformed, paranoid, angry-Karen, crazy ass lol.

Geez, stop talking so loud, man, and at least shut your car door - I'm trying to work, here, plus I have a migraine - and you do not want to have to deal with me when I have a migraine, I'm far less patient lol.

Then my neighbor comes home, who is a basketball coach for a  local private Christian school, and I realize he's here to talk to him.

So I go back to typing, when I still hear this guy, talking as loud as he can, even louder now, because he's closer.  Though L lives downstairs, I can still hear him as if he's right outside my door, so I turn my audio up.

And yet I can still hear him.

I go to the door and open it, trying to determine if he's trying to start something with L, ready to call the management office if so.

I realize that L hasn't let him in - smart move.

So they're talking outside in the breezeway.  Something about not receiving a schedule?

Though this guy is talking loud, L gets actually gets quieter, he stays very calm, but also not his normally friendly self, with this guy, basically just informational.  Because he got quieter, I couldn't hear what he was saying, but something like:  "Okay, well, I'm sorry if you didn't get one, it wasn't intentional.  That's why I posted the schedule at the website, just in case, but here's a copy if you need it."

The guy was trying to be polite, trying to hide his very clear anger and paranoia with everything, but it was very clear he was fit to be tied.

Mark reminded me that L was not only smart, but a former marine, and would have no trouble keeping this loud-mouthed, skinny, whimpy white guy in line if he stepped too much, and to just lock the door and where the mace was, in case it was needed lol.

(I also took his license plate number down, just in case lol)

He finally left, thank God, I'm not sure what his problem was - we don't typically have people like that in this community.

Whatever - have fun storming the castle (or the capitol), buddy! 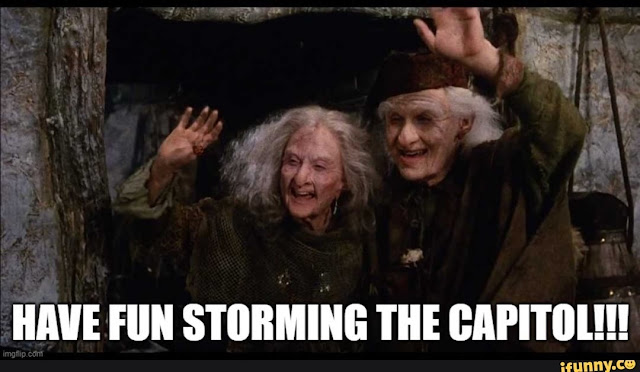