Let Us Count the Ways - Top 8 Ways Trump-Republicans Undermine Their Own Otherwise Valid - Even Constitutional - Arguments ...

So ... Trump went to court to try to hide his WH visitor log and phone records (including cell phone records) from January 6th from the congressional investigation, citing "Executive Privilege" - but lost.

He also tried to argue that giving those White House visitor logs was "a threat to national security."

Okay, first of all - what does that even mean, Trump?

Who in the heck would ever be visiting you the White House, who'd ever be considered a national-security risk?

Because, yeah -  we'd definitely need to know about that.

And helllllooo - I'm pretty sure  January 6th was a threat to national security, which is why it's being investigated?!!

Thus, President Biden has requested the National Archives to release them at the request of the January 6th Congressional committee.

(By the way, in case you were wondering, both Obama and Biden's visitor log records are already public.)

So at present, let's make this the #1 argument below (though it also fits some other numbers on the list).

These are the Top 8 Trump-Republican arguments that sound plausible, reasonable, and valid (except for #8, which makes no sense), even constitutional  - until you realize they never apply to themselves ;)

1.  "We want more transparency in Government."

It's also an undermining of argument #5, but we'll get to that.

2.  "When protesting turns violent, results in theft or damage of public or private property, or blocks people from doing their jobs, it's not constitutionally protected peaceful protest, it's a riot by thugs.

Therefore, even non-law-enforcement private citizens, even if underage, should be able to legally "Kyle-Rittenhouse" them, in order to protect public or private property or in self-defense" 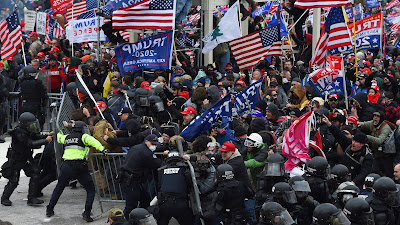 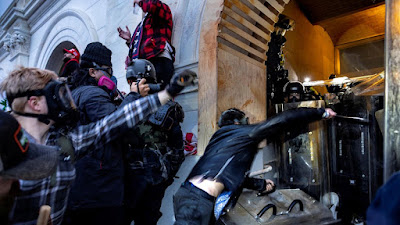 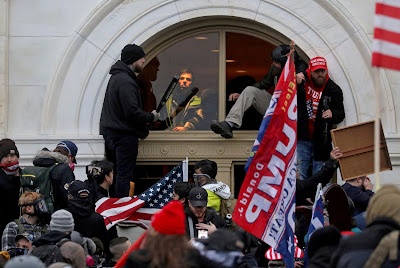 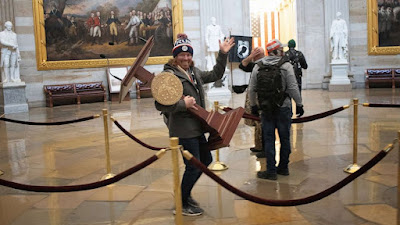 "But it wasn't us, it was Antifa!  Okay, okay, - it WAS us -  but it wasn't a violent insurrection, it was 'legitimate political discourse!!!'" - so sayeth the RNC.

Hahaha!  Oh - they're serious with that.

So, erm - so the word "discourse" means spoken or written conversation and/or debate - when exactly did anyone engage in "discourse" at the capitol on January 6th?

Regardless, according their own argument above, then it should've been okay for  Capitol police to shoot Ashli Babbitt, then, yes? ;)

Because despite the fact that Ashli unlawfully broke in and entered the capitol building, climbed up and damaged interior property, and allegedly was warned by legitimate capitol police to stop of they'd shoot - Ashli is still considered an "innocent murder victim" of government law enforcement, according to Trump-Republicans.

Exhibit B - The Canadian truckers' protest blocks the Ambassador Bridge, from Detroit to Canada, preventing commuters and American truckers from getting to work or doing their jobs -  which includes transporting  life-saving American medicine and medical equipment to Canadian hospitals   ... 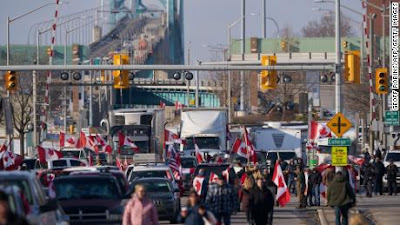 3.  "Government has no business monitoring or meddling in our private lives and our private choices."

Okay - then shouldn't the issues of gay marriage and abortion be less important to you, instead of more?

Not to mention, "the government" has requested that you wear a facemask as at least some barrier of protection in public buildings, to protect yourself and others from a deadly virus - masks which, mind you, actually makes you harder to identify!

Also, unlike countries in the EU,  there is no national registry and QR code for who has been vaccinated and who hasn't - and you still aren't legally required to show proof of vaccination to public agencies.

4.  "Freedom of the press, speech, expression, and religion for all."

Apparently what they really mean is, freedom of the press, speech, expression, and religion is only for themselves, only when they're being rude, insensitive, hateful, verbally abusive, racist, misogynistic, or homophobic - and especially when they lie or falsely accuse others without proof ;)

Apparently, they also think you should be allowed to stalk behind even peaceful protestors with an AR-15, even shoot them, without legal consequence, support the president tear-gassing them, and boycott all reputable free press, music, and movies that are "woke" and only listen to their political press and pundits, as well as people you don't even know, and you aren't even sure really exist, on Twitter and other social media

Oh, and you better say "Merry Christmas" instead of "Happy Holidays," trying to be sensitive to others beliefs, or you're not a real American Christian (dammit)!

5.  "The government should not overreach and have too much power."

But apparently, it's okay that the president gives out Executive Orders like candy, like a king, trying to overturn democratically voted-upon legislation.

Executive orders were supposedly a terrible offense when a black democrat was POTUS, but it's A-OK and then some, when it's one of their own.

Oh, and again, apparently it's okay to use the military to tear gas even peaceful protestors, even shoot them, as long as they're people of color or Democrats ;)

Thus, the definition of "big government" to them appears to only mean they can't say and do whatever ugly, untrue thing they want, commit any number of consumer cheats and frauds, employee exploitation, and power abuse crimes they want, and even shoot people  -  as well as they can't avoid paying their fair share of taxes, relative to their actual income, because they don't want to provide even a dime to help other people, including healthcare.

6.  "The wealthy friends of Jeffrey Epstein, who sexually trafficked and abused underage girls, should be prosecuted and go to prison; if they didn't, but knew about it, then they should still be held accountable for not having done anything to stop it. "

And yet we all know, or should know, Trump himself was very good friends with Jeffrey Epstein, even being quoted by New York Magazine in October 2002 as saying "He (Jeffrey) likes them on the younger side," - but his supporters have no interest in even questioning him.

Therefore, it would appear that Trump-Republicans only seem to care about investigating and prosecuting for sex crimes involving children if it's a Democrat, a person of color, or a foreigner.

We tried to warn Republicans about Trump's friendship with Epstein,  and that he literally said that back in 2002 -  14 years before he was elected, 13 years before he even ran - but they didn't care.

7.  "The flag is sacred and should be respected - kneeling in front of it is disrespectful" 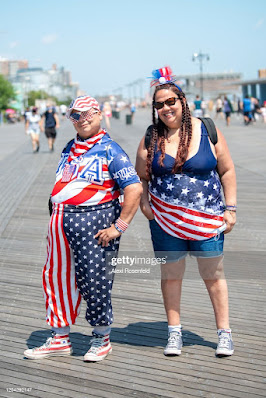 And perhaps the flag shouldn't be used as a weapon, either, - metaphorically or literally - especially not on our own people! 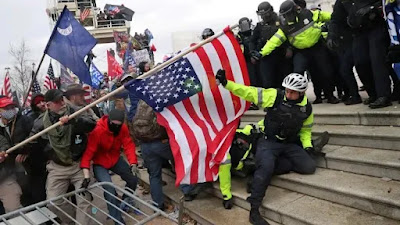 In fact, we periodically look for homes for when Mark retires, and if we see an oversized flag hanging off the house, we quickly scroll away lol.  That's sad, it's come to this, but weaponizing the flag, and making it synonymous with the worst of America, and with the worst representative of America in history (Trump), disgusts me.

8.  "COVID is a Democrat hoax ... no, wait, it's real, but Democrats created it; therefore, I'm not going to take any common-sense health precautions to protect myself, because the protections against it were created by Democrats, too."

Okay, that isn't a sound, valid argument from the get-go, because it's circular logic - it doesn't make any sense, no matter which way you look at it, so I won't even try lol.

There are so many more, but that's all I have time for today.

So as you can see, most of these things (except for #8) may sound plausible and valid - but they clearly don't mean them - or mean them only when it's someone who doesn't agree with them ;)