Neil Young/Joni Mitchell VS. Joe Rogan/Spotify - And The Ambulance Blues 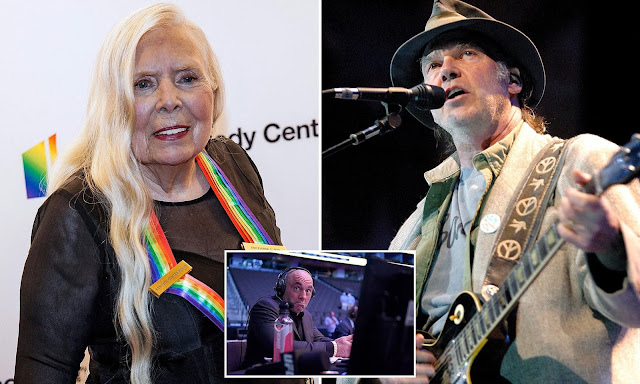 Unless you live under a rock, you have heard by now that Neil Young gave Spotify an ultimatum - either Joe Rogan and his disinformation podcast or his music - "Either he goes or I go."

Well, considering most people under 30 don't even know who Neil Young is -  and Spotify has a multimillion-dollar contract with Joe Rogan for his #1 podcast on Spotify - Spotify basically said "Bye, Neil" and pulled all his music.

Then Joni Mitchell asked for hers to be pulled in solidarity with Neil.

Now, those of you under 30, you have no idea how significant this is.

Neil Young and Joni Mitchell were two of the most important protest voices in the late 60s and early 70s against Vietnam, imperialism, and anti-oppression.

So although you may not think it's a big deal and not care, and even Spotify does not - the Baby Boomers from that era, who still distrust Democrats because of Vietnam (not realizing the party has changed, though loyalty should never be tied to a party anyway, as things change over time - it should be about current platforms and people), and incredibly support Trump and anti-vaccines stances - do care and are listening.

Apparently, lots of people really like Joe Rogan as a person, interpersonally, so there's lots of surprising support for him on social media, a lot of people saying things like, "I don't agree with you, but go Joe Rogan."

As for me, I just wish Joe would go visit a COVID ICU, compare the  numbers for the unvaccinated, vaccinated, and boostered, himself.  He could even poll the patient families to find out if they were vaccinated or not.

All his questions would be answered, he'd find out that he's completely wrong, then go away in shame, never to be heard from again.

But he doesn't - because he's getting too much money and attention spreading disinformation without fact-checking or evidence-based science ;)

To his credit, however, Joe took Neil Young very seriously, being that he is a fan, and gave an apology for not having more scientific experts on his podcast, and vowed to do better, as well as put a voiceover advisory to his show.

And all of this, he should've done before now, when God only knows how many we've lost as a result of his disinformation.

As for Neil Young and Joni Mitchell - as always, I applaud you and what you were trying to do,  and thank you for all you have done - but unfortunately, "an ambulance can only go so fast" ;)

You would think 50 years was enough time, but history teaches us it takes much longer, unfortunately, and humans are still humans and political, greedy creatures nonetheless.