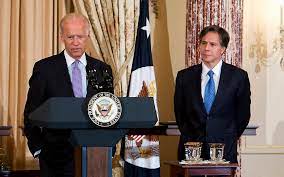 Too many are overlooking how significant and positive these changes actually are.

First, the obvious - no propaganda "intel" to push us towards war, this time, like the infamous "bayonetted babies in incubators"  for Desert Storm.

Secondly, did you notice that President Biden and Secretary of State, Anthony Blinken, made public/gave us updated intel statements,  every step of the way, before this even began?

We knew where Russian troops were camped, how many there were, what weapons they had, what they were planning and where, and the timeframe of when.- and they were accurate.

Nothing was secret, nothing was hidden - we knew what to expect.

It wasn't the usual bunch of men, sitting in the situation room, talking amongst themselves about the intel, then releasing a very vague, cryptic, vague blanket intel statement.

When they knew, we knew - not the full details of course, but the big picture  - and most importantly, the intel was accurate -  not over-dramatized or over-inflated with propaganda.

In fact, that's the one thing I couldn't help but smile at - Putin loves the element of surprise, to create chaos - but he couldn't, because Blinken and Biden kept publicly announcing everything in advance, everyone knew what to expect - they totally stole his thunder! LOL!

I could envision Putin just throwing a temper tantrum and cussing in Russian every time lol.

Regardless, back to our policy changes and kudos for Biden and Blinken, I gotta say, I was also impressed with Biden's press conference the day of.   He was assertive, but still polite with press.

Conservative warmongering outlets kept asking him why not send troops directly to the Ukraine.

The answer is a no-brainer, which Biden explained and handled with aplomb, but didn't continue to repeat himself when some press wasted time by asking the same question.

Someone else asked him if he "still thought Putin was a worthy adversary?"

He said, "Yes, but remember I did say adversary, and that's the important part of that statement."

Someone else asked, "Do you think you underestimated Putin, after 2014's invasion of Crimea?"

There's a lot of things he could've said here, pointing fingers of political blame, but instead, he took responsibility for all three administrations since as a whole, as a team - by saying "We."

The only thing I felt he didn't handle well was the repeated question on why not sanction Putin personally, which he said was "on the table."

I wasn't really sure what was meant by this question - his personal assets or ability to communicate via press with the west or-?

Well, since that time, of course, Putin has been personally sanctioned - and the reason it was on the table is that he needed time to get our allies all on  board to do so - if just the U.S. had done it, it would've been futile - but you can't say that in a press conference before everyone agrees, or in effort to pressure other countries to agree, you just can't (although Japan is still waffling).

Though President Biden has done a couple of things I'm not happy with,  I'm overall very happy with him - and I'm very proud of his handling of this, I think he's done a remarkable job.

And for UK-ers reading, I also watched Boris Johnson speak and answer questions before the House of Commons on the day of, on BBC-America.

I have to say, though I've not been a big fan of Boris Johnson, I was pleasantly surprised and very impressed with his plan and how he handled questions.

Someone asked him if he "was going to implement a review panel on every Russian entrant into the UK?"

Boris said something like: "We will be monitoring things closely, but I want to clearly state that just because a person is Russian, it doesn't make them a bad person."

Someone else used the time, and world attention, to pre-empt their question - which wasn't really a question - by saying "the time for pretending and partying is over, even parties by government themselves, isn't it?"

Low blow -  inappropriate, political jab at Boris Johnson for partying during lockdown.  Okay, we all already know about that -  not the time - bigger fish to fry, right now -  let's move on and focus.

Boris just shook his head, a collective groan was heard around the house, and Boris essentially reassured that they could be assured that no one was partying now lol.

I'm also encouraged by the amount of on-board unity we've got going on - gives me hope that out of this chaos may grow more common-ground and unity?

Okay, we won't get carried away with ourselves LOL