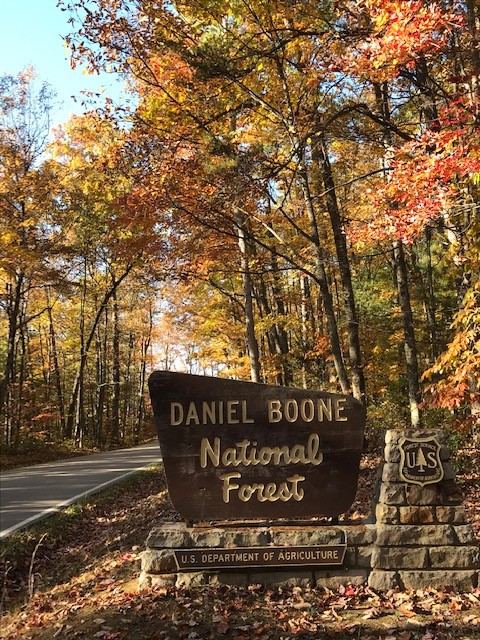 The fall foliage is very late in Kentucky, this year, and may not completely come at all, considering that even though there's been plenty of rain, it was also too warm for too long, and then suddenly dropped down to freezing temperatures this past week, causing many leaves to simply die and drop off, rather than change color first.

Nevertheless, we took some mini-hikes at Red River Gorge in the National Forest, to Chimney Top Rock and Princess Arch :)

The Red River Gorge is a protected geological area in the Daniel Boone Natural forest, in the foothills of the Appalachian Mountains in Central-Eastern Kentucky, in the Slade, Stanton, and Campton areas of Kentucky.

It was formed over time by the Red River eroding through the landscape, over centuries.

Though the huge Natural Bridge is the big attraction there, we had visited there on our last hike, so I decided to show Mark two new areas to him - because if the foliage is on fire anywhere in Kentucky, it'd be at the gorge, and Chimney Top Rock would be the best vantage point.

In fact, there are only three areas in Kentucky I've introduced my husband too that I know he'd love and this is one of them - Red River Gorge, Shaker Village, and Mammoth Cave :)

Mark asked me what the difference was between a gorge and canyon?

Well, not much - I think just two differences, actually?

They're pretty similar, both usually carved out from both water and wind, over centuries -  but technically,  gorges always have a river, canyons sometimes do not.

Also, I think gorges tend to have more green/has more vegetation, whereas a canyon has little vegetation, if any at all.

Mostly, despite the technical differences, I think people named things a long time ago regardless, and it's just what people called it regionally - a gorge in the east and a canyon in the west?

Back to our hike, even at Chimney-Top Rock, the fall foliage wasn't up to par, but still on display in a few spots along the trail, and still a lovely view :)

(Sorry about the pic quality, these are from my iPhone 7 - our camera went kaput on our vacay in June :/) 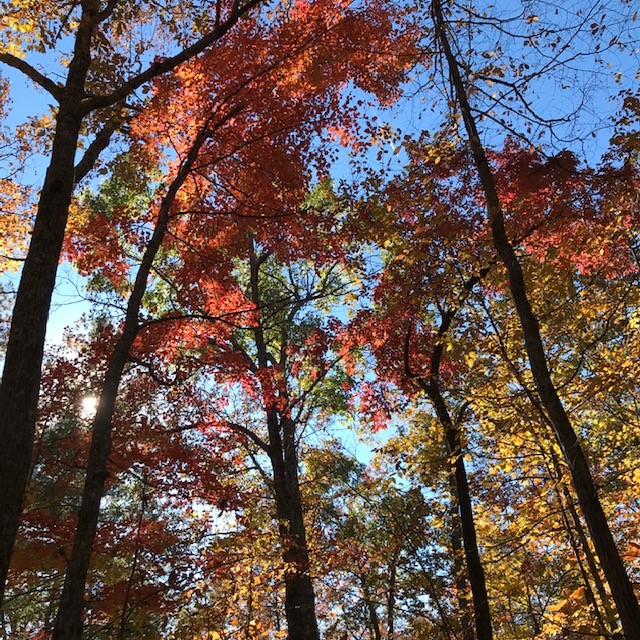 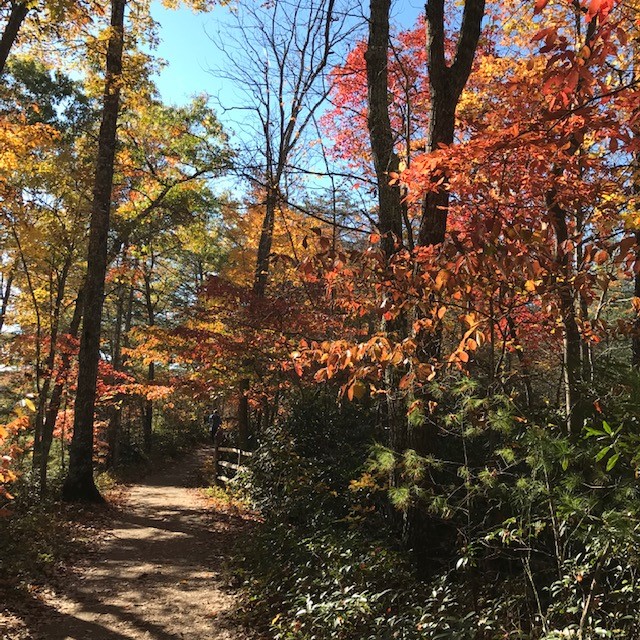 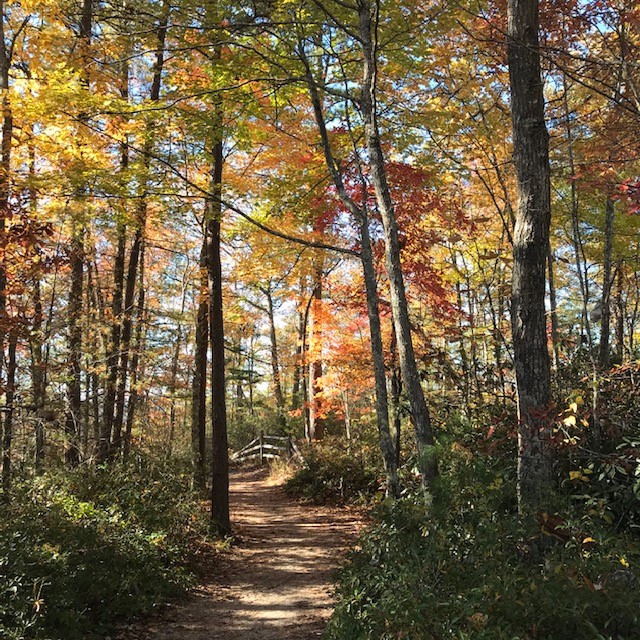 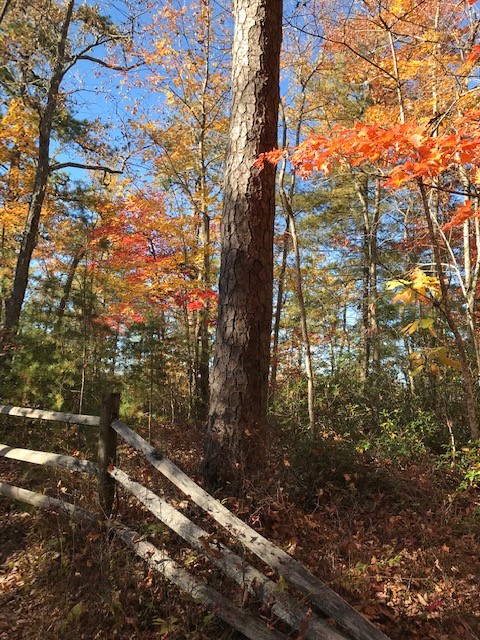 From atop Chimney Top Rock ... 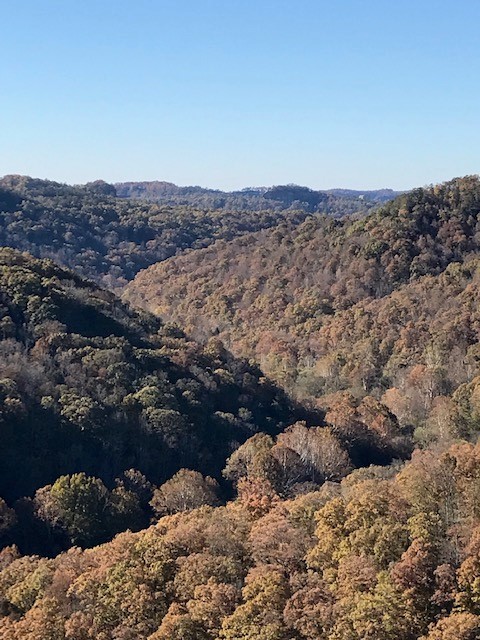 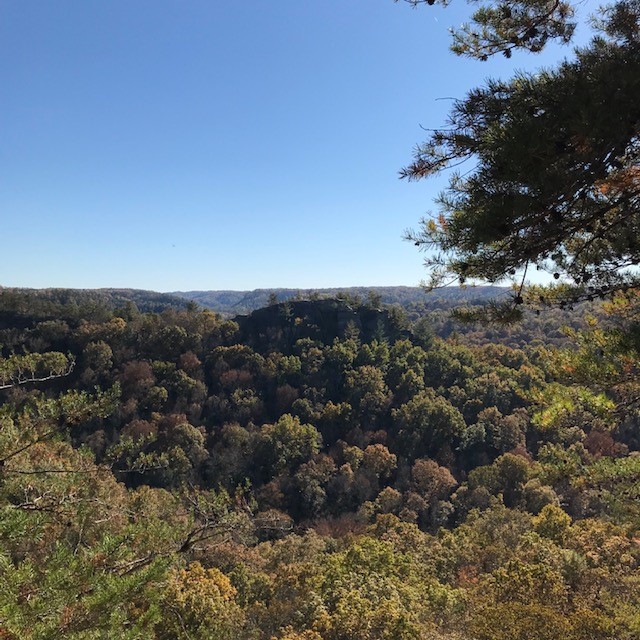 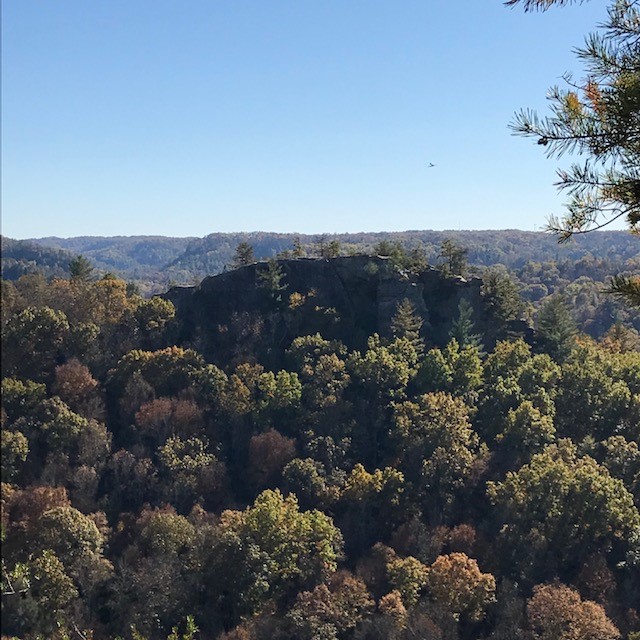 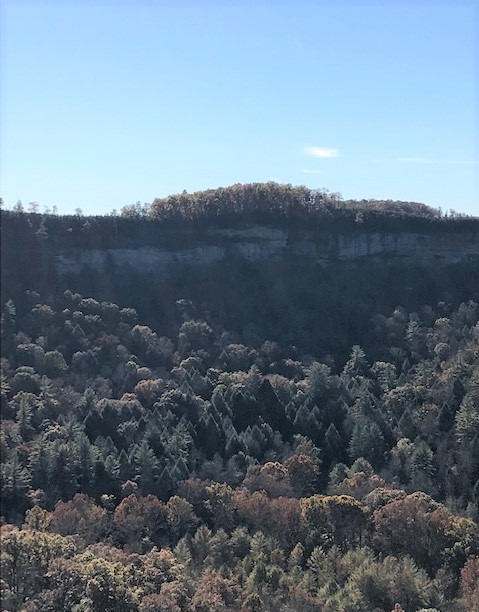 In this pic, you can see the gorge creator, the Red River, at the bottom of the gorge, still twisting it's way through the terrain  ... 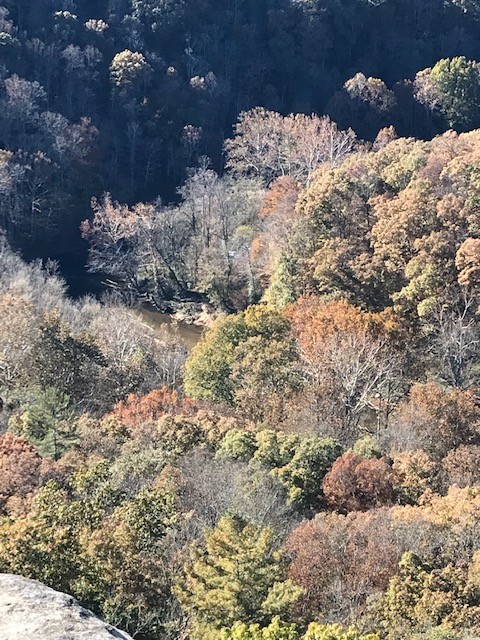 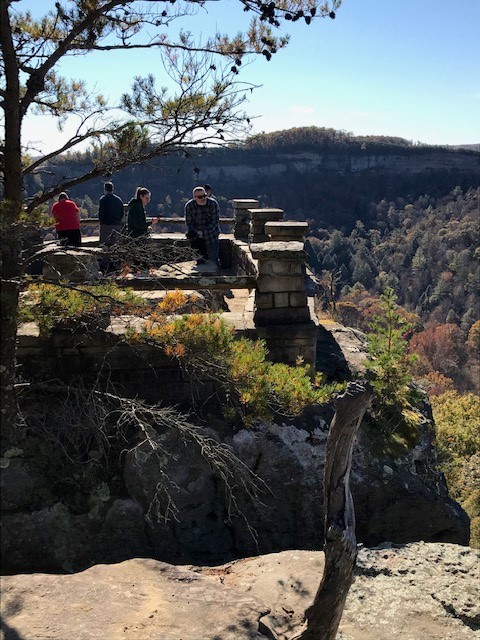 Now, just a little story ... a cautionary tale ...
So you see how there's fencing around the rocks, a wooden bridge between the two rock cliffs, and a grassy area about 200 feet down? 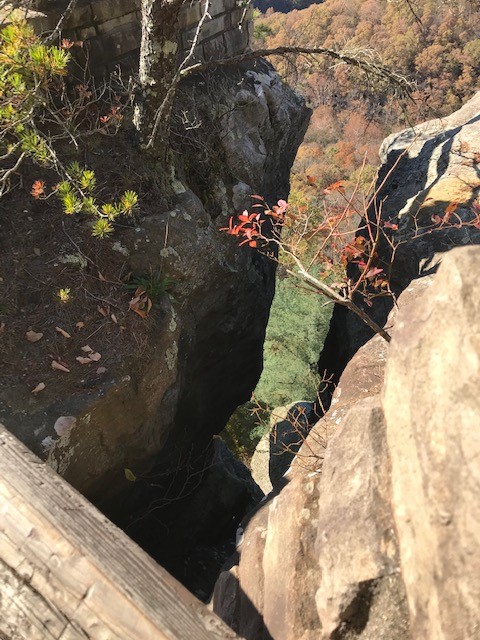 So the thing to do to prove your bravery, agility, and sense of adventure was try to jump from the higher one to the lower one and back again (the harder part) without a harness.

So 28 years ago, I went camping, hiking, and rock-climbing with some friends, and had a bit too much to drink - which of course lessens inhibitions and anxiety.

Now, let me just pre-empt this cautionary tale by saying that even though I have not been blessed with many gifts - particularly any athletic ability whatsoever (unless you count archery) - for some reason, I was a natural rock-climber.

In fact, climbing was one of very few activities that came naturally to me and that I felt confident doing (perhaps overly so); in fact, still do, to this day, though it would take some conditioning now to get back there.

As a child, despite fear of heights, I nevertheless climbed trees like a monkey - climbing up was never a problem, just climbing down - which is why to this day I prefer rock-climbing, not repelling ;)

In fact, my mother used to tell the story that at age 18 months, she  once came in to check my crib to see if I was asleep, but I wasn't in it - so she panicked, at first thinking I'd been kidnapped.

However, she found me curled up and asleep in the top shelf of the closet lol.

She scratched her head - because I'd somehow managed to climb my way out of my crib, over the chest of drawers, and hoisted myself up into the top shelf of my closet, at 18 months of age lol.

(Never mind why I must've felt safer from my family sleeping in the top shelf of my closet - much like humans used to sleep in trees to avoid fork-tongued, venomous snakes in the grass? lol ;)

Regardless, back to my young-adult cautionary tale, for some stupid reason that I would have never done sober, with my anxiety issues and fear of heights  - I chose to take the legendary dare - and jump from one rock to the next and back again - with again, the jump to the higher rock back being the most difficult.

However, being slightly intoxicated -  I slipped on the jump back - nearly falling to my death, like so many who had done so before me (in fact, there's a few memorial plaques there now).

In fact, had my male friend not insisted he hold my hands for stabilization on the jump back -  and thus helped pull me up after slipping - then I, too, would've been another Chimney-Top Rock casualty :/

Ah, the stupidity and ignorance of consequences of youth, and the lessened anxiety/inhibitions/non-filtered effects (which are there for a reason) of alcohol, eh?

Now, I won't even get near the edge ... but super glad they've put the bridge and fencing here.

There are still people who climb past the fencing and try to do it - still at least 1 death a year there - but at least it's not the previous 4 to 7 per year.

Let that personal story from 28 years ago be a lesson to you - drinking alcohol and hiking/rock-climbing do NOT mix.

We next went to the small arch bridge we camped under on that trip - Princess Arch. 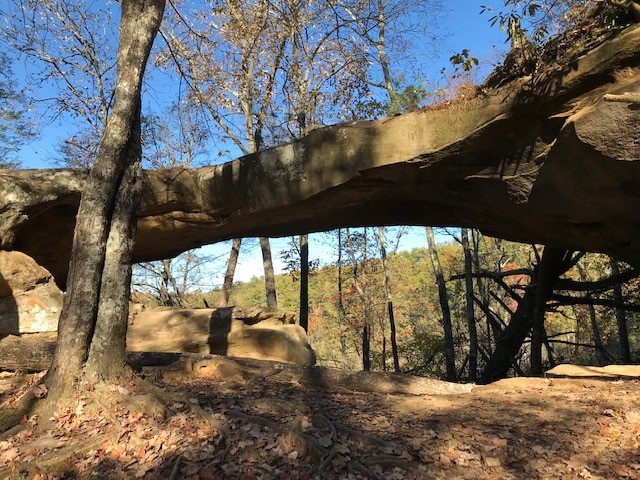 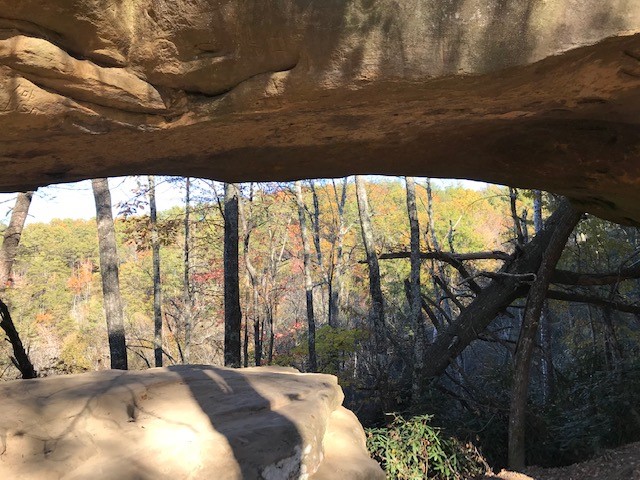 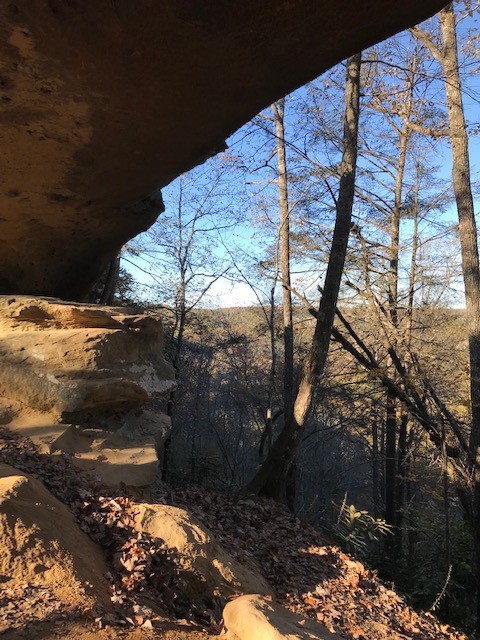 Some things had changed/shifted much since then, but this hadn't - except that I don't think you can camp there anymore, it's now an official park trail.
Just some other sights along the way - great day! 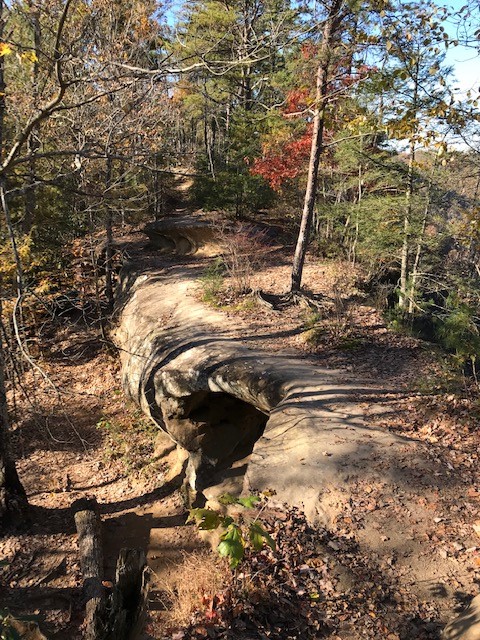 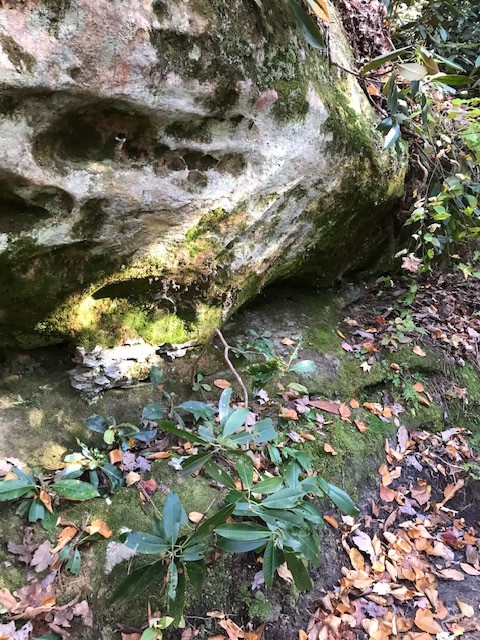 Some residual wild blueberries, untouched by man, bear, or birds ... 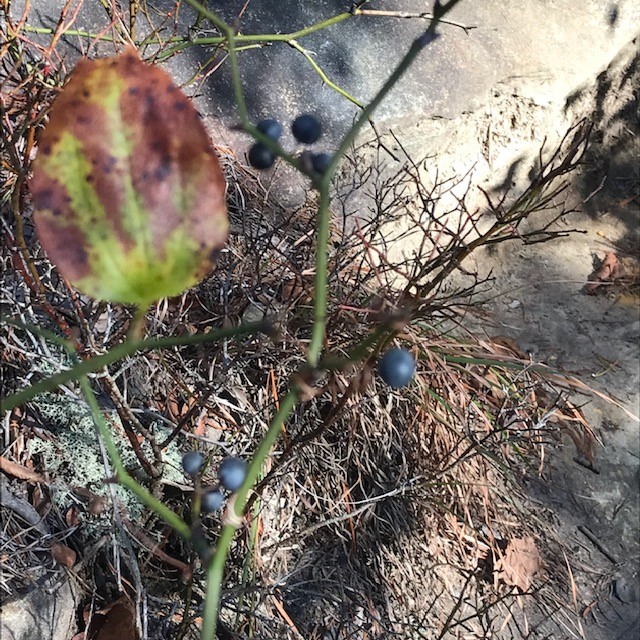 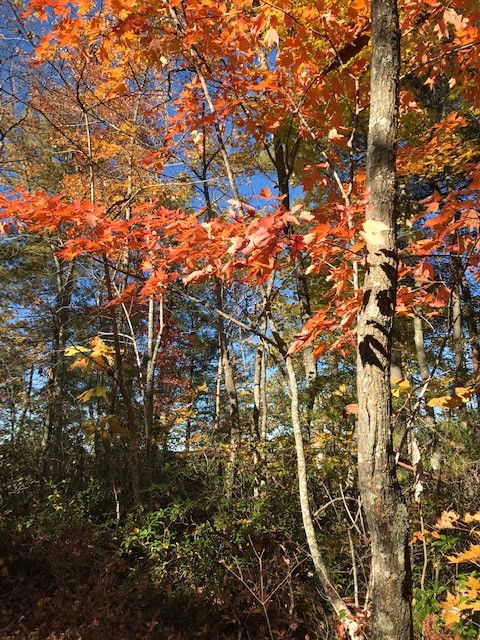 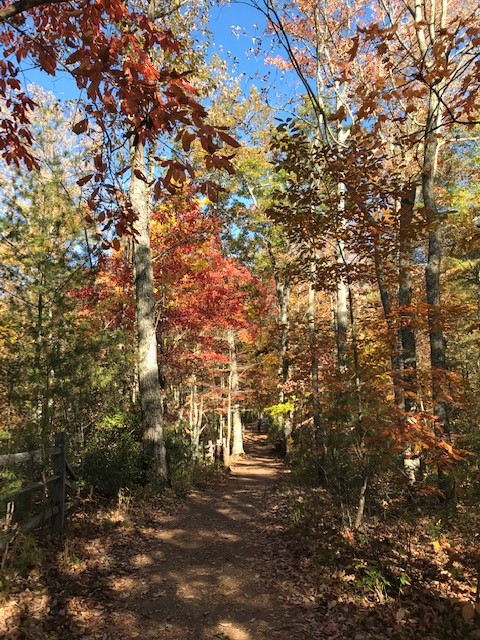 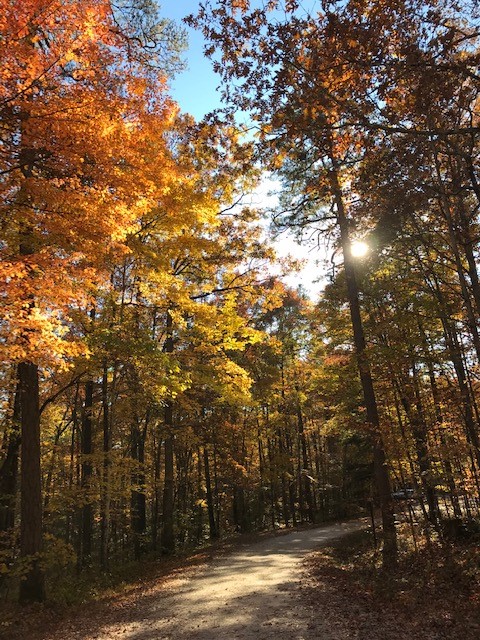 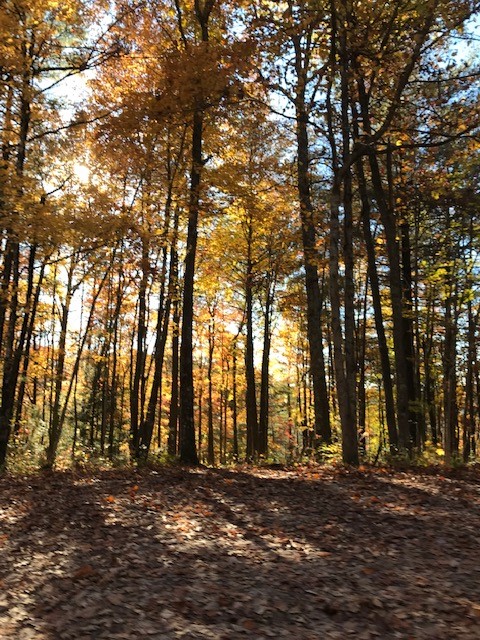