All The Light We Cannot See ... 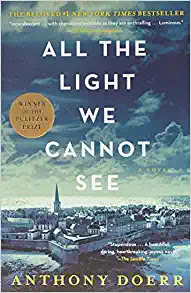 Just now finishing this Pulitzer-Prize-winning book, and without giving the entire plot away, I can say that it certainly earned the Pulitzer - and I'm hoping the forthcoming Netflix adaptation into a movie version lives up to the quality of the novel.

Keep in mind, it's written in the current popular back-and-forth-through-time style, which some people struggle with - try to focus anyway, Twitter people with the attention span of gnats - it's worth it :)

Also keep in mind, though Doerr can and does write in very descriptive, detailed sentences, especially about scientific principles, he very often also writes as our brains think - like musical notes, in a rhythm - and sometimes in short, staccato notes, particularly when a character feels threatened, or in one or two-word phrases, as well as advice spoken to us by others, long ago, that stuck with us, for better or worse.

I'll try not to give too many spoilers, but as for the title, it has several meanings.

It not only refers to the progressive blindness of the the French girl in occupied Saint-Malo, France, as well as the obvious symbolism of finding hope as light during darkness, of course - but also to the light and color our brains create in our imagination, even in total darkness.

Most importantly, we know that colors are actually forms of light and heat which exist along a very broad spectrum, and that actually, the human eye cannot see the entire spectrum, even in the most well-sighted individuals (thus why we have infrared binoculars, etc.)

This of course has a deeper philosophical meaning in the book,  rather than just scientific - referring to the fact that people are often more complex than we make them, we often cannot see them in their full spectrum of light and dark, we just see snapshots along their spectrum, especially when we use social media as a gauge of who they are, but often even in real life.

Humans rarely come with neat little black-and-white labels, though we try to make them fit into these boxes (and despite attempts to self-identify into these boxes -  meaning black and white not only in terms of skin, eye, and/or hair color, but who we think they are/ appear to be to our own subjective imaginations as opposed to reality.

As for the plot, it follows two seemingly very different young people from childhood, on opposite sides of a war, who's lives become briefly intertwined, who have much more in common than we think.

The first main protagonist is Marie-Laure LeBlanc   - a highly intelligent young Parisian blind girl, who "escaped" with her father to his brother's home in Saint Malo, after Nazi bomb raid during WWII, only to find themselves later in occupied Nazi territory.  Her father was a brilliant locksmith and puzzle master for a Parisian museum that houses rare precious gems, and carries a stone, which they are unsure is the original blue diamond or a decoy fake, which one particularly nasty Nazi-gone-rogue is obsessed with trying to locate.

The second protagonist is Werner Pfenning, a young German orphan, raised in an orphanage with his sister, who despite being highly intelligent, will never be properly educated, and has no choice but to become a coal miner and dying young like his father, despite his intelligence - until - the Nazi regime comes along, and he fixes a radio for a prominent Nazi colonel that no one else could fix, and he is sent off to Nazi youth school to become properly educated - and ends up becoming the top radio-transmitting investigator for the Nazis.

He doesn't fully buy into the Nazi mentality, especially at first -  he thinks it's absurd and monstrous, unjustifiably cruel and merciless, even to those within their own German ranks and race, to those deemed "weak"  or who don't fully adhere/aren't best representative of the Aryan race.

However, he plays along, knowing it's his only chance at a way out of his current life, so that he can provide for his little sister and the only mother he has known, Frau Elena, the French nun who runs the orphanage.

*That's not an excuse for Werner becoming a Nazi, but it was survival reality for at least some smaller percentage of Nazi soldiers.

And in fact, the longer he's a Nazi, the more he tries to convince himself of the ideology to justify his actions and ease his conscience.

Imagine you were an 8-year-old orphan who likely would never receive a formal education, and you found a broken radio that you figured out how to fix and listened to international broadcasts, particularly being inspired by a particular French scientific broadcast that taught you everything you needed to know about electricity, about how electromagnetic waves, sound waves and radio waves travel, and your imagination of how the flow of energy from one place to another works is the reason you can not only fix radios so well, but can calculate and triangulate where enemy radio transmissions are coming from so well.

What would you do if you, as a pretending-Nazi-for-survival  - not that you would be, but let's say you were -  discover that your latest radio transmission investigation of a French resistance transmission of German artillery coordinates is actually coming from the same French transmitter you heard as an uneducated orphan child, who taught you everything you needed to know about radio waves and science?

Would you sell them out and turn them over to be murdered?

Would you lie, commit treason, and protect them, knowing certain torture and death await you, if found out?

I guess it would depend on how bought into the Nazi ideology you are, or you had become.

Also, for all of you currently living as though you are in some sort of wartime or post-apocalyptic society as a result of your own overactive imaginations, as if it's about just your own survival and that of your family in an "us versus them" mentality, against some threat which may or may not really exist except along the spectrum of light and darkness that exists solely in your own mind ...

... might I suggest reading this book (or wait for the Netflix version) = so you can find out what true survival-living is really like versus choosing to live like that now, though it's not warranted  ;)