As I Predicted, No Suspension, Just a Small Personal Fine; However, Aaron's Team - Whom He Supposedly Misled/Lied to - Was Fined 20x His Amount :/

As I predicted below, a few days ago, Aaron Rodgers was not suspended - he just received a small fine of $14,000 for misleading /lying to his team, opposing teams, his union, the NFL, and the American public.

The Green Bay Packers -  Aaron's team, whom he lied to/misled, mind you - was fined $300,000  for Aaron's behavior - which is 20x as much as Aaron himself had to pay as consequence.

That's not a consequence for bad behavior from a spoiled brat  - it's a reward :/

I don't understand why the NFL made his team - whom he supposedly lied to - pay 20x as much as Aaron himself - UNLESS - they proved the team owners did know and lied about it, too?

Regardless, just 5 years ago, Colin Kaepernick took a stand and protested, too.

Only his protest wasn't selfish and he lied to no one.

His protest was against exactly this kind of double-standard justice and inequity based on race - and he didn't lie to his team, other teams, his union, the NFL, or the American people - all he did was kneel for the flag rather than stand up :/

As a consequence, he was never signed to another NFL team again, his football career was ruined - game over.

At that time, Rodgers openly supported Kaepernick, social injustice, and antiracism - but considering he just inaccurately attacked the "woke mob" in a way that didn't even make sense, conflating the social justice issue with the vaccine issue, I think we can safely say he's done a 180 since (see my new post for my theory on that).

Regardless, whether he realizes this or not, his power abuse just proved Colin Kaepernick's point - which is not only that double-standard justice based on race/politics is still  very much alive and well -  but that our society has now gone past simply making excuses for bad behavior from white men, straight into actually rewarding them for it, since Trump :/

Dear God,
Once again, just like with Trump, please help me to not literally loathe this man, for becoming the latest poster child for whiny, falsely-entitled, white-male privilege and power abuse, as well as double-standard justice for white males versus others? lol.
I'm sure I'll get over it, but at the moment, I'm fighting hard against negativity, because I'm pretty upset/angry about this sort of white-male power abuse BS still going on in 2021, recognizing the all-too-familiar feeling of powerlessness with injustice - nothing we nobodys can do about it - and when you protest, it just makes it worse :/

So I just pray for your blessings upon people of color - I don't know how they deal with so much injustice, inequity, and chronic powerlessness, so well, for the most part - I guess because if they don't, then people say it's "in their nature"  rather than the frustration-straw that broke the camel's back :/

I've had my fair share of powerlessness in my life, of course, but it pales in comparison.

As you know, I'm not very vindictive or revenge-minded - I just walk away.   In fact, I've walked away from injustice without a word, more times than I can count, letting go and letting you.

And yet I wonder how many times anyone can keep doing that - how do they do that?

And yet most of people of color do, they have to - they continue to rise up, rise above it, and still manage to find their joy :)

Help me to learn from them how to better deal with powerlessness?

And again, I pray for your blessings upon them for doing so - that their reward in heaven will be great - because your son promised that unlike here, in the Kingdom of Heaven, the first shall be last, and the last shall be first :)

As I said, and you know, I'm not vindictive - but as you also know, I AM a fan of justice - in fact,  I get more riled with injustice against others than I do for myself lol.

So would you tolerate a more petty human-natured request on this one?

Only this next request isn't really to you - it's to the defensive linemen for the Seattle Seahawks this Sunday (or whatever  opposing team plays  when Aaron returns) lol.

Not a career-ending injury, mind you, Gentlemen Avengers - just rendering him a consequence everyone lets him escape, while showing him the mercy. (He will still play the victim regardless, as we know.)

Also, Gentlemen Avengers -  do NOT get a targeting penalty - especially if you're a person of color - because you know you won't just receive a tiny fine in comparison to your salary, like Aaron did - you'll get fired or suspended,  and never signed in the NFL again :/)

PS - We are now told that the small fine wasn't even because he lied/misled his team, but because he defied COVID restrictions by going to a Halloween Party.

I'm not alone - this meme is now being shared on Twitter ... 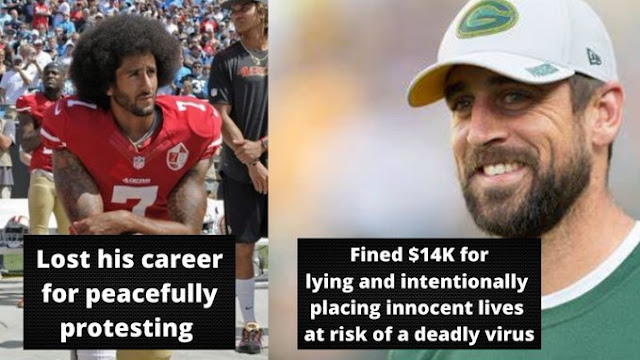