Why Are We Focused Only On Removing Just the Congressional Women?

So though I don't have a subscription anymore to WaPo, this opinion piece about McConnell being "on the right side of history" popped up in my news feed, after his comments made about Marjorie Taylor Greene being "loony" and a "cancer" on the Republican party - and I commented for the first time in a year (last time after the Kobe controversy) - see below.

Though I agree with McConnell about Marjorie Taylor Greene, she did not start this mess, nor did she do it alone, nor is she the worst, nor does she even carry primary responsibility for spreading dysinformation - but she sure as heck is the first one to be publicly called "loony" and targeted as a "cancer" on the Republican Party, isn't she?

IMO, she's actually more of a symptom of the disease - or more accurately, she's a metastasis off the primary cancer.

Clearly, McConnell (and everyone else) is afraid to call Trump what he is, the primary cancer.

What, both political sides thought it would be easier to go after/remove the women???

Then some right-wing nut job troll -  who admitted he's on there for 8 hours a day (being paid?) - came after just me, of course, despite at least 20 people commenting at the same time lol.

However, I figured the commenter who jumped in, "Blue Steele," handled him better than I ever could, and I left lol.

(Plus though I'm still trying to listen to the other side, if they're being reasonable and are capable of reciprocating by listening to what I have to say in return, I'm also trying to keep my New Year's resolution not to engage and/or argue with angry, irrational, crazy people lol. )

PS - I did edit these for typos before I made screen shots.  Oops, it seems I missed one, but not going back lol. 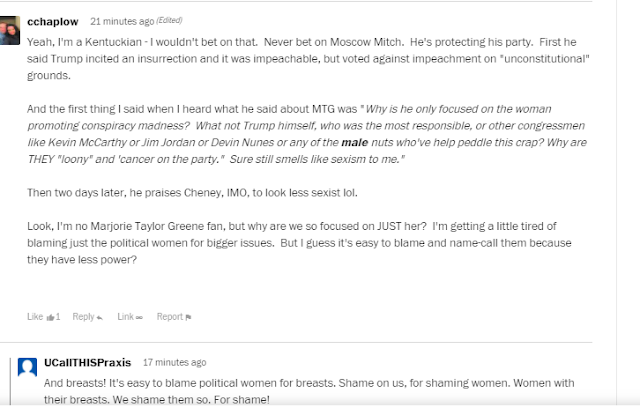 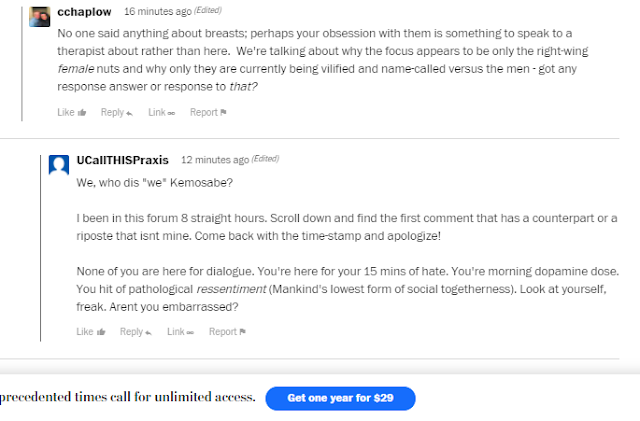 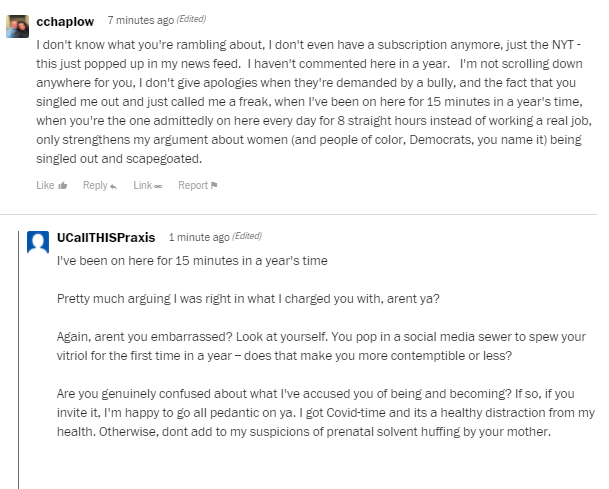 PPS -  When I originally wrote this post, I included McConnell's defense of Liz Cheney, but removed it because it was already in the comments.

However, I do think it's worth it's own separate mention, because although Liz was not the only Republican congressperson to vote for Trump impeachment, she was the only GOP woman that GOP congress tried - and failed - to depose yesterday.

I'm sorry, but I do think this is about gender, on both sides - and I can't believe we're allowing it.

Are Marjorie Taylor Greene and Liz Cheney really the worst baddies in this whole mess?

I think people on both sides think it easier to have a woman removed than men, despite the fact that there have been more vocal (and dangerous) men in high political positions.

Also, they were both recently voted for by their constituents - it's not like their constituents didn't know what they stood for, when they voted for either of them - so to remove either will stoke cries of "anti-democracy," at this point, despite perhaps removal being warranted due to MTG's posts about "executing Democrats."
That may be what MTG wants, to play the victim of the government.
So let them stay on these committees and it will soon be revealed how much they do or do not know, on these subjects.
And isn't that the purpose of a committee, so that no one member has power?
One vote versus the rest of the team won't hold a whole lot of weight, and I doubt will make much difference.
In Marjorie's case, she'll likely make a fool of herself with her lack of factual information and be voted against repeatedly anyway lol.