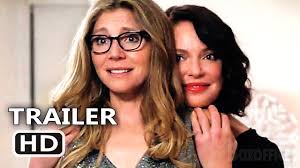 In that not only does Kate never have Tully's confidence to "sell it," but when she does things like ... nervously says something awkward or ambiguous while leaving a voicemail/sends an email or text that autocorrects to the wrong thing or is ambiguous, then calls/writes back to clarify, but only ends up making it worse by overexplaining?

I've overwhelmed quite a few people before, with that.  Sigh, anxiety - always a party.

Except to my credit, though I have blurted some nervous nonsense before, I can't say that I have ever ended a voicemail by inexplicably blurting "stay moist"  to anyone - particularly the guy I just started dating after my divorce! lol.

I'm not sure why she said that, and clearly, neither did Kate, banging her head on the desk for saying it lol.

The thing is, I feel sorry for other people, when they say/do stuff like this, and I'm kind to them about it, try to act like they didn't or make them feel better.

However, when it's me, I just keep banging my head against my desk for like, hours or days, saying "You idiot! Why did you say that?  What does that even mean?!?" and then hide under my bed and vow never to leave my house or talk to anyone ever again lol

(Okay, I don't really hide under my bed later, but I will beat myself up for it for hours to days, depending on how kooky it was or who it was lol.)

Oh well, I'm not going to say what prompted this blurb, because I'm embarrassed enough, but it makes me feel better to know that apparently there are enough other people in the world like this that they created a Netflix character out of her.  Okay, I only feel slightly better.  That is all lol.