As I admitted in this post, I wasn't very nice, when writing a letter to Mitch McConnell about his originally saying Trump incited a riot and it was grounds for impeachment, then doing a 180 to protect his party.

As I said, I'm usually a lot more diplomatic when I write these types of things, but I am so done with this a-hole lol.

So his office just wrote me this response ... 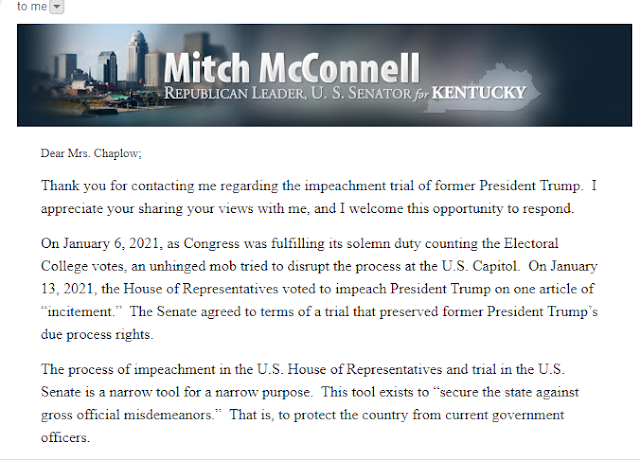 And I replied as follows:

Nonsense - the constitution only says "current" president for removal -  it does not specify current or past president on disqualification, and you know it.  Therefore, you are taking a very "liberal" approach to the language of the constitution to benefit your party.

While I appreciate your recent sentiments on Trump, they were too little too late.  You had every opportunity to help curb and stop this before now, and when it came down to hindering his ability to ever hold office again, you cowarded out - and in doing so, you help put the nails in your own party's coffin.  It will take some time, but yes - history will show you as a weak, pandering, cowardly enabler of neofacism.

Hehehe - just, ya know, keeping it real, so that the over-privileged swamp turtle knows that not everyone in Kentucky is part of the brainwashed Trump cult.

And I love how he patronizes us, presuming we don't know the constitution and are all uneducated or under-educated, gullible idiots in Kentucky.

Well, thank God that in America, we still can express this kind of - erm - dissent - amen? lol

PS -  I was just asked why McConnell seems to make me angrier than Trump?

It's a trick my Jewish friends taught me, growing up - because when we start to hate those who inflicted pain on us, we catch their hate and fear disease, and they win - and we become no better than they are.

I find that articulating any anger, using my words, helps me actually avoid hatred - because I'm being honest about what I feel, rather than pretending and letting resentment fester.

So I speak or write it out and then let it go, I've said my piece (as long as I'm allowed to), out into the universe, and then I'm done.

So we're just talking about frustration and anger levels, here, after years of this BS.

Secondly, I guess I can explain it best this way ...

Both get my blood boiling, for sure.

However, Trump is like a large, emotionally arrested-in-development child who legitimately doesn't know (and doesn't care) about the difference between good and evil or right and wrong.  "Evil" to him is anything that doesn't support or glorify him.

McConnell, on the other hand, knows very well the difference between good and evil/right and wrong, and will openly choose evil if it benefits him and his party.

In other words, Trump genuinely doesn’t know where that moral line is (and doesn’t care); McConnell sees that moral line, but crosses it anyway, as long as he believes he and his party will personally benefit ;)