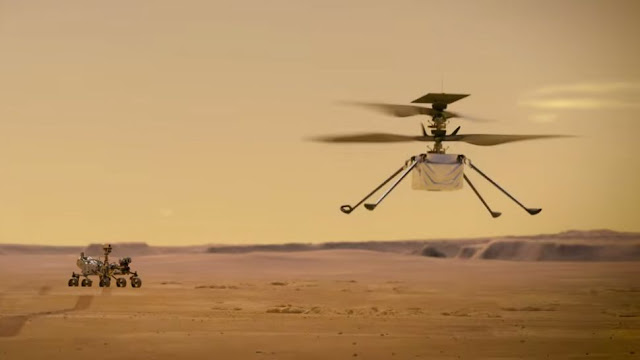 I have mixed feelings about our tax money going to space exploration.

On one hand, this is some pretty cool, cutting edge science and technology, that we now have a sidekick helicopter companion to the Mars Rover "Perseverance," called the "Ingenuity," that may fly up from the surface of Mars.

We learn more about mathematics, chemistry, physics, and even biology, past ways we only think we already understand, plus we glean new information about possible new resources, as well as valuable environmental and climate information.

And yet still, can I just say, that helicopter reminds me of something Leonardo Da Vinci drew 500 years ago? lol
(Meaning I'm surprised we're not further along than we actually are, by now ;)

But on the other hand, I'm reminded again of the poem "Whitey on the Moon" (about the billions being spent on this stuff, instead of going towards domestic issues, which I wrote a post about here)? lol.

I don't know, part of me wants us to focus more on getting our own sh*t together first, but I also would like more information to help further science.

Also, I'm not sure why this popped in my head - but an absurd "what if" scenario that I found hilarious? lol

The first part isn't so original - the "what if"  there were beings on Mars, who now all lived underground, because Mars' water was now all underground, and saw us landing with this stuff and trying to fly helicopters off the ground of their planet.

But what if they, too, also had YouTube videos and Twitter,  speculating the same ignorant, paranoid, crazy stuff that we do, about anything or anyone new and different, assuming the worst, like ...

"Well, whatever it's doing, it's not doing it for us - damn 'ferners," stealing our rocks 'n shit, without  compensating us."

"Mark my words, it's going to take over and kill us all or make us all its economic slaves!"

"Nobody will be claiming territory and making economic slaves but US, B'God! WE get to determine who's inferior!"