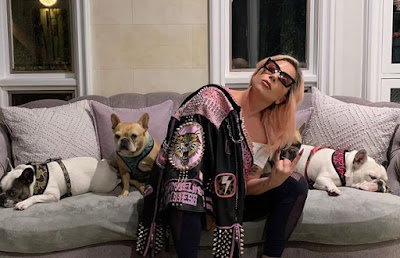 Apparently, her dog walker was shot - you heard me right, shot - and two of her three French bulldogs were stolen (the third ran away and was found later).   She is offering a $500,000 reward for their return.

Okay, so maybe this story is exactly as it seems, and my suspicious antennae don't always go up on stories like this; but for some reason, they did on this one?

Not about Lady Gaga, but about the way this story is told.  I can't quite put my finger on it, but it's like there's something not quite right about this story, like it's not what it appears?

I mean, there are less dramatic, violent ways to steal high-profile-people's dogs - you'd have to know that with a higher ransom would also come extra-level investigation.

Plus risking that level of violence over a high-profile person's dog makes it seem either a more personal crime or overkill effort,  to increase credibility to the theft story?

I don't know.  Maybe it's just the way this story is preliminary being told without enough info yet.

And I'm not sure how critically the walker was wounded - and perhaps I need to know this first before I speculate and go down the wrong road, here (and if so, I'll feel horrible and apologize later for even thinking it) - but if I were Lady Gaga, the first thing I'd do is rule out the dog walker's possible involvement, as well as know more about the ballistics of the shot fired, before I just handed out $500,000, right?

Who knows, though, sometimes truth is stranger than fiction, things that sound unbelievable really did happen,  and so perhaps this really happened exactly that way - we live in a crazy world, after all.

Either way,  I hope the walker's injuries aren't critical.

And I hope the dogs are okay - and that Lady Gaga gets them back, I'd be beside myself :(

PS Updated, 2/27/2021 - The two dogs have been returned to Lady Gaga unharmed.  No other information than the woman who returned them was "uninvolved."  The dog walker, Ryan Fischer, continues to recover, but we still don't know much about the extent of his injuries.  Lady Gaga continues to publicly support the dog walker.  Strange stuff indeed.  I'm just glad the dogs are okay!