This Week's Streaming Awards Go To ...

(Edited and PS added after watching more of Bridgerton)

So with many nominations coming out - most notably the SAG awards, which now include streamed shows - I thought I'd write a little blurb of things that impressed me this week with some more - erm -unconventional types of awards.  Not overall, of course, just what I was impressed with for the week.

Also, of course, I haven't finished watching all of these shows yet, but here's the highlight of the streaming awards this week ...

I'm a little late to the Bridgerton party, considering I was confused by the premise.

I mean, I'm all about the idea of what it would've been like had slavery and race not been an issue anymore, by early 19th century British society.

However, I was confused as to why, if this was the case, it was still illegal for women to work, with mothers - having nothing else to do - being solely and desperately concerned with selling their daughters as wares/pushing them into marriage, parading/debuting them as if they were new dolls in a shop, and with men marrying them often for nothing more than substantial dowries and/or improved social status, as well as ability to provide male heirs.

Thus, I just started watching it today - and I'm left with the idea with that's precisely the point this series is trying to make - as long as we continue to condone this mess of a broken socioeconomic system of have and have-nots, the power-abusing and the powerless, even if race were not an issue anymore - there'd still be a gender inequality problem?

Okay, I get that  - and the storyline itself is actually Jane Austen-ish, so I'm game today :)

And, I mean, just look at him - the Mr. D'arcy-esque man himself - dressed like that - and with those soft, mysterious eyes - rawr :) 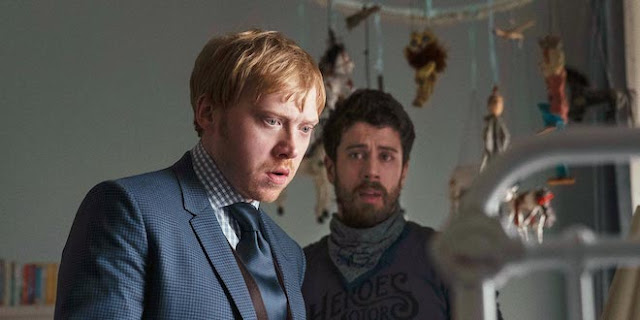 Rupert Grint - yes, that's right - Ron of Harry Potter fame, is as usual, the comic relief - but also does a surprisingly good job of  conveying absolute horror and pain, slowly spreading across his face, not to mention a fairly good Philadelphian-American accent (only a few slips and British inflections ;)

At first, he comes off as an arrogant, crass, snob with a drug habit, financed by his family's abundant finances - but you quickly learn that actually, he is perhaps the most normal member of this incredibly effed up family, and the most likeable.

This Apple TV series disturbs me greatly, and yet I can't stop watching it!

It's hard to explain without giving away the secrets that are slowly revealed, but essentially, it's an extremely dysfunctional family that chooses a nanny, who is, unbeknownst to them, trying to escape being raised by a creepy Christian cult.

As a result, you eventually find yourself asking - is there much of a difference?

Also you find yourself asking, who are the victims and who are villains?

Perhaps it's not that simple.  Perhaps they are all a little bit of both - as is true about all dysfunctional families.

Or perhaps in certain situations, when we at least perceive we are defending ourselves or our family, whether that is reality or not, we're all a little bit of both villain and victim.

Thus far, in this series that drops every Friday, it appears that Leanne is actually the closest to being the powerless victim, simply trying to escape a dysfunctional cult, but being chosen/choosing to get involved again with another delusional, equally dysfunctional (and dangerous?) family - thereby crediting the theory that dysfunctional roots lead to later dysfunctional choices, out of familiarity?

Creepy, twisty, and disturbing, for sure - with just a hint of possible supernatural occasionally making an appearance, that we don't understand yet.

Well, it is M. Night Shyamalan, after all.

He didn't write this one, just produced it - but there are plenty of Shyamalan-like twists throughout - just revealed all throughout the series, very slowly and subtly. 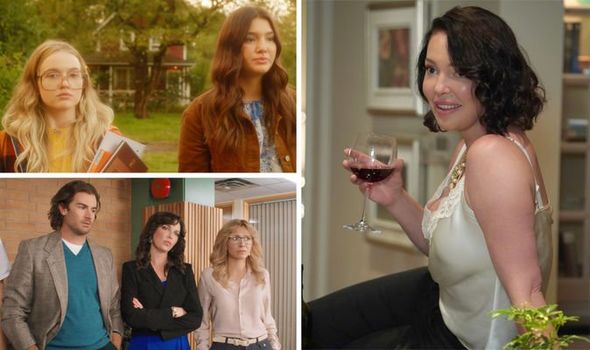 Both Katherine and Sarah Chalke do a phenomenal acting job in their roles, in what is an overall affecting, addictive story, but loses a bit due to the sloppy back-and-forth through time elements, which became difficult to follow at times.

Once upon a time, unfortunately, Kevin Smith labeled her as "difficult" long ago (actually, more her mother) which began her damnation to the Hollywood blacklist (despite the fact that he labels a lot of female actresses "difficult").

This was then solidified by the fact that she dared insult the reigning late-2000s weed-comedy gang that was Judd Apatow, Seth Rogan/James Franco et all, by pronouncing them meaning well, but still sexist, imagining themselves to be supporting women/feminism - long before Emma Watson had a brief role in "This Is the End" later, and said the same thing.   So ... was she wrong?

Oh, and let's not forget, both said so long before Hollywood women everywhere called out James Franco in the advent of "Me Too."

Also, she unfortunately withdrew her name from Emmy nomination for Grey's Anatomy, stating she did so because she didn't think she deserved it, that season, partially blaming the material she was given - which is, well, indefensible.

I think perhaps she meant it as more of a self-damnation than a critique of the show's writers, but she did include them - and to say so publicly ends careers.

Nevertheless, she has apologized (except to the Judd Apatow squad, but I'm not sure she needs to) and admitted she handled her anxiety about these issues poorly and sought therapy, and although still blacklisted by many, other strong, secure women love her bravery/forthrightness -  and thus, she is back in the limelight - as co-executive producer of this Netflix series, along with author, Kristin Hannah - and co-starring Sarah Chalke.

Many of  us women actually kinda like the eff-off/ballbuster types, when dealing with certain types of men -  and we hope she never loses it - Brava, Katherine Heigl :)

And don't get me wrong, I actually really like Seth Rogan (not so much James Franco, and I'm neutral on Judd Apatow) - but Katherine did have a point which took him too long to get - perhaps because he's overly focused on weed, believing it could solve all the world's problems?   If only things were that simple. 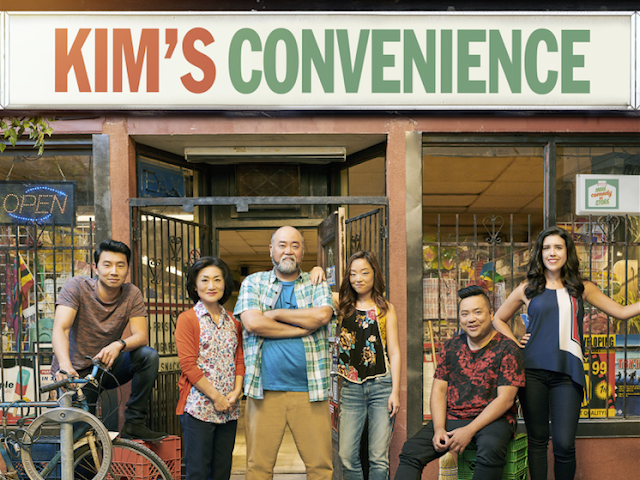 This multi-award-winning Canadian sitcom, which just began it's 5th season on CBC (which means it won't drop on Netflix later this year) - is a true, old-school sitcom, minus the canned audience laughter, with a different storyline each episode - with most of the hijinx involving one socially-awkward moment after another, with a cast of socially awkward characters.

However, do NOT make the mistake of presuming the social awkwardness is because they're Korean - the white, black, Indian, Muslim, and gay characters are all socially awkward characters, too.  And perhaps that's the point - that in the end, we're all a little socially awkward, especially in this day and age.

It's what you watch when you don't feel like delving into a story and just need a quick "WTF was that?" laugh :)

Also, it's responsible for Mark and me saying things like, "Are you praising The Jesus?," which we obtained from Mrs. Kim, who is very active in her church, and simply refuses to call Jesus, just Jesus - it's THE Jesus :)

That's all we had time for this week, folks - tune in next time.

I actually miss the days when we all watched something on network TV at the same time and talked about it the next day, don't you?

However, I guess we all get around to watching the same things eventually, at whatever time - I guess binge-watching an entire series in a weekend has the same result.  Mostly :)

PS - Okay, so after watching further, I get the premise of Bridgerton - the fictional story is loosely based on the fact that King George III's wife, Princess Charlotte of Mecklenburg-Strelitz, was of mixed race - a sort of "what if" scenario, in which Charlotte's status as King's consort (and later Queen) had resulted in permanently changing societal attitudes on race, to the degree that race no longer mattered at all.

It's a pity that in reality, this didn't happen, as a result - and also that Queen Charlotte's wisdom in ruling as regent in King George's absence (due to illness) also did not result in equally enlightened attitudes on gender as well as race :(

And unfortunately, over 200 years later, we still haven't evolved much ...