8 Kentuckians Arrested So Far, For Their Involvement in the Capitol Riot

Just in case some were still trying to blame Antifa, let me assure you - these are Kentuckians, and they are proudly pro-Trump, with Robert Bauer even stating "Trump told them to" in his speech - use any source you like to verify their identities.

Note: My list was directly obtained from local Kentucky-city newspapers and local Kentucky TV News websites - i.e. The Lexington Herald Leader, The Louisville Courier Journal, The Owensboro Messenger-Inquirer, as well as local TV news websites in these areas.  The pictures were also obtained from these sources, who'd often credited other news sources for the photos (such as Reuters for the photo of Michael Sparks in the Capitol building).

(In fact, as far as local and federal law enforcement are aware, there is no Antifa here in Kentucky - at most, some far-right groups.)

Isn't it terrible that all of these poor, innocent white men are being religiously persecuted by the federal government, just for being Christian, their right to 'peaceful' protest and exercising their first-amendment right to freedom of speech/expression?!?

Nope - more like consequence for breaking and entering a federal government building, theft or destruction of property, and assaulting police officers - on video (as most of them were stupid enough to post video of themselves doing so on social media). 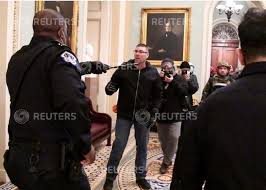 Michael was the first man to climb through the broken window and made the front page of Reuters. 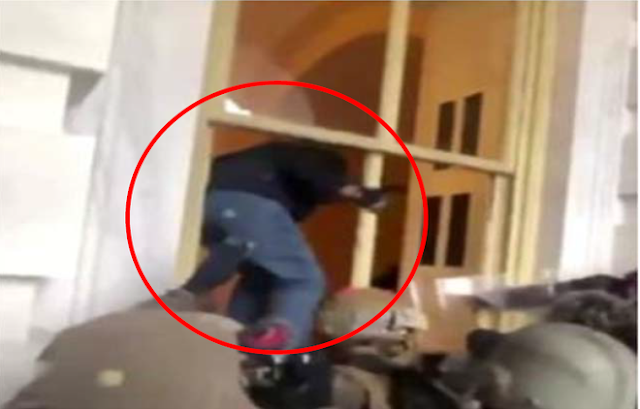 Gosh, we're so proud it was a Kentuckian - *sarcasm* again

Michael is charged with violent unlawful entry, disorderly conduct, destruction of government property, and obstructing law enforcement.
He asserted via his FB page, "Trump will be president for four more years, in Jesus name!"
Yikes - and "invoking" Christ's name for selfish political power/personal gain  makes you different from the same witchcraft that you charismatic evangelicals fear are behind everything, how, exactly? lol

In fact, invoking Christ's name - actually demanding Christ, rather than asking Christ -  for personal gain/political power makes your prayer (cough, cough, spell?) actually worse than witchcraft, IMO - and could even be possibly construed as blasphemy?

Also - erm - that is NOT how Christ instructed us to use his name, according to scripture.

Although Christ did say we could use his name to "cast out" legitimate negative spiritual energy, or in protection from it - he never said it was okay to invoke his name to obtain power for yourself or those you support.

Also, Christ never said to pray against (or use his name against) anyone -  against other human beings -  as that would negate free-will choice - only against negative or "demonic" spiritual energy.

However, many do, apparently confused by the difference between selfish human free-will choice VS. true negative spiritual energy.
However, the unfortunate truth is, most of this world's "evil" is driven by nothing other selfish human free-will choice, rather than true negative spiritual or "demonic" energy - proven by the fact that if you ask those people, they usually imagine they are doing the right and moral thing, rather than the selfish and evil thing, and justify it - Christian or not ;)

I understand the confusion, but to "pray" in this way, for personal power over other humans, isn't supported by scripture - and in fact, it's very similar to the spells used by those who practice witchcraft, including "binding" spells.

Yes, Christ did say whatever is bound on earth is bound in heaven, but the passage (Matthew 18) goes on to make clear he was referring to the spiritual bond created when two or three are gathered in his name for prayer, there he is in there midst.

And he did say you may ask and that the bond between three or more is a strong one and it may be granted - however - he said "may" - and I'm pretty sure he assumed we knew better than ask for a selfish request, considering most of his other sermons were warnings against selfishness, greed, and power abuse, so I'm fairly certain he did NOT mean to use his name to bring about your own selfish desires and power.

Most importantly, such Christian brothers and sisters conveniently forget that they don't have any special "force" power as humans  - it's God, the sovereign scientist, with the knowledge and power - and to God be the glory - not any human, politician or not.

Also, whenever any "supernatural force" power of God was used in the bible - whether destructive/obstructive or miraculous - note that it was never because anyone prayed against someone else (at most, the closest they came was praying for deliverance from someone).

It was because God determined on his own that his interventional power was required, and he simply instructed his people on how to prepare for its coming and what steps to take.
For example, sacrifices in the OT, Moses following the steps that God instructed for the plagues, people putting lamb's blood over the doorway to mark themselves for recognition by the spirit of God, King Naaman being told by Elisha to wash in the Jordan River to cure leprosy, as a pre-baptism before Christ, and in the NT, Christ typically asking for certain things before healing, etc. - except with the hemorrhaging woman, who on her knees, simply touched the hem of his garment in a combination of humility and faith that so impressed God, that Jesus felt the healing power go from him only afterwards).

Regardless, even in scripture, when God intervened with "supernatural force," you still had free-will choice whether to follow those steps for the coming event - that had no power of their own, mind you, they were only symbolic to represent  submission to God's love and will - or not.

In fact, there is little that separates most 'charismatic' evangelical Christians from witchcraft, despite each claiming the other is their spiritual enemy - they're actually more alike than they'd ever admit.

Both have turned to these forms of faith because they want power - they feel that they lack personal power, with traditional Christianity, and thus they want to obtain at least the illusion of more personal control and personal power over their lives.

Additionally, the language of their prayers of "invoking" and "rebuking" and "binding" is identical to the language used in witchcraft "spell" casting.

Though there are "gifts of the spirit," no one has been promised a "power" or "force" over other human beings, as again, that would negate free will, and it is God, not us, with the power anyway.
Additionally, neither God nor Christ ever promised us justice in this lifetime, just for us to seek it, and that regardless, it would most definitely rendered in the afterlife.

In fact, Christ himself died from lack of justice and said life would be rough for believers, and advised giving all we had away to those in need, and lived beggar poor, along with his disciples, to enter the kingdom of heaven.
News flash - Christianity is NOT about having more power, prosperity, and/or control, in your life.

And if you don't know that is actually the basic tenet of Christianity, then despite your claims of Christianity, I truly don't know what your faith is based on, but it ain't Christ -  nor the gospels/actual words of Christ himself - you know, our actual messiah and the actual son of God?

Now, back to our misguided, self-deluded Christian brothers at the Capitol riot ... 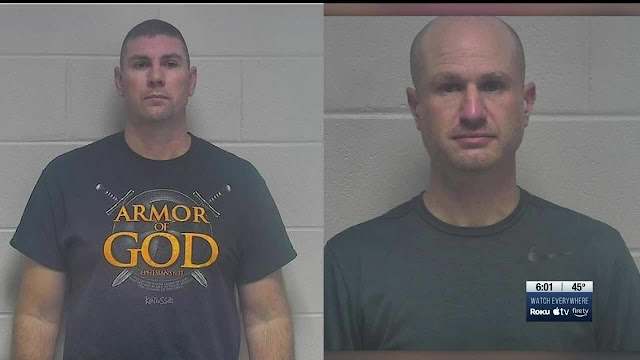 Beside Michael, in this photo, is Chad Barrett Jones, Cox Creek/Mt. Washington, KY, as the FBI arrested them on the same day.

Chad broke the window to the Speaker's Lobby and also assaulted an officer. His charges are assault on a Capitol officer, destruction of government property over $1,000, obstruction of justice, unlawful entry on restricted building or grounds, and violent entry and disorderly conduct on Capitol grounds. 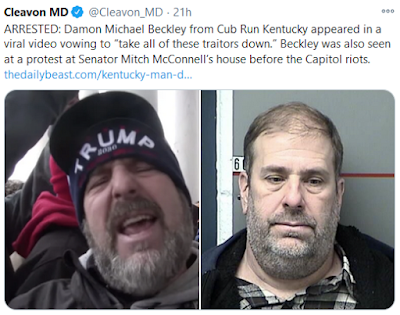 He also rambled on YouTube about "Taking down 'dem traitors" and later blamed Vice President Mike Pence for Ashli Babbitt's death, saying, "Her blood is on your hands,"  apparently because Pence did not support overturning the election results, in the end - which of course, makes no sense and refuses to take responsibility for their own actions, but that's a Trumper from Kentucky for you!

Jordan Revlett, Owensboro, Kentucky - posted a Snapchat video of entering the Capitol.  Additionally, his video was helpful in identifying the pro-Trump Capitol police cops who let them in and were ultimately suspended - which, mind you, I alluded on here to suspecting the day this happened, but kept those suspicions to myself until those cops were suspended ;) 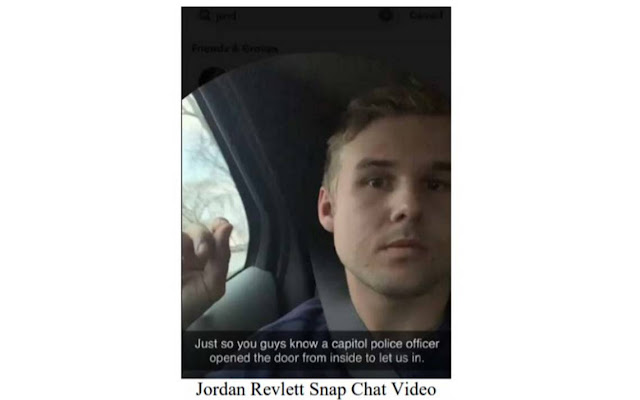 Robert Bauer, Cave City, KY - posted an Instagram video of himself to and his cousin (from Winchester, VA) entering the Capitol.  Charges are unlawful entry, criminal trespassing, and disorderly conduct. 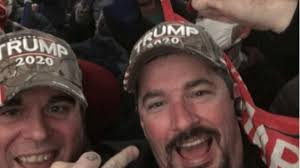 Dalton Crase and Troy Williams, Lexington, KY - took pictures from their cell phones, but did not post them - they were identified via anonymous tips. 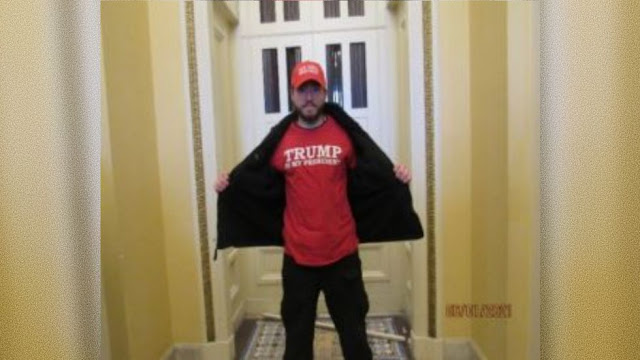 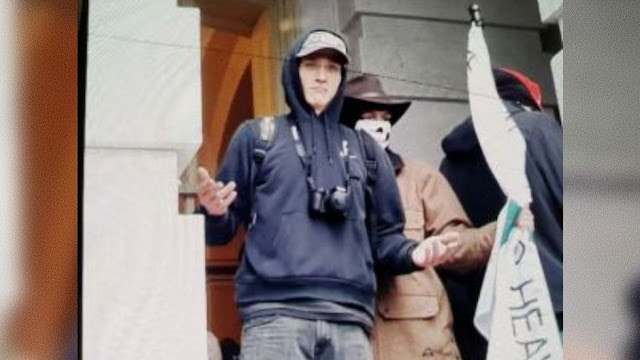 Peter Schwartz, Owensboro, KY - was hiding in Uniontown, PA, after the FBI posted him on their most wanted list, after macing a Capitol cop. 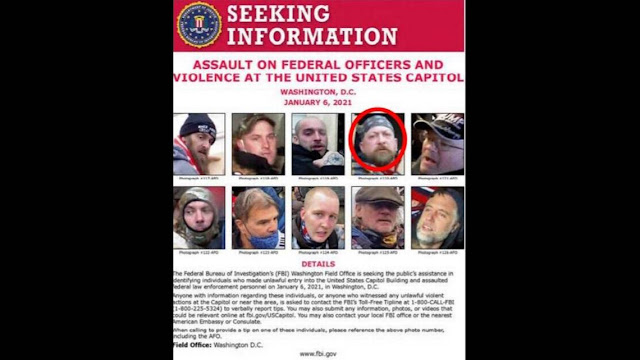 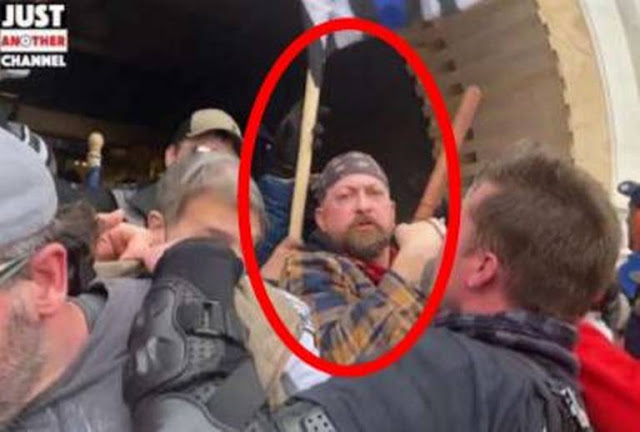 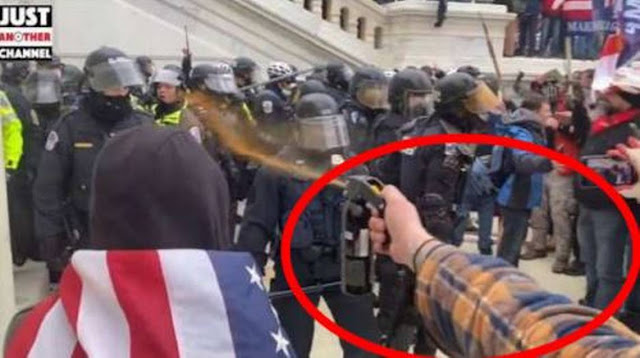 Now - what I do NOT see, in any of these 8 arrests, are any Antifa members, people of color, Muslims, or Marjorie Taylor Greene -  nor did any of the 8 reference her in any of their arrest remarks - just Trump or Pence - and yet let's continue to go after Antifa, people of color, Muslim, and Marjorie Taylor Greene more, because that totally makes sense
One more time -  *Sarcasm* - on the latter part of that last sentence.
And can I just remark on how many of these Trump supporters seem to have addiction issues - alcohol, drugs, and/or religion?
It's difficult to say which came first, the unclear mind or the addictions, but regardless, addiction doesn't help keep a mind clear, that's for sure.
Also, I'd like to just add that I have never once seen, read, or personally heard of any real evidence of "religious persecution" of Christianity, in this country - and I'm a devout Christian.
I've heard the right-wing/Trump supporting media claim this - as well as people on social media - but I've never once seen or heard any credible evidence that this is actually the case, anywhere, anytime, whatsoever.
Therefore, if people are falling away from Christianity, we need to blame no one else but ourselves as Christians, it's our own fault - because of the types of things we've been condoning, supporting, and encouraging as being "Christian" - despite those things being in direct contrast to Christ's message.
In fact, I must admit that though I'm a Christian, I am more reluctant than ever to attend church and hang out with other self-proposed Christians in my area; and further, I'm ashamed of them as fellow self-purporting Christians.
That is because to them, being a Christian is about their idolatry of Trump and protecting just their prosperity and their personal civil rights above everyone else's, as well as stances on abortion and gay marriage.
All this, despite the fact that none of those "works" have a thing to do with the actual words of Christ and Christ's message of peace, mercy, grace, compassion, giving, forgiveness, and coming from a place of love; and those things are, in fact, quite contrary to Christ's message.