All is well, after a snowy/ice-covered week.   Unlike Texas, most people that lost their power got it back by Wednesday, no one was told they needed to boil water, and we got our streets cleaned by ... well, yesterday? lol.

(Well, it's actually an equal-opportunity politician roast, of both Republican Senator Ted Cruz from Texas for his abandonment of Texas to Mexico, and Democrat Governor Andrew Cuomo of New York's abandonment of factual and actual lives lost in NY nursing homes.) 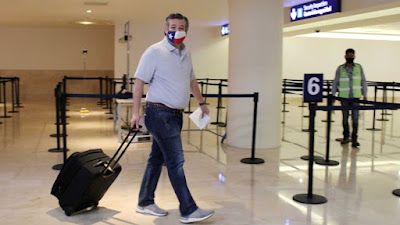 Ted ...  Buddy - I'm not sure just waltzing back in with a Texas mask is gonna save you this time, but maybe ... because, well, it is Texas ... possibly the only state that's a deeper, more blind-anger shade of red than Kentucky or Tennessee.

Well, at least he finally admitted it was a mistake (well, after texts were discovered proving it was his idea, after he initially blamed his daughters) - but the people of Texas are still waiting on an apology.

I just love the excuses the modern GOP make that their constituents believe without question.

Erm - I'm pretty sure Texans voted him into that office, though, Dimwit Jr.  - but then again, no one really expects you, or your family, to know or understand how our government actually works, nor what the constitution actually says -  nor just the general concept of unselfish duty, for that matter.

I don't know about you, but I'm getting very tired of these Republican excuses, the past 20 years or so, that they can't be at natural disaster sites - whether it's their home state or not -  because they're federal level or weren't formally invited - if nothing else, be there to help relief efforts as a civilian and/or the morale boost?

Now, what is true is that the constitution does say that the actual POTUS cannot send disaster relief/aid and/or military relief/aid until it's requested by the state's governor - but visits to the area can be done at any time, once the area is deemed safe.

To that end, President Biden told reporters on Friday that he will be there likely next week, whenever his visit will not be a further burden on their resources.
I don't know, Texas Republicans - but you've required an awful lot of federal relief aid, this past decade or so, due to hurricanes, floods, and snow emergencies - so you might want to rethink your anti-government stance?

They refuse to believe it's even possible that over half of Americans voted for Biden, but will believe the New Green Deal is to blame for Texas' power outages, lack of preparation, and road clean-up  - even though it hasn't passed in Texas yet (or anywhere) - just because their politicians and imaginary Twitter personalities said so/posted a fake meme - LOL!

Speaking of the New Green Deal (and its proponents), did you know that while Ted Cruz jaunted off to Cancun, Alexandria Ocasio-Cortez was in Texas, filling food boxes, and raised $4 million for relief? 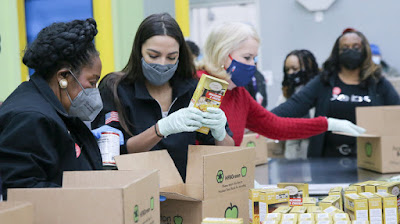 Say what you will about her, but she's a federal-level politician, who's not even from that state, and she was there, and raised $4 million for relief to boot.

Otherwise, back to SNL - unfortunately, I missed it last night, so I'm just watching the highlights - but apparently the host of SNL was sexiest man alive, Rege-Jean Page, from Bridgerton ...

Otherwise, folks, all is well here, still a bit icy, but otherwise happy to have kept power on to work, and I've also taken this opportunity to do a total house clean - walls, ceilings, baseboards, vents, everything.  Woo hoo, fun times.

Otherwise, back again soon with Part 2 on my cheat sheet history of American home architecture ...