As I added to the PS in the post prior, I didn't bet yesterday or get any intuitions, as per usual, I didn't have time.

I had no favorite in this race, but I did like 'Tiz the Law's backstory, as well  as Storm the Court.

We turned off the race the moment we saw Bob Baffert win again, so we missed this ...

Derby winner, Authentic, appearing overly jacked - and despite no fans present - spooks in the Winner's Circle, and knocks Bob Baffert down ...

Nobody deserves a swift kick in the arse by his own horses  more than Bob Baffert  ;)

Now, of course, if he was seriously hurt,  I wouldn't be saying that.

Also, if Bob Baffert were a nice person with a good reputation for both the way he treats horses and jockeys, I wouldn't be saying that.

Bob Baffert's unsafe, dirty play is an open secret, here in Kentucky - he is infamous for no level being too unsafe for either jockeys and horses to win - which is why no one will ever file an inquiry against Bob Baffert -  because they're afraid of him :(

First of all, in 146 years, a horse has never behaved that way in the Winner's Circle, especially with no fans there to spook them - and we can all see for ourselves, that horse was clearly overly revved up, to an OTT degree.
Secondly, take a look at what happened with Baffert's other horse in the Kentucky Derby, A Thousand Words, just before the race ... 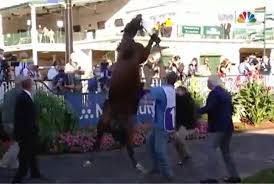 A Thousand Words, also acting overly jacked, was scratched just before the race. While in the paddock, he rared up and nearly flipped himself over on his back.

A Thousand Words - completely different horse than Derby winner, Authentic - but both horses horses appeared overly jacked, and both horses were trained by none other than Bob Baffert.

And of course, who's standing right there when both A Thousand Words and Authentic freaked out?
Bob Baffert.
Don't you find it  overly coincidental that both Baffert horses seemed so OTT jacked and freaked out, despite no fans present?
So ... is it possible they were illegally "juiced"?
Are they afraid of Bob Baffert?
Some combination of both?
Lastly, always watch what happens right out of the gait - because that's where the dirt usually happens.

For example, it appeared that Mike Smith drove Honor AP directly towards 'Tiz the Law" right out of the gait - which is, of course, not only illegal, but shocked us - we've seen that many times before, but never from Mike Smith, previously famous for clean rides.

Also, John Velasquez "drifted" Authentic over directly in front of Tiz the Law in the last stretch, which is also unsafe and illegal.

Had it been anybody else but Bob Baffert, an inquiry would've been filed - but notice how nobody every files an inquiry against a Bob Baffert horse or jockey, current or former?

As my husband just said, "Bob Baffert is the Donald Trump of horse-racing" - which is why we turned it off, disgusted.

I hate to be so negative, this week, it's actually the same theme - no level is too low to stoop, too dishonest, or too dangerous for everyone else,  to win.

Regardless, Bob Baffert is an unsafe trainer, for both jockey and horses, and it's dangerous, so it needs to be said - and we're tempted to stop watching racing until somebody besides the horse himself finally does knock Bob Baffert down from his reign of terror.