An Annual Subscription to Stars and Stripes is on Labor Day Sale for $19.99, Right Now

Just an FYI, for those worried about the future for the military newspaper, Stars and Stripes, it's on Labor Day Sale, right now - you can get an annual subscription for $19.99. 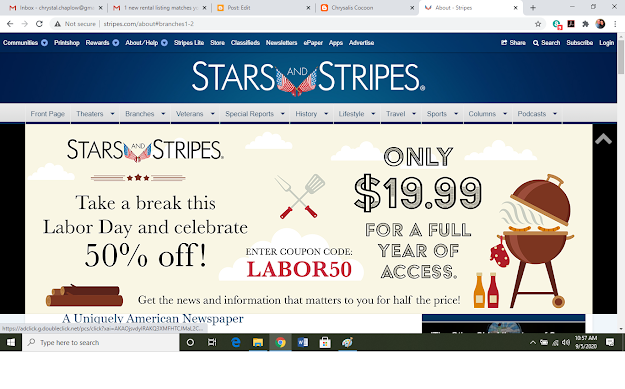 At the moment, we're holding on a subscription until after the election ;)

However, Mark then said: "Wait, though - this means if he and the Pentagon aren't going to shut it down, then it will be subject to Trump's authoritarian-style leadership and censorship, calling any news not favorable towards himself "fake news" - and you can be court-marshaled for not following Trump's orders as Commander in Chief.  In fact, if Trump ordered Troops to go in and attack liberal cities to put down opposition to him, they'd have to do it - and he's just a stone's throw from doing that.

Me: "True. But the other side of that coin is that many of the reporters for Stars and Stripes either aren't military or are no longer military - they actually also work for Cox Media and other news publications; therefore, they are not only NOT subject to court martial, but considering this possible defunding has made national news, if they are told by Trump to censor the news, you know we'll hear about it from the other news agencies that they work in conjunction with."

"Trump won't last forever, legitimate press should - keeping this paper alive, despite efforts to squash its voice completely, is most important, here, in my opinion."


Mark: "Yeah, but especially up until the election, it will be heavily pro-Trump, and I don't want to contribute in any way to that.  Let's hold until after the election.  I'm willing to pay the full $40 a year and avoid that."

Thus, personally, we're going to hold off on a subscription until after the election, paying the full price, if need be  :)


Regardless, though Trump has since tried to play himself off as the hero, now, in hindsight - by tweeting that he's "saving the military newspaper" - the fact is, he is the Commander in Chief, which means he controls the Pentagon and their budget, so he had to have approved that cut to the military newspaper "Stars and Stripes" initially.

Now - even though there were multiple sources, because the sources were unnamed in the Atlantic article, I have withheld opinion on the story about refusing to visit Belleau Wood cemetery and other veteran cemeteries while in France, allegedly both because the rain would "mess up his hair" (how is that even possible, it's already a mess?) and called those who lost their lives "losers" and "suckers."
Speaking of "multiple unnamed former administration sources" - including a retired general - what does that mean?
That they're not afraid of dying for this country, but they are afraid of  losing their job and/or what Trump says about them on Twitter?
Seriously - there really are different forms of bravery and cowardice, aren't there?

Well, perhaps if they had stayed soldiers rather than playing politics, then they've have nothing to be afraid of as far as reputation ruin, now wouldn't they?
I didn't rule it out, of course, and in fact considered it likely, considering what he said about John McCain being a loser for being a POW on video.

Instead, he is announced cutting the funding for sensitivity training for things like racism and sexual assault and harassment, calling them "anti-American."

I'm not convinced of the effectiveness of these programs, myself, but they first of all, they are meant to be team-building, and most importantly - they provide legal protection from the institution if there are incidents of sexual assault and racial persecution, and retaliation for those things.

Speaking of retaliation - it is interesting that he's so focused on cutting military funding somewhere, after this news broke, isn't it?

And if the "losers and suckers" story is true, you DO realize, ladies and gentlemen, that viewing POWs and lives lost in battle as "losers," instead of providing the ultimate sacrifice for their country, would be yet more evidence of  Trump having literal Nazi mentality, right?

I think what is also true about Trump, is what the unnamed retired military general allegedly also said in the Atlantic article, that he can't imagine not doing anything for personal gain shouldn't be done.

Regardless, to me, defunding certain military programs - including their newspaper - is not only censorship, but it is about 1000 times more "anti-American" than kneeling for a flag or sensitivity programs ever even thought of being.

(FYI, for the ignorant - the reason why people kneel for the flag is to still show reverence and deference for the flag, while at the same time recognizing that there is a double-standard justice in this country, for people of color and the poor.)


Also, by the way, the history of the Stars and Stripes newspaper may also come into play, here - the full history is here, but it began in 1861 during the Civil War, when Union Army captured a newspaper printing press from the Confederate Army in Bloomfield, Missouri, and took over publication.

If you are interested in helping to avoid total defunding the military's newspaper, Stars and Stripes, please see their subscription info through the first link and/or HERE.

Otherwise, still wondering how conservative publications can talk out of both sides of their mouths and condemn ALL protesters in America, despite being peaceful, but condemn police brutality in Belarus.

However modern/neoconservatives began to defy logic about 15 years ago or so, so I don't even try to understand it anymore - I gave that up for Lent this past year  - and week, actually :)


PS - I see several people coming over from other blogs; some are friends just checking in; and some - aren't.


Regardless, just an FYI - I really did remove all remaining Trump/alt-right bloggers from my blog reader and bookmarks, last week,  and I have not been back since and I am not going to go.

That is because I spent over a decade, repeatedly trying to be fair, listening to both sides of these political issues, and encouraging the conservative right to have a voice, even if I didn't agree with it - never receiving the same in return.
It's become clear that that modern/neoconservatives have abused their privilege of freedom of speech, by promoting fear/hate propaganda and other lies to demonize people of color, other faiths, and even us as their fellow American Democrats - including accusing me personally of things I never said or did.
Modern-day/neoconservatives AKA Trumpers appear to be only concerned about their rights, their privileges, and their social justice, as well putting their money above the money, lives, and livelihoods above everyone and everything else.
Not only is that NOT in line the base premise of the Republican Party or the definition of conservatism, but it is the furthest removed "religion" from the actual words of Christ and Christianity that I can think of; in fact, I would even go so far as to say it's anti-Christian.

Because the basic premise of the Republican Party is less government intervention/regulation and control/more civil rights, and being a conservative, by definition, meant people who take a strict, conservative approach to the constitution.

However, clearly, that is NOT what neoconservatives and Trumpers stand for; in fact, it's clear they stand for exactly the opposite - unless you look and believe exactly as they do - which is actually taking a liberal approach to the constitution, anti-Republican, not to mention both communist AND fascist simultaneously in mentality and practice - in the sense that both are authoritarianism.

Which is, of course, what makes neoconservatives and Trumpers the ones who are "RINOs" "posers," and "anti-Americans,"  in the end.
Thus, I've decided to just ... stop listening :)

They've made it clear that they are never going to do the same, because  they don't care what anyone who disagrees with them has to say, and in fact, they hope we are silenced - because to them, we're the "enemy," that "all is fair in war" and even libel becomes twisted into "freedom of speech and press."


Thus, after over a decade of repeatedly being willing to at least listen to what they have to say, validating what I agreed with and politely disagreeing with what I didn't - never receiving the same in return (actually twisting my words and falsely accusing me) - I've decided enough is enough - enough time, enough chances.

Lastly, also because it has become abundantly clear that anyone - with the exception of the uneducated, those of lower IQ, and/or people brainwashed in cult-like evangelical religious belief - that still hasn't figured out how much of a pathological liar and con Trump really is, how dark his soul is, by now?

They've repeatedly proven to me that they don't care Trump cheats, compromises national security, and is a greedy, selfish, pathological liar and con, anything to "win" - mostly because they are often dark-souled, greedy, selfish, cheaters,  pathological liars and cons themselves - whether they claim to be a fellow Christian or not.
In fact, it pisses me off that  greed, selfishness, and deception, at the expense of others' lives and livehoods,  have now become synonymous with Christianity, thanks to Trump types of Christians :(


However, I'm not going to stop talking here (despite a few people who have tried to go to great lengths to shut me up) - because freedom of speech goes both ways - and unlike them, I don't abuse that privilege by spreading dysinformation and lies - and this is MY house :)