On Justices and Justice ... And The Lack Thereof ...

University of Kentucky students gathered at the Wildcat statue at Memorial Hall, here in Lexington, to protest the Breonna Taylor decision.

The protest was peaceful and there were zero violent incidences reported, but four protesters were detained - we're not sure why yet. 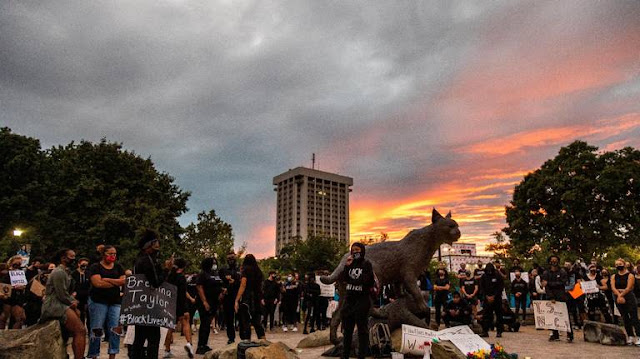 I said this the other day, when I heard the verdict, and I understand Breonna Taylor's family is in hopes for the same thing now - but I'm afraid there may be a catch.

I said I was glad the FBI did a separate investigation - with blatantly different results than Kentucky law enforcement - because it means they CAN step in with their own federal trial if unsatisfied with local results - and we can all hope that if so, the FBI at least SAYS HER NAME - which the Commonwealth of Kentucky did NOT do, when reading the outcome of the trial - as if she never existed and her life had no value at all.

*HOWEVER* - and I'm not 100% sure - but I believe their may be a catch - I believe President Trump can stop an FBI investigation/trial or the DOJ can?

As for a new SCOTUS to replace RBG, I haven't much to say - I'm not surprised they'd pick one in an election year, despite the GOP hypocritical bashing that possibility when Obama was in office - I mean, really, are you surprised with that hypocrisy?
All the GOP bellyaching about "abuse of power" and "lack of transparency" and "authoritarianism/communism," when Obama was SCOTUS, only to turn right around and be power-abusing, Communist-behaving, opaque decision-makers and abject lies about those decisions - no one should be surprised lol.
(The modern GOP - and especially Trump - love to project their own motivations and what they would do, onto other people, in deflection of their own misdeeds - and it keeps working :/)

What I AM surprised at is that there hasn't been a constitutional amendment for us to vote on SCOTUS judges yet, rather than  presidential appointment, despite the fact that this has always been a bone of contention in this country?
Nor why they are allowed to serve for life - most people have trouble getting their parents and grandparents to stop driving, if they feel their judgment is impaired, past a certain age - so how would you stop one from ruling on cases? lol

In fact, I can't understand why our forefathers didn't foresee that becoming a problem, or why they did it in the first place, considering at the time, they were trying to avoid too much power in one person's hands after an oppressive king abusing power, and the SCOTUS is the supreme law of the land?
I mean, I get it somewhat - the idea was supposed to balance power between the parties over time rather than short-term - but it's turned out to be nothing but political-battles creator.
I don't know, maybe Congress just likes to fight and wants us to fight over it - and it's clear this president does :)

I'd still be okay with Congress grilling them first in congressional hearing  - but I'd also like to see the same for a voted-in President ;)

_________________
PS - I understand that Charles Barkley and Shaquille O'Neal have drawn flack for saying that Breonna Taylor's case shouldn't be "lumped in" to the same category as George Floyd and Ahmaud Arbery, because Breonna's boyfriend, Kenneth Walker, fired on police raiding/barging in, thinking they were an intruder/Breonna's ex-boyfriend.
That's true - and I get where they're coming from - but again, Breonna wasn't armed, she was lying in bed, and no crime had been committed - and despite what police claimed, all but one witness said police did not identify themselves upon entry.