Breonna Taylor Grand Jury Ruling is In: One Officer Indicted on Wanton Endangerment (But Not for Breonna's Death), Other Officers Not Charged ...

A wanton endangerment charge - *for the bullet that landed in her neighbor's apartment - NOT for Breonna's death.*

Here's the definition of wanton endangerment, according to Kentucky Law:

"(1)A person is guilty of wanton endangerment in the first degree when, under circumstances manifesting extreme indifference to the value of human life, he wantonly engages in conduct which creates a substantial danger of death or serious physical injury to another person.

(2) Wanton endangerment in the first degree is a Class D felony."

Because if the reason they were shooting at Kenneth - who shot first, thinking they were her ex-boyfriend barging in - was self-defense - then why make any charges at all?

Erm - did y'all not read the legal definition of wanton endangerment, according to Kentucky law?!?

Seriously - there is no way to look at this ruling that makes any sense at all.

I at least expected the charges related to her death, and at the very least, a charge of manslaughter?!?

But her death as the result of stray bullets fired at Kenneth isn't even legally wanton endangerment - just the bullet that went into the neighbor's door??
No other charges were made, to include the other officers who participated in the "no-knock" raid.
And again, may I remind you that this was a wrongful raid - Breonna's ex-boyfriend was using her address, to have packages delivered to her address, that he picked up, without her knowledge.

This isn't enough, and really, it makes no sense - and I know it won't be enough to stop protests and rioting.

Louisville may be set on fire, later tonight. We shall see.
God, help us :( 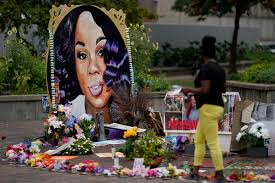