Current Good Reads: "Vanderbilt: The Rise and Fall of An American Dynasty" - Anderson Cooper, and "Where the Crawdads Sing" - Delia Owens 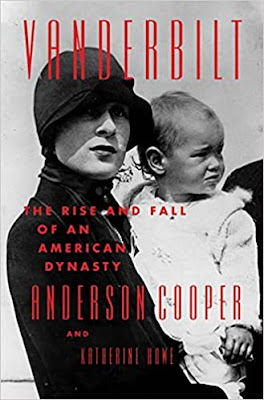 "Inequality is as dear to the American heart as liberty itself"

~  William Dean Howells, as quoted in the Introduction to this book, by journalist (and Vanderbilt descendant),  Anderson Cooper, and coauthor, historian and historic novelist, Katherine Howe.

Ain't that the unfortunate and politically inconvenient American truth?

So I just received this book (and the one below from Amazon) yesterday, and just begun to read.  I chose to begin with this one first, having been released just on the heels of us having visited the Biltmore Estate for our anniversary - and I can't put it down.

Let me start by saying that it's not their wealth (and the loss of it)  that interests me, because I'm definitely not a "royalty" watcher, nor a idolizer, of anyone - especially not the wealthy set.

It's actually the humanization of them that interests me - not the fall from grace perspective, but the myth-buster aspect;  the fact that underneath it all, we are all the same - unique, maybe -  but still  all too human, and thus fraught with the same frailty and foibles as everyone else, in the end.

Though biographies had been written before on them, it's an interesting take from an actual Vanderbilt, though Anderson has always made it clear that he identifies more with the Cooper side of his family, from rural Mississippi, instead of the Vanderbilts - with almost a hint of shame of his Vanderbilt side.

As he has said in interviews about the books, he met them as a child, but avoided them.  He viewed them as lay-abouts and snobs, who never worked for a living, though his father, born on a small farm in Mississippi, taught him to work from an early age and the value of human beings -  not value in a monetary sense, but value in a human-connectivity sense.

In fact, he had to teach his mother, Gloria, how to open a bank account and a savings account (because there was nothing left of the family fortune, she made her money through fashion design and art - with the Vanderbilt name attached, of course;)

However -  then his son was born - and as Anderson Cooper puts it in the prologue:

"When my son was born, what will I tell him about them?  What do I hope he learns from the lives they led, the choices they made?  In order to answer those questions, I began researching these people I had avoided for so long  This family.  My family."

The Vanderbilt story somehow manages to be both unique and also, deeply, universally American. It is a saga of wealth and success and individualism, but as it turns out, those aren't necessarily the universal goods our culture likes to believe they are.

A few central myths appear again and again in American's popular imagination; that success is available to anyone who is willing to work hard, and that success is worthier of celebration if it is achieved without help.

(As if any success were truly achieved alone; even the "self-made" Commodore got a crucial early loan from his mother when he was sixteen.)

We still catch ourselves subscribing to this Horatio Algeresque celebration of entrepreneurship, of individualism, and, by extension, of wealth.

We somehow, simultaneously, believe that we are all the same, all created equal, and yet we secretly suspect that the rich are somehow more special, that they have something figured out that the rest of us don't know.

We see this embedded assumption play out every day in our modern celebrity culture and in our politics.

In writing this book, my coauthor, Katherine Howe, and I wanted to explore how some of the Vanderbilts - people with personalities and weaknesses and foibles, who found themselves living the ultimate American myth - actually felt as their lives were unfolding.  The personal stories we recount focus on a few individuals rather than on the grand sweep of the Vanderbilts' business empire or the expansion of railroads into the wilderness.

Commodore Cornelius Vanderbilt founded a dynasty that would rule the Gilded Age, and his rise was dizzying.  He possessed a genius and a mania for making money, but his obsession with material wealth would border on the pathological, and the pathology born of that wealth would go on to infect each successive generation in different ways.

A family story about wealth and triumph becomes, in some respects, a story about sadness and isolation.  But it's also a story of unexpected poignancy and truth that shifts our understanding and expectations about this name "Vanderbilt" that we imagine we already know.

The Vanderbilts were the original new-money arrivistes who burst on the scene, used their wealth to buy prestige and respectability, and churned through their fortune not in the cause of making lasting change, but on massive outlets for conspicuous consumption.  Vanderbilt millions bought palatial houses, astonishing yachts, cars in the hundreds, and jewels both magnificent and rare.

But under the buckets of ink spilled on their exploits by newspapers and behind the magnificent, and temporary, marble walls constructed of the Commodore's money, unfolded private lives both messy and insecure, nuanced and complicated, sometimes irredeemable, but always fascinating.

Well said, and I've often said the same - that whether public assistance or private assistance, no one is self-made - somebody helped you to be where you are -  if not your parents or grandparents, then by nothing more than giving you your first job or chance, or even public assistance - and there's no shame in that.

I could only add to his intro, as example,  perhaps to ask the descendants of slaves whether hard work was enough to succeed in America :/

Thus far, it appears that in researching his family, though he tries to empathize with all, he has clearly chosen favorites and essentially damned others to hell lol - and they're not who you think they would be.

For example, definitely not a fan of the Commodore, whom he describes using such adjectives as "ruthless," "pitiless," "avaricious," "narcissistic," and "attention-seeking," as well as having a pathological obsession with money and material possessions.

In fact, the only redeeming thing I've read about the Commodore thus far is that he bought one home on the same block as the old money, Washington Square (before there was 5th Avenue or Park Avenue, there was Washington Square) and continued to live there, despite being shunned his entire life by the old-moneyites who refused to accept him because he was "nouveau-riche/new money."

This makes me laugh, but at the same time, disturbs me to discover this same person treated others just as worthless as the old-money set had treated him :/

It reminds me of the religiously persecuted coming to America for refuge, then promptly proceeded to religious persecute others, it makes no sense.

Regardless, Anderson clearly does not respect any of the people that flaunted their wealth or were obsessed with buying respect - but instead,  those that at least attempted to use their wealth to help not just themselves and their own family, but lives of others :)

And just in case you're thinking, "Well, Anderson certainly received help, he was a Vanderbilt," that's the point - that we all received help, no one is self-made, including Commodore Cornelius - it's what you do with it that matters and pass it forward.

Plus the fortune was gone by the time his mother reached adulthood, so there was none left, and he also states his personal battle was trying to make a name for himself and gain respect that was separate from the Vanderbilt identity.

Bravo, Anderson, both well said and done - and a good read thus far :)

Btw, I'm simultaneously reading "Where the Crawdads Sing" by Delia Owens, about North Carolina (the author herself living in the Blue Ridge Mountains today, but only read the first two pages after first reading more of Anderson's book, and it was midnight - but it's already drawing me in for more :) 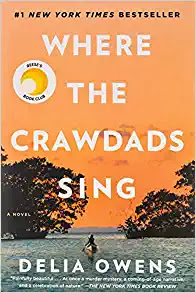 I often do this, read a couple of books at the same time, because it depends on my mood, fiction or non-fiction, that day ;)