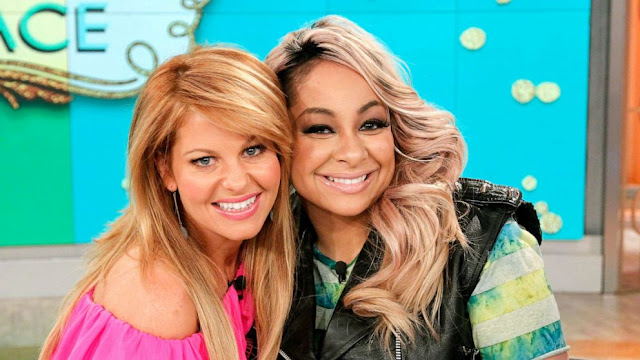 Candace Cameron Bure (left in the above photo) - formerly of Full House -  has announced that she "thinks she has PTSD" after her stint on The View, and that she didn't expect to talk about politics, just light stuff.

I first thought to myself - erm - had she not seen The View before she agreed to come on it, and had no one told her she was specifically being hired to represent the conservative woman's viewpoint, to replace Elizabeth Hasselbeck?

That sounded hard to believe - HOWEVER - Raven-Symone (above right, in the photo)  - formerly of The Cosby Show - who is black, gay, and on the opposite side of politics - added further explanation and semi-support to Candace, stating that though she doesn't agree with Candace's political opinions, they are still very good friends - and then filled in the blanks left by Candace.

She explained that what Candace meant is that both she and Candace were "catfished" by the producers, who sold them to come on the show by using the pitch of trying to change the face of the show and the show's reputation by hiring more positive people, hopefully to broaden their audience, and lighten it up, and make it less political - but they didn't.

She added that her time on the show was unnecessarily and extremely stressful, too - but she did NOT say she thought she "had PTSD" because of it.

Regardless, it wasn't Candace's political stance that irked me, nor the  tale of the producers lying to both Candace and Raven-Symone about their presented intent of changing to a more positive face of the show VS. their actual intent for the show during the Trump era.

That part, I totally believe  -  because the more fights that producers can instigate, especially on daytime or Reality TV, the better the ratings.

No, what irked me is the fact that as someone who has been officially diagnosed with PTSD by a licensed professional, I've noticed that over the past few years, people - especially women, right OR left in politics - tend to throw this diagnosis around lightly, without ever having been professionally diagnosed, and without educating themselves on what that really means.
It's not only socially irresponsible, but almost an unintentional insult -  or at least a minimization of -  how crippling it is, lifelong, for those of us with the full-blown disorder.

Candace, on the other hand, is a better representative of your typical conservative woman, rather than what we see on the news and in politics - a very kind, reasonable, calm, articulate, and compassionate person, who believes in the compassion of Christ, and is not racist.

(For example, she famously cried and spoke out, just as much as liberals, against what happened to George Floyd.)

I don't always agree with her, no, not even usually, do I agree with her - but I do understand where she's coming from, at least.

Having said that, on the negative side, make no mistake, she is a conservative, and thus comes across as rather naive and overly simplistic in her views and solutions, and as having lived in a sort of sheltered Christian bubble, with much to learn about what it's like to live in in America as a poor person, person of color, or without the perfect Christian family.

(Hey, we all have much to learn about the experiences of others from less fortunate backgrounds in America - but some people more than others ;)

Thus, I wrote this to her elsewhere ...

Candace - I didn't see where you were diagnosed by a professional, and I wonder if you might be confusing PTSS and PTSD?

PTSS is the short-term syndrome, and PTSD is the longer-term disorder, and it takes being diagnosed from a professional to tell the difference.

I know that this diagnosis has become a pop-term, and yet still, we can't just self-diagnose and contribute to throwing these terms around lightly.

My unsolicited advice would be first to seek a professional opinion on a diagnosis and educate yourself on these disorders, before announcing this to the public as fact.

It may also be to your benefit to speak to people with that official diagnosis of PTSD (rather than PTSS) like soldiers and/or rape and domestic violence victims, whose symptoms don't dissipate as easily.

Secondly, I know that you have a compassionate heart and are very sensitive, and a Christian like myself, so I don't want to minimize or invalidate your experience, but at the same time, just a little truth is good medicine; it can set us free/help heal - I also know that you appear live in a sort of naive Christian bubble and don't have a lot of experience with others' experiences outside of that and have much to learn from people that haven't been as lucky.

And I do have to tell you/warn you, what you are saying will likely be construed as white privilege and white fragility, to be able to avoid the unpleasant when it suits you - and they may have a point?