My husband just sent me this - I can't believe I'd never seen it!

(Because he knows that Sting is one of my imaginary co-husbands lol.)

This is awesome, it made me so happy today! :)

And the addition of Shaggy's Jamaican rap and lyrics are brilliant! 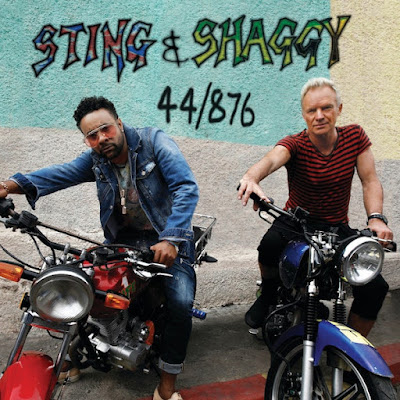 The original song, however, is found on one of my all-time favorite album's, Sting's solo project, "Nothing Like the Sun,"  where he delved into the fusion of reggae and jazz with rock even more than The Police did. 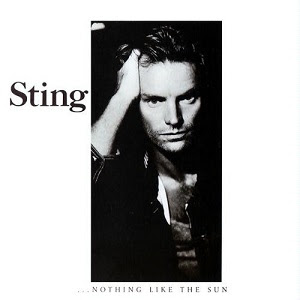 PS - My husband just wrote back and said he'd never heard of this before.

So ... I'm going to assume he meant NPR's Tiny Desk Concert series, which is  hard enough to believe he hadn't heard of, because it's been around for years (and I've played youtube videos from them, whether he realizes it or not) - because if instead he means he'd never heard this song in its original format, or of the second Sting album it's originally from, then that would be dang near blasphemy and an unforgiveable sin ;) lol

(Just kidding - as I said in the below post, I don't idolize/celebrity worship anyone, but I do respect Sting's talent and have since I was a teenager.)

Actually, he can be forgiven for not hearing much music from 1985 to the early-to-mid-90s, because he was an Army ranger and mostly out of the country until then -  in other words, he left during the height of hair bands, and came back just as grunge was starting to wane, and rap was at full-throttle momentum (which he loves) - so I've had to introduce him to that bit of music that he missed, during that time, to complete that gap in his American music education and evolution, poor thing :/

BTW, Guns N'Roses was a "yay," but most grunge rock was a "nay" - so sayeth Mark, according to his taste, with the exception of two Smashing Pumpkins songs ("Tonight, Tonight" and "1979.")

He likes alt-rock, which began before he left - just not the Seattle grunge sound, I guess.

But apparently, I left off a few bands during my introduction of music during this period - because my brother-in-law, who lives in LA, sent him a picture of jogging behind Dave Grohl, with a text that jokingly said, "Get out of the way, Dave" -  and Mark had no idea of who that was.

(I can't show you the private pic sent, of course, but this is Dave Grohl). 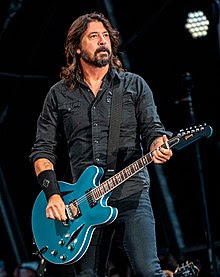 Whups - so I had covered Nirvana (where Dave was the drummer), but focused more on Kurt Cobain, I guess - but completely forgot to cover The Foo Fighters (where Dave was lead guitarist).

I think it's because even though I think Dave is multitalented, an icon even -  I'm not a big Foo Fighters fan - they are aren't in my top all-time favorite bands, even for the 90s, even in Grunge.

(That would be Dave's first band, when he was the drummer, Nirvana -  Pearl Jam, Smashing Pumpkins, The Cranberries, The Stone Temple Pilots, Garbage, Veruca Salt, Soundgarden, Green Day etc. -  pretty much in that order).

I just thought the Foo Fighters sounded too ... mainstream pop, to me, and still do?

(Green Day is borderline generic, too, but I liked some of their jams.)

I mean, I like pop, too, and I still I sing along, and laughed at their hilarious videos - it's just that other than Dave on guitar, the music itself is ... kind of generic and nothing special?

I mean, Nirvana, Pearl Jam, and Smashing Pumpkins, they each have a very distinctive sound, even though all still recognizable as within the grunge  category - you know immediately who the band is, after the first few chords.