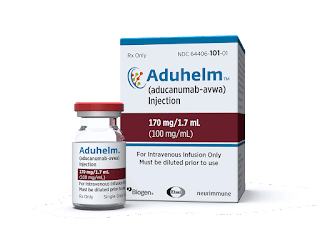 You may recall, I posted about my concerns about the new Alzheimer's drug, both prior to, during, and after its approval - first HERE, HERE, and then HERE.

Yesterday, the FDA made a rare reversal decision, excluding the drug to only patients with mild to moderate symptoms, and we also learned that Congress is likely to investigate the relationship between Biogen and the FDA, as well as the data provided (NYT).

I think this is appropriate - because as you can see, I wasn't alone in my concerns.

TBH, though, I don't think the reversal was much about what doctors and insurance companies thought and the backlash -  because they already knew what their reaction was going to be beforehand.

I say that because that's what I do - transcribe for an independent marketing firm the testing  double-blinded, market-test interviews between a manufacturer of a drug and clinicians and insurance company payers (both public and private) before the drug ever launches - just not for  Adulhelm/adulimumab - I want to be very clear that I did not transcribe any prelaunch market-test interviews specifically for that particular drug, before, during, or after its launch.

If even I knew Medicare and commercial insurance companies were going to balk and exclude it from formulary or make it difficult to get?

Then so did they -  because they do these market-test interviews months before launch  ;)

IMO, considering the effectiveness of consumer push on HIV medications resulting in insurance companies allowing access to all drugs equally - as well as the effectiveness of direct-to-consumer online - erm -"creative advertising" for modern politics - the new business strategy from some manufacturers is overly-simplified,  direct-to-consumer advertising - via TV, radio, and online - with the hope that this will push patients  themselves, and advocacy groups, to demand the drug in a consumer-driven push.

This is despite what may be best for them, and actually may be contraindicated due to other health conditions or medications, and without having access to all of the efficacy and safety data, especially in comparison to other drugs, or knowledge of the full price to both insurers and themselves, out of pocket - ya know, just like modern political advertising  ;)

I mean, we've all seen the direct-to-consumer adds for prescription drugs, asking you to ask your doctor about them - as if your doctor didn't already know about the drug, like years before you while it was in trial, and you think they're hiding it from you or-? lol

No, they are not - there's a reason they're not prescribing it for you and it's okay to ask them about that reason to understand why.

If the drug is efficacious and safe, these advertisements are fine - it's even appropriate for manufacturers to be excited about a breakthrough (like Humira was, though there are side effects and it's very expensive, so be prepared to step through other products first for a trial).
But what if the drug has NOT been proven to be efficacious or safe?

Some companies apparently don't care - they just hope the direct-to-consumer advertising will result in consumers demanding a certain drug for themselves, without knowing its lack of efficacy and safety data compared to other drugs in the category or class, because manufacturers don't do head-to-head comparisons with competitors (though we wish like hell they would) - they just want that money, honey.

In the case of Aduhelm, there are no comparators - and yet it wasn't even effective versus placebo!

So this is precedent setting - proving definitively that unlike HIV drugs, or even politics, the strategy of direct-to-consumer advertising, either on TV or online,  resulting in increased demand  by the consumers, will NOT influence provider-prescribing patterns  of the drug, nor will it influence an insurance company's willingness to pay for it - IF the drug does not have proven efficacy or safety data.

It also raises a red flag raising the question of whether or not the FDA engaged in an inappropriate relationship with Biogen, and we cannot blame either the Biden administration, nor current Congress, nor even necessarily Trump in this case, though we would like to and do have our suspicions ;) lol.

Because this drug has been in the works since 2015 and was initially set to be released last year, but asked for extensions in October, then again in March - which is why Congress is set to investigate.

Also note that Trump signed an EO on drug cost - which he curiously already knows is powerless against drug cost, because  it would take congressional legislation - specifically in response to Spinraza, the most expensive drug on the market, interestingly also made by Biogen to treat a rare condition of SMA (spinal muscular atrophy) that costs $600K to $750K the first year and $375,000 and purported to cure the disease, but didn't.

Its competitor Zolgensma, made by Avexis has proven it works just as well (neither actually curing at the rate they said) at half the price (because Biogen never came down versus it's equally effective comparator, breaking market rules) -  but either price is still breaking the insurance company and consumer banks for a drug that doesn't cure as they said it would.

Keep in mind, at present, insurance companies and their members have to pay that first-year hefty cost upfront - despite the average member staying on the plan for only two years, then their employer switches to another cheaper company and insurance gets stuck with the most expensive part of the bill, with the next insurance company paying the maintenance cost, and the likelihood that the second insurance company is going to get another SMA case and balance it out is probably less than 5%, considering  SMA is a rare disease, and it's uncommon to have even more than one member with SMA. :/

IMO, the FDA has been creeping towards overly fast approvals for years, as well as showing preferential treatment  for larger pharma manufacturers, and this needs to stop.

Now - having said that, though I was initially worried about the  COVID vaccines being too fast, unlike adalimumab, clinical experts agreed with the data, and they (meaning Pfizer and Moderna primarily, jury is still out on the others), the vaccines have followed right along with the initial data thus far, including surprising us by protecting us from the delta variant as well.

Well, it shouldn't be too much of a surprise - Pfizer and Moderna aren't made from strains of live COVID like J&J and AstraZeneca -  they're created from base coronavirus mRNA that we've had for over a decade - just add genetic components of COVID (or more accurately, gene-edit them).

But like I've said from the beginning, the first vaccine doesn't always mean the best, nothing is perfect, and things happen in the real world that didn't show up in a small trial - for example, there have been reported (and limited) cases of mild heart inflammation with the mRNA vaccines (Reuters).

Now, again, I do wonder if politics came into play on this one, because only the EU is reporting this, and we do know that they played some strange games on obtaining any vaccine to begin with, particularly the mRNA vaccines - it at least appeared they dragged their feet too long to get any vaccine until supply was low, then had to ask the UK and us for help (is that right)?

Now - that is not an overall indictment of the EU - but just like any large bureaucratic organization, public (government) or private (including pharma and commercial insurance companies), they are capable of doing great good for us, but are equally capable of making some really stupid, crappy, knee-jerk decisions; or conversely, dragging their feet too long over them.

Apparently manufacturers themselves agree the first may not be the best  - because despite the current vaccines showing better-than-expected efficacy against the delta variant, Prizer is coming out with a booster shot that will include extra genetic mutation data to the base mRNA to take every six months.

Regardless, back to Aduhelm - well done, key-opinion-leader experts and academia - and I'll even congratulate insurance companies, in this case, both public and private.
Thank you for looking out for us as consumers and doing the right thing, based on what you know the average consumer can't see based on simple TV/online advertising and biased press - to do what's best for US rather than yourselves, despite steep rebates/discounts offered :)
THIS is an example when managed healthcare works - public AND private working together to do the right thing - and it's to be commended, :)