June 7th is the FDA Verdict for Aducanumab, The Alzheimer's Infusion Drug 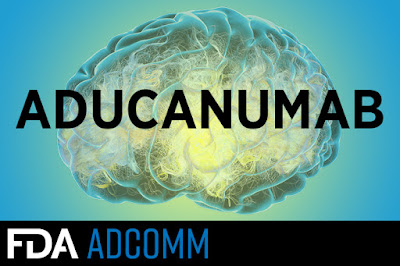 On June 7th, after a three-month extension given by the FDA on a PDUFA date, Biogen's aducanumab will receive either a "yay" or a "nay" from FDA, after being prioritized/fast-tracked by the FDA, due to pressure from patient advocacy groups, frustrated by what they considered pharma's recent over-focus on expensive drugs for rare and orphan diseases, rather than the most pressing diseases affecting millions.

To be clear, those of you who know what I do for a living - no, I have NOT transcribed independent marketing interviews for this particularly drug directly.

The only thing I have transcribed  related to this drug are interviews related to market readiness in regards to infusion centers and their preparedness for an influx of new patients.

Therefore, this means that though I usually transcribe in-depth analyses of the clinical trials on the efficacy and safety from KOLs, as well as and cost/benefit and coverage analyses by payers for coverage, for new pharmaceuticals, I have not heard or transcribed them for this particular drug; thus, I have formed no opinion from a professional standpoint.

Thus, I know what you know, gained from public press releases - that all previous trials of infusion drugs for Alzheimer's failed but this one,  which made it to phase 3 by the skin of their teeth, after an initial drop of the clinical trial, and then a reopening of the trial, and granted an extension - meaning the drug did not meet the primary endpoint within the initial trial period, but reopened the trial later, after they claimed the patients showed later improvement, in that they had a small reduction in amyloid plaques.

Additionally, apparently the FDA's independent advisory panel had concerns with the drug, citing data analyses problems, and therefore did not recommend it.

Additionally, many have concerns that the FDA appeared to almost be working in partnership with Biogen on approval for this drug (as I said above, due to pressure from patient-advocacy groups and the community).

As for the drug itself, it's a "mab" or monoclonal antibody, also known as a "biologic" or immunotherapy - simply put, cloned white cells, used to target and attack a specific area.

The way all mabs work is by finding a target spot on the inflammation cascade chain of a certain disease to work.

Thus far, we have had phenomenal success with mabs in things like rheumatoid arthritis and psoriasis, and moderate success in certain types of cancer, especially when combined with an oncologic treatment.

However, trials in other disease states have had less success or even often failed - and the premise of the failing is currently attributed to not finding the exact target spot on the disease-state's inflammation cascade yet.

This is possibly the case for aducanumab, which targets a very specific area along the amyloid cascade. 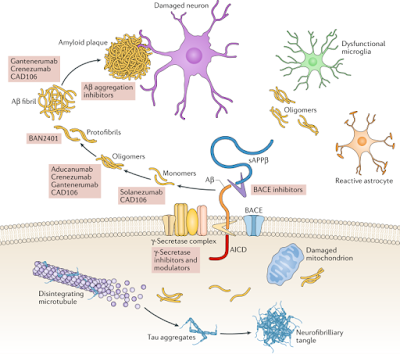 So what do I think?

Well, again, I have NOT transcribed interviews on this one, so I haven't heard the in-depth KOL and payer analysis yet, so my opinion is only based on public press releases same as you.

So in my non-KOL, non-MD, non-PhD opinion, not having transcribed the analyses on this specific drug -  but also having transcribed countless hours of pharma marketing research interviews on new pharmaceuticals  - is that they may be on the right track, but my concern is perhaps that they haven't found the exact right target area on the amyloid cascade chain yet; thus, I'm wondering if future entries to the market might be able to do so more effectively?

However, I also think if I were a patient, or the patient's family, and we've tried everything else and have nothing else to lose - why not have it approved and at least be allowed to try it, and if it fails it fails?

UNLESS - some of that "iffy" data mentioned by the FDA's independent advisory board was regarding the safety profile and severe adverse events, but I've not seen the details on what their concerns were yet.

But if that's the case, the advisory board's concerns were along the lines of safety and adverse events, then I'd say "Nay - let's wait for the next drug which perhaps finds an even better link the cascade chain to target."

Now, having said that - one thing is for sure - it will be expensive.

Thus, considering its equivocal efficacy, but likely high price tag, U.S. insurance companies will try to mitigate the cost, understandably - because should we really be paying six or seven figures for something that is only minimally effective and takes over the usual trial period of a year to work, and which can only be used in a limited patient subpopulation (in that it likely will only be used during a certain phase of Alzheimer's)?

They mitigate the cost by likely requiring strict-to-label parameters such as very specific candidates for treatment that match the FDA's approval label, and possibly step-throughs of other drugs (like Namenda) before you can use it.

One thing is for certain  - no, you can't get it just because Alzheimer's runs in your family and you're aging.  You will likely have to have an MRI and PET CT scan both to prove you already have at least one amyloid plaque.

Now - I wish I could say that future entries will bring down the price, but unfortunately, that's not how our healthcare system works in the U.S.

The reasons for this are multifactorial, but the two biggest reasons in the U.S. are:

1) Insurance companies control the market share rather than direct consumers, often based on the best discount/rebates they can get on a certain drug, all drugs being of equal or similar efficacy and safety within a class.

There might be a small price drop with "me-too" drugs, biosimilars and new class entries, over time, but not much - i.e. look at Humira (adalimumab).

Despite the multitude of "me toos" that exist in the class (no actual generics yet because it still has patent exclusivity, see below), it's still ungodly expensive, having dropped its price only minimally.

The economic theory on why this happened is not only due to market demand for an effective product, as well as discount rebates initially offered to insurance companies (considering other options already existed in the class upon entry), but also because Humira's patent has been reissued/extended several times due to now being indicated for several diseases other than it's original indication of RA.

Speaking of Humira, interestingly, it is likely one of the few drugs on the market today, other than cell and gene therapies,  that truly earned and justified a premium price the old-fashioned way -   though it's difficult in the pharma world, with insurance companies controlling the market share - Humira earned a premium through supply and demand, and having phenomenal efficacy.

Because Humira was not the first mab in it's class for RA, it entered the market later, and there have been class entries since  - but Humira was found in real-world evidence to be the most effective, and with less side effects.

However, though we agree that drugs like Humira have earned a premium price, I'm pretty sure over 100 grand to a million isn't the kind of premium anyone had in mind.

In fact, FYI, Humira costs 300% more in the U.S. than its price in the U.K and other parts of Europe and even Canada! :/

However, having said that, both pharma and insurance companies love "surprise" drugs that were initially placed behind others in class and thus offered a rebates at launch to compete, that end up performing better and take up more of a market share than anticipated - because they make both pharma and insurance companies millions - so they're not going to balk at price too much.

Now - insurance companies will tell you the more they can save and make, due to rebates, the lower your premiums will be as a result of "trickle down" - but we, as the consumers, have yet to see that ever happen, our premiums just continue to go up.

Now, some of the premium increases can be attributed to the fact that though insurance companies are saving us in some ways, these gains are offset by the ungodly cost of new drugs and healthcare in general - and yet not all raised premiums can be justified in that way.

And speaking of "trickle-down theory," I challenge anyone to find even one example of when "trickle-down" ever actually worked at a corporate or national level, for anyone but C-level executives and their shareholders, and at most, their corporate headquarters' local community?  LOL

In general, corporations confuse success with greed, and people are too greedy for trickle-down to work :/

Regardless, I'm wondering if the same dynamic that happened with Humira will happen with Alzheimer drugs - that the first in class won't be the best, but the ones that follow might get it right?

We shall see, it should be interesting  ... fasten your seatbelts, ladies and gentlemen, it's going to get bumpy and crazy for a while ... and once we do find an effective one, there will be a stampede lol.

PS - I just wanted to add, here, that considering there is a suspected genetic component to Alzheimer's, as well as an environmental one, I wonder if our best bet wouldn't actually be cell or gene therapy eventually, rather than a mab - or even both in conjunction?