The Serengeti Post Below Has Been Edited to Include This Personal Story ...

Edited - content added - I went ahead and added the story here, as well, including new content with a happier story about my grandmother's bucket list and "The Dorothy Doll" :)

Getting serious, for a second, on this one - so skip it, if it's not your thing.

So I wrote a post a couple of days ago, the inspiration for which was watching an episode of Serengeti and how elephants handle birth, death, family, and community VS. us supposedly more highly-evolved humans - but I just added a personal story to it about my grandmother.

I hope many will read it - because it's a situation that many have dealt with, or will have to deal with, when a loved one with cancer - who is of sound mind - either refuses further cancer treatment or refuses to undergo any cancer treatment at all.

Do you legally force them to undergo it or comply with their wishes, if they're of sound mind?

The answer isn't so simple, is it?

Some things aren't as black and white, as we Christians especially try to make them - there are gray areas that aren't specifically addressed by the bible, and they don't fit into neat little boxes.

But the truth remains - that despite what WE think, feel, and believe, and our best daily protests, the decision to choose no treatment/no more treatment and hospice care/certain death - choosing to die on their own terms and with dignity - is still ultimately their decision (if the person is of sound mind) - and so it should be.

For example, my 91-year-old grandmother with lung cancer could've had Cyberknife therapy to remove the small adenoma - but she refused.

Granny: "There's a 50% chance they puncture my lung and I'll be in pain breathless."


Me: "But Granny - if you DON'T get it, it will grow, and then there's a 100% chance you will DEFINITELY be breathless and in pain at some point?!?

I begged her. I pleaded with her. Daily.

When it grew, as we knew it would, she asked to have the surgery done then, but they told her it was too late :(

At that point, she chose hospice care rather than undergoing any sort of chemo or radiation treatment.

I realized at that point - "If this is the way she wants to go out, on her terms and with dignity, rather than chemo weakening and sickening her further, then she should have it, despite what I think."


But to this day, I ask myself: "Could and should I have legally forced my grandmother to have more treatment, or did I do the right thing abiding by her wishes?"

Not helping is when the rest of the family is nowhere around - so they blame you for not forcing more treatment :/
Then again, people want someone to blame, when someone dies, and they say insane stuff out of grief - especially in my family.
Stuff like "This is your fault, you wanted her to die" - which is, of course, absurd.
Because at that time, next to my daughter, not only did I love and trust my grandmother more than anyone else in this world, *but I had already signed off on the will/any right to her estate whatsoever early on, to prove my care for her was genuine.*
Or stuff like "You're irresponsible" or "I know you didn't do this, but you're a jinx, bad things happen when you're around."
If you ever experience this by family - - *and you're 100% sure it's not true and that you genuinely have tried your best, as primary caretaker (because some people genuinely don't), when the rest of the family was either scarce or nowhere around* ...
... try to remember that these things are often said not only out of wanting someone to blame and grief - but also out of their own projected guilt, for being too busy, too selfish, or too afraid, to get their asses there and deal with it, so they could conveniently have the excuse, and the audacity, to judge and blame you for everything   :/
Because the truth is - they weren't even there or around much at all, either because they admittedly couldn't deal with it or were "too busy," so they have no effing clue, though you tried to tell them, repeatedly lol.
And you know dang well that had I legally forced her, they would've said I was creating legal drama unnecessarily, while she was sick,  and forcing my will onto hers/trying to control her, so you're danged if you do, danged if you don't ;)
I was always the scapegoat when things went wrong in my family anyway, danged if I did, danged if I didn't - so I was somewhat used to it lol.
Like for my little sister using drugs, despite the fact that I never used drugs, except for trying weed in college, which I didn't like.  The microwave didn't work, the crops failed, you name it, it was my fault lol.  :)
It certainly doesn't help the situation of being primary caretaker OR your self-esteem, to say the least - and not a single one of them ever once said, "How can I help?"  - just dictated what they thought I should do, or chew me out for what they assumed I didn't do.
Half of you wonders if these people you once loved might be right about you, but the other half realizes they just want someone to blame out of their grief - and I'd become fairly used to it and I've got big enough shoulders to handle all that BS for the sake of honoring my grandmother's wishes :)

I figure God and my grandmother know the truth - and that's good enough for me - she chose not to have more treatment, and despite my daily protests, I realized it was ultimately her decision, how her life would end - on her own terms and with dignity - and I honored that decision.
If that's wrong, God and family forgive me, but that IS what she wanted and she never changed it.
I just wish she had been a little more forthcoming about that, and some other things, with the rest of the family, when some already were trying to blame me, before she died, but not only was she  always terrified of confrontation lifelong (except with me and my grandfather), but now she was sick, so she especially didn't want to argue with anyone - she had bigger things on her mind about her life ending - things done at her funeral and she wanted to accomplish before she died, rather than petty family squabbles  ;)
In fact, speaking of her lifelong fear of confrontation, when we had a discussion about things she wanted to do, I helped her make a "bucket list" - some items on the list were fun things she always wanted to do or have, but other things had things she always wanted to confront, but feared.


The first thing on her bucket list was having all of the Madame Alexander Wizard of Oz dolls that McDonald's was giving away with Happy Meals, at that time (2007) :) 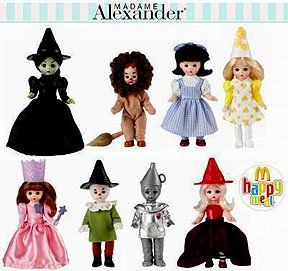 Don't you know, I ran all over the whole damn city of Lexington, visiting every McDonald's and buying about 5 Happy Meals a day, trying to get the whole collection for her lol.
The last one I couldn't get was Dorothy herself - even today, people selling the whole collection on Ebay are missing a Dorothy, she was hard to find.

Granny (wringing her hands, frantic) : "Where's Dorothy? WHERE IS DOROTHY? Why can't we get Dorothy? Please find Dorothy. Please. God, please help us find Dorothy, just do this one thing? Do whatever it takes, Chrystal - just find her."


Me: "I'm trying! Okay, Granny, sheesh, what is the big freakin' deal with finding Dorothy? I'm doing my best. "

Then I realized the reason she was so frantic about Dorothy - Dorothy was her ;)
So now, I'm like, "All right - who do I have to kill to get a Dorothy doll? ;)  lol.  I'll pay somebody whatever it takes, dammit! "
So I went to the local McDonald's manager, told them the situation, and the regional McDonald's put out an APB for a Dorothy doll, God love 'em.
As it turns out, one manager in Frankfort had held onto one personally, for her collection, and donated it to my grandmother for free - wasn't that awesome? :)
In fact, Granny, my little sister at her Easter visit, and I "played" with them all one day at the kitchen table, which we have on video.  (My daughter was at her Dad's for Easter Sunday, at that time :)
I'm not sure what happened to the dolls, because as I mentioned, I signed off my rights to everything, my older sister got everything - but I'm hoping she kept Dorothy, because it was so important to Granny - Dorothy WAS Granny.
Also on the list, she always wanted to confront the man that took full name credit for the hymn she wrote that was published in the Southern Baptist hymnal :(


I got his phone number at the new church where he worked -  and then she asked ME to confront him for her?!?
Nope - I refused -  because, as I told her, not only every time that I pushed past my social anxiety to confront somebody for her, did it get flipped back on me (and she sat back and acted like she never asked me to) -  but this was her work, she wrote the hymn, and it doesn't count on the bucket list if she didn't do it herself, there's no sense of accomplishment for her  - so if she wanted it confronted before she died, she needed to do it herself.
She got a little mad at me and tried to guilt trip me into it, but like I said, every time I've braved up past my social anxiety to confront someone when she asked me to, she sat back and acted like she didn't ask, and I'm left holding the bag of crap - AND - it was her bucket list - there's be no sense of accomplishment for her if she didn't do this herself ;)
But she got over it - however, I'm sorry to say, she was unable to bring herself to confront him  - she was that terrified of confrontation (except with me and my grandfather).

However, no worries about the things said to me by my family, during that time, and in general - since we unfortunately are NOT elephants, I've found my life is so much better, since I distanced myself from my toxic, extremely dysfunctional,  band-of-unevolved-chimps family, years ago :)
Because if you're the family scapegoat anyway,  family death or not - it's best to just walk away and let them think whatever, rather than continue to defend yourself, which always gets flipped back on you into "attacking" them anyway lol - plus your self-esteem will never improve in that environment.
I've forgiven them (though they never asked) - but I haven't forgotten, either, which is why I stay away, it's toxic for me.
So you take the good memories with you and leave the rest behind :)