Oh Ye of Little Faith That the Rural South Has Become a Trump Cult Haven for Paranoid Conspiracy Crazies ...

... still in disbelief as to what happened to us in Blowing Rock (for wearing masks in small, crowded boutiques), or that there was actually a Trump Store in Pigeon Forge (we passed it very quickly in our video when entering Pigeon Forge, two posts below) - here's a closeup of the outside (not my photo) ...

*** WARNING PARENTS***  - foul language and graphic images abound at the website, from which I've posted a few screenshots below, so scoot the kiddies away before viewing the website OR my screenshots first ;)

So ... here is what greets you on the very front page of the website ...

... which includes their merchandise ... 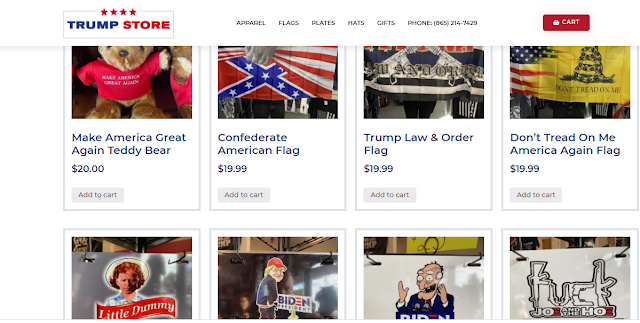 My favorite is the juxtaposition of the cute little "Make America Great Again" Teddy Bear with all the crude, rude, and lewd LOL!

What is that about, an attempt to like ...  try to soften the other nasties?

Hmm, not sure it's working.

In fact, do you let your kids view that website and shop in there?

Well, I guess you've got to start them on that hate and fear path of anyone not exactly like you early and all, as well as idolizing a wealthy CEO tax fraud and politician over Jesus.

All righty then, fellow "Christians" - pretty sure none of that can be found anywhere in scripture.

By the way, it's a woman owner - the below woman's niece (again, not my photo, it's from this local news site, though this picture has apparently since been removed, but you can still see her in the remaining photo there) ... 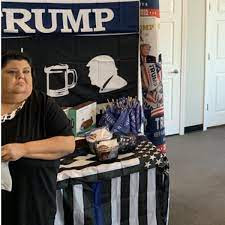 Doesn't she just look like the happiest, friendliest person in the world? ;)

Yeah, no - she looks very angry and like she could kill you with her bare hands lol.

But you keep on with your "right to freedom of speech" - how proud you must be (or will be, when you look back on all this insanity  and your choices someday) lol.

As for my liberal friends and family, you would think after everything we've seen from Trump and the Trumpets, over the last five years, nothing could still shock you - but hey, go to these towns yourselves and find out.

However, I would not recommend going to Blowing Rock at all, if you are black, Latino, Asian, Indian, Middle Eastern, Native American,  or anything but lily white.  We saw a total of one black person when we were there, with some white friends, looking very nervous - but no other races at all.

Even if you are white, for God sakes, whatever you do, don't wear a mask, even though Southern states are the least vaccinated and their COVID numbers are through the roof!

Now, the people of Pigeon Forge, on the other hand, were actually still really nice (though we didn't go in the store and meet the above "lady"), despite their odd choices.  It was only in Blowing Rock where people were rude because of our masks inside stores  - and these were people with vacation homes and money!

Well, like I said, we were warned (without saying why,  we were just told it had a different "vibe," but we quickly realized what they meant ;)

But also like I said, everyone else, everywhere we went were especially nice to tourists, happy to be back in business :)

We didn't have time for Asheville, this last trip, but looking forward to going by end of summer :)

Point being, again, the rural south has gone beyond idolatry for Trump, straight to cult territory, and still wants to storm the "communist" castle that is the capitol building, unable to accept Trump's loss.

Wasn't it just 4-1/2 years ago, like literally the day after Hillary lost, y'all were like, "Still crying - get over it, suck it up, Buttercup, you lost!"

We're on like 8 months now - so may I now offer the same mature, kind condolences to you? :)

So ... my second favorite thing about all of this is that they love to project onto us that we're brainwashed lol.

Oh, okay - but do you see any of us liberals/Democrats with a Hillary Store OR a Biden Store, calling anyone who didn't vote for Biden "DINOs," "UnAmerican" and "UnChristian?"

While asking these questions, it might be also worth it to ask yourselves, "Did Trump do anything that changed my life and this country for the better?" and the related "What did Trump actually do for me, besides get us riled up to fear and fight by constantly talking  and creating drama?"

Oh, oh, let me answer that!

Because your taxes were not less (unless you were a corporation or a wealthy tax evader), nothing "trickled down" economically on you from those record-high tax shelters for corporations or stock trades, and you are not making more money than before.

Also, any changes made at all - failed.

The partially built wall did not, in fact, protect us at all from the steady stream of undocumented from Mexico, nor did it protect us from terrorism (particular domestic terrorists already in this country), our country is more divided than ever, and your paranoia, anger, and hatred have reached maximum capacity, beyond the point of reason  - so I'm not sure if anything that did change is for the better, rather than worse.

Lastly, there's Christ and then there's Trump - no similarities at all - in fact, BIG difference   ;)