Doug O'Neill's and Hot-Rod Charlie's win today was just reversed, because the jockey, Flavien Prat,  in trying to close the gap, moved left too quickly, causing Midnight Bourbon to clip HRC's heels, causing him to trip and fall, throwing the rider, Paco Lopez, seriously injuring him (the horse appeared to stomp on him at least twice) :( 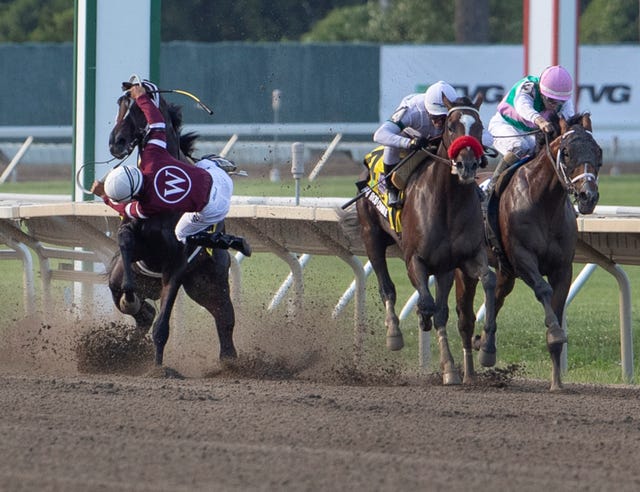 When initially interviewed, just after his win was announced (later reversed), Doug O'Neill didn't even want to talk about the win - he clearly was worried about Paco Lopez, stating the horse appeared okay, but he wasn't sure about Paco.

I'm so sorry, Doug - but what was Flavien thinking?!?

It didn't look intentional  - so the only thing we can figure is because of the new no-whip rule at Monmouth (meaning no whips allowed at all, which we strongly support, btw) - instead of using the whip to tap HRC on the shoulder to facilitate a left move, Flavien panicked and just jerked the reins left instead of a slow glide?

("Changing lanes" in horse-racing is legal, if done safely - but it's just like driving a car.  You have to give the other driver/rider enough space and glide left - NOT not jerk over and cut the driver/rider off ,  which is what Flavian clearly did :(.)

Regardless, we know it wasn't your fault, Doug - and you know we love you - but it was a very dangerous thing for Flavian to do, absolutely terrifying  - so we understand and support the disqualification - as I'm sure you do, too.

Prayers up for Paco Lopez ...

PS - Despite what it looked like, falling in front of the horse, Paco Lopez miraculously only had injuries to his knees and ankles, and Midnight Bourbon suffered no injuries at all.

Flavien Prat has apologized to Paco Lopez (as they are friends) - BUT - he added, as written that we suspected above, that the reason he jerked HRC over is because he was having difficulty getting him to move over without being able to use the crop/whip, so he jerked the reins (Bloodhorse):

"Yes, the lack of a crop came into play. I was trying to correct him as much as I could," Prat said. "If I could have hit him just one time left-handed, we would have been just fine, but it is what it is."

As we suspected, Flavien jerked the reins left, in a panic, trying to "change lanes" and close the gap quickly, without using the whip - but still not an excuse.

Look, people - I'm no horsewoman, Mark is the horseman -  and yet it appears you're going to have to get used to controlling your horses without using the whip, perhaps using natural horsemanship techniques -  and if you don't already know any Parelli natural horsemanship techniques, you better learn them, and fast - because the no-whip rule is the wave of the future and we applaud it, as did former jockey, Jerry Bailey, before the race yesterday (who always tried to hit his boots with the crop, for the effect of motion/sound to affect the horse, instead of hitting the horse).
For too long, you've grabbed for that whip to control the horse, just because it's there and easier, rather than employing other techniques first.
I understand natural horsemanship techniques will be difficult.  You're only on these horses for short periods of time, so it's difficult to bond.  Also, you're not able to use your heels to apply pressure, because of the stirrups position.
Perhaps someone can invent a soft instrument to give a soft press to the shoulder help indicate to the horse where to move, without hurting him, but until then, at least take full Parelli training to learn more natural techniques?
Plus it's actually a better and more natural race without them, proving the horse's natural ability, and that just are running and win because they want to - NOT because you're hitting them.


Otherwise, I just feel so sorry for Doug O'Neill - he's an extremely compassionate, heart-on-his-sleeve guy, this was not his fault - and apparently, nobody can reach him for comment -  not press, not the owner, not the jockey - that's probably wise, actually, but still worries me.

He texted Mark earlier in the week with some pictures of both HRC and Lava Man, and Mark texted him right after the race, but nothing.

I know you and Mark text, but just in case you Google and ever land here, as well, just know that we love you, we think we know your heart, and we're so sorry about the string of bad things that have happened to you, most of which are due to the choices made by the people around you, rather than you.

You're an excellent trainer, you really are, the horse-racing world needs people like you.

So take the time you need, make adjustments  (perhaps incorporating Parelli natural techniques?), but please keep on, keeping on - we're with you in spirit.