The Battle Hymn of the Republic :) (And God is Sovereign, Not Trump, Paula)


... I added this video to the post below, but in case you miss it, here it is again - so that you can see that it's not fake news, it's not twisted words, and I didn't make this up - that is exactly what Trump's White House Spiritual Advisor, Paula White, actually said.

Just in case there was any doubt of the cult mentality of Trump supporters ...


... note that in addition to "declaring" that any "satanic pregnancies to end in miscarriage" (which she has stated is a metaphor for people who carrying forth plans against our president, which only made it worse) - note she also "claims authority over and comes against the marine life kingdom and the animal kingdom (whaaa?)" and "commands any strange winds sent by those who sin against our president to fail" in this "prayer."

Again - this woman who clearly suffers from severe mental illness - is our official White House Spiritual Advisor to the President (Trump).

Unfortunately, she is the first female Christian pastor in the white house - despite the fact that just about any other Christian woman I can think of would be a better one.

I'm embarrassed as a woman, as a Christian, and as an American  - because most American Christian women do not act like that! :(

See, this is why I "went atheist" for a while, before being confirmed in the Episcopal church in 2007 - I grew up in an evangelical church and family, like this, and that was one of my many issues with them - they talked about the evil power of Satan more than the love power of Christ, and their "prayers" like this sent chills down my spine - because they don't sound like prayers, they sound like curses/hexes themselves on other people.

I mean, listen to how panicked, frantic, desperate, and hateful she and her little coven sound?

And why is she making God's creation sound evil, with all that "satanic wombs, marine and animal kingdoms" stuff?

Oh, and don't forget, Paula - your "prayer" was also to shut down any "Jezebel practicing witchcraft" as well as "those who harm the church"  - so God could actually oblige your prayer, but  careful what you wish for - it may mean the end of your little coven - erm - I mean company, you've got going there, Jezebel ;)

And I've heard it said that hexes/incantations/prayers for others failures are said to come back on those that make them 3-fold or 7-fold, too, so there's that, too.

Regardless, God's truth marches on and it his will that will eventually be done - regardless of political schemes or temporary wins and losses.

It is God - the creator, intelligent designer, and original energy source of the universe - who is sovereign.

Not Trump, not Republicans or Democrats, not people that call themselves witches, satanists, prophets, or televangelists imagining they can exert control over creation itself, regardless of their prayers, incantations, hexes, and/or curses or whatever label they attach to them :)

As for me - again - I will continue do as Christ actually commanded and continue to:

(Matthew 5:44-47) 'Bless those who curse us, do good unto those who hate us, and pray for those who despitefully use us."

Did Christ say: "Curse/hex your enemies back, and wish ill and failure upon them?"

Did Christ say:  "Despite declaring all life formed in wombs sacred and innocent, use a metaphor that makes it sound like there's even such a thing as satanic wombs and spawn of Satan, meaning Democrats (many of whom ARE Christians) and others who can Trump for what he is?"

In fact, he's pretty clear what you're supposed to do, and there is no scriptural support for praying against anyone, for ill will or failure to come upon them  (which is, by definition, a curse/hex) - except the Old Testament - and Christ specifically repudiates it - also in Matthew 5, verses 38-43.

Note Christ also says  in Matthew 5, verse 46:  "For if ye love them which love you, what reward have ye? do not even the publicans the same?"

I find it interesting that Trump only loves his neighbors if they love him - particularly buxom "neighbors" with bleached-blonde hair, who'd do anything for money, like Paula, Kellyanne, and Stormy, calling them things like "advisors" and "counselors" ;)

That's "publicans" for ya - do exactly the opposite of what Christ said, in Christ's name, and incredibly accuse everyone else of not being Christian or even Satanic lol.
Regardless, I digress, back to my point ...

This isn't Satanic attack, Paula - this is finally being held accountable for one's choices and actions in natural consequence - including your supporting into power the most corrupt, immoral, dishonest, belligerent representative for Christianity and country you could find, despite having better options - so stop blaming Satan and start taking responsibility!

So again, I say, "God bless you, Paula - I pray for God's blessings upon your life and that your soul finds peace, the peace that passes all understanding that Paul mentions in Philippians 4:7" :)

Not to mention, the only "neighbors" Otherwise, I think I'll be singing the Battle Hymn of the Republic all day, written by fellow Episcopalian sister and abolitionist, Julia Ward Howe 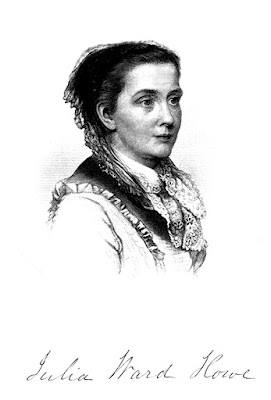 - because regardless of how this impeachment thing in, ultimately it is God's truth that will prevail :)

It took 5 long years to win the Civil War, this is nothing.  Some say we're still fighting it.

The truth is, we have made some gains - ending slavery, voting rights for African-Americans, ending segregation.

So it's just we've a major douchebag in the White House, fanning those flames again, under a false flag of Christianity - he will not succeed, in the end, just as Jefferson Davis didn't.

And don't forget ... Jefferson Davis ran away from office in a dress to try to avoid capture and accountability, so Trump's little smoke screen to evade consequence is nothing in comparison :) 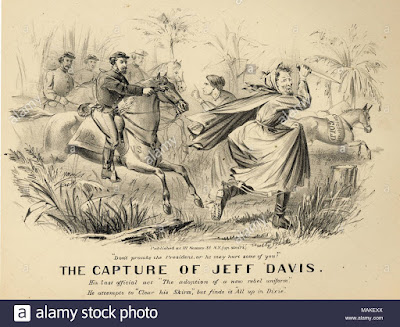 Regardless, give it up for my girl, Julia, and the Republic that is the United States :)

He is trampling out the vintage where the grapes of wrath are stored.

He has loosed the fateful lightning of his terrible swift sword, his truth is marching on!

Glory, glory, Hallelujah - his truth is marching on!