I'm seeing nothing at the WaPo but more "Kobe Bryant, the Jump-Shot Hero" and "Kobe Bryant, Great Dad" articles and opinion posts, this morning.

You know, I'm really glad Kobe ended up having girls himself -  if anything taught him a lesson, it was that.

Because if someone had done what he did to that girl, to his girls?

They'd not just go to jail - they'd no longer have any genitals to speak of.

And I'm truly sorry he, his daughter, and many others tragically lost their lives.

I'm also a basketball fan - I went to University of Kentucky, for goodness sakes, how can I not be?  lol

So, I get how talented on the court Kobe really was - and yet that's not his complete life story/history.

Perhaps if he had come out later and said, "I did this and lied about it at first, until the medical examination evidence was released - then I, my team owners, and the NBA paid my way out of it so I could still play.  But I never go a day without thinking about what I did, I will carry the guilt of what I did for life. I realize how lucky I was and I am grateful.  Since then, I've had daughters and I realize what life is like for them, how unsafe the world is with men like I used to be.  So I vowed to do better, never did it again, and will stand up for/protect women any chance I get," rather than leaving it at that awkward semi-confession ...

He, and we, just moved on and pretended it didn't happen.

In fact, I know for a fact that I'm not alone when I say this, from both men and women - after the initial shock and sorrow for the situation, for whatever reason, that shady-handled rape situation, despite the evidence,  was the very next thing that popped into my head upon learning of his death.

And let me tell you something -  after the evidence is comes back proving them responsible - every single rapist says "It was consensual, we just had rough sex"

Escaping consequence for his prior actions in the first place, whitewashing his past, pretending the rape didn't happen,WaPo pretending they didn't suspend a reporter who mentioned it (and failing to properly protect/support that reporter when she received death threats after her home address was published) and quietly reinstating her?

It helps no one but the rapist and rapist wannabes.

This was a travesty of justice and shouldn't have happened - including what happened to the journalist that mentioned it - not to mention the the height of hypocrisy after WaPo was on the forefront of reporting #MeToo accusations.

It's okay to admire people, but when a negative truth is staring you right in the face - with factual evidence, not circumstantial speculation  - i.e., the victim's blood all over their T-shirt)?

Time to wake up and take them down off that pedestal a bit - it doesn't matter if it's Kobe or Trump or Hillary or even Oprah, for goodness sake - insert name here.

You're enabling bad behavior to continue, which is harmful to others, to that person, and all those wannabes who admire that person - you are helping no one by suppressing truth.

Now, of course, as a result, we're back to all the "She didn't testify which means she was lying" - despite her blood all over Kobe's shirt???

Once again - most women know that they will have go through what Christine Blasey-Ford did if they do - worse, because it was even greater beloved Kobe Bryant.

Most women are not willing to put themselves through that, especially immediately after trauma.

It takes tremendous bravery to do so, especially against a popular celebrity - let's not forget the death threats that come.

Look at what reporter Felicia Sonmez is going through, just for posting a link to the medical examiner's rape evidence?

For those who don't know, not only was she was suspended from work (now resinstated), but her home address was published, and she's currently living in a hotel after receiving death threats, as we speak!

And you wonder why most rape victims drop the case/don't testify, especially against high-profile people, right after their trauma?


"Hey, Kobe got away with it, maybe I can too - all I have to do is be exceptionally charming, have money, a killer jump shot, support the coolest politics and hang out with their wealthiest donors."


"Then, I'll hire the right PR people to advise me to do things like visit sick kids at the hospital and charm all the late night talk show hosts and the next thing ya know, I'm a saint - and boom, no ones believes her. A reporter's living in a hotel receiving death threats just for mentioning it."

"Conservatives have successfully reconvinced America that all women are lying and all rape allegations are false, based on exactly TWO high-profile false-rape allegations, as well as old statistics that admittedly did not include lack of full investigations or women who failed to testify due to threats/fear."

Therefore, I signed up for the full NYT yesterday, ready to cancel WaPo if they didn't reinstate her.

They did reinstate Felicia, but said nothing themselves about it - I had to read about it at the Times - and we're still all about Kobe hero worship at the WaPo.

I'm not a huge Bezos fan anyway - he is the least charitable member of the wealthiest 1% there is and a jackass of a boss, by all accounts.

So, Bye Bye, Bezos and The Post - Democracy does die in darkness - learn to not just talk the talk, but walk the walk. Don't just write it, live it - like Felicia does.

I called them, stating exactly why.  I wasn't angry or emotional, I was very matter of fact; in fact, super nice to the CSR (heck, it's not their fault lol) - but my reason didn't exactly fit in any of the little checkbox "bubble" reasons they give as reasons to cancel lol.

I still have Amazon, though - dammit lol.  I have a love/hate relationship with Amazon  lol - but they make things so easy for busy people, I can't help myself! lol.

I hate to cancel WaPo, only because Felicia herself is still there, so though I left a comment for her yesterday and wrote her an email, let me say this publicly now ... 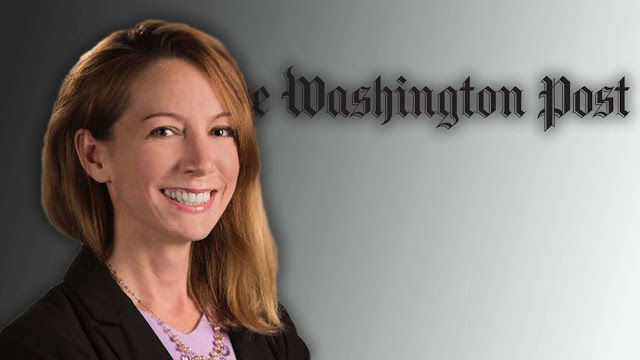 Thank you, Felicia Somnez - you're the bravest person of the year, perhaps the decade - thank you for not just talking the talk, but walking the walk - I'm sorry your employer couldn't do the same.

I hope as time passes, people will begin to realize how brave you really were.

If the NYT now offers you a job - take it! We'll welcome you there :)