Rare American White Pelican Sighting at Our Central Kentucky Park, Plus Guess Which Animal Made These Snow Tracks? :)

So the other day, Mark calls me on his way to the barn, saying that he saw a large white bird on the park's lake.  Thinking it was a snowy egret or a swan, he pulled into the park to get a closer look.

Nope, something even more rare in Central Kentucky - an American White Pelican! 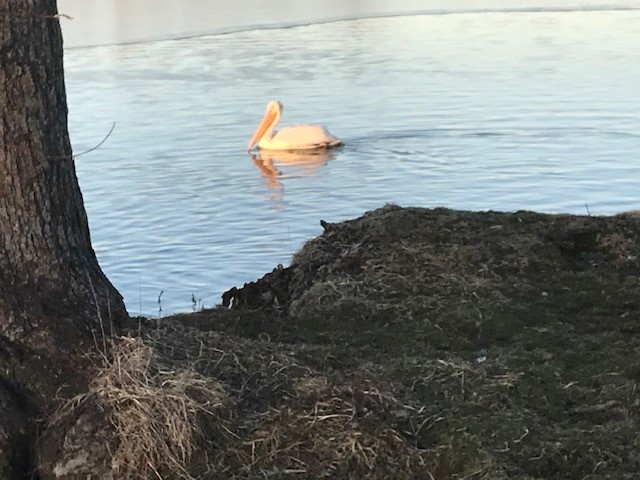 You have no idea how rare that is, in this part of the country!

Mark even got a small video of him ...

Apparently, other people with professional cameras snapped this sighting, which you can see HERE.

This sighting is extremely rare, as they've only been in Kentucky for the past 20 years (climate change), but mostly in Western Kentucky at Lake Barkley - rarely seen more East than that.

As opposed to most pelicans in America, the American White Pelican is a freshwater feeder rather than saltwater, and does not dive for their pray, they fish while swimming :)

So being that I have been uncharacteristically busy with work, this month, when it's usually a dead time of year - we planned on going to find him at the park today.

However, we had a snowfall last night, making it harder to see the white pelican - plus it was only 6 degrees this morning!

Nevertheless, we were not deterred - we bundled up and went out at 8 a.m., but were unable to find him :(

In fact, most of the lack was frozen over, and even most of the ducks and Canadian geese hadn't come out from their warm boxes and nests yet.

We were, however, able to capture a few pics of other lake residents, the few that were out ... 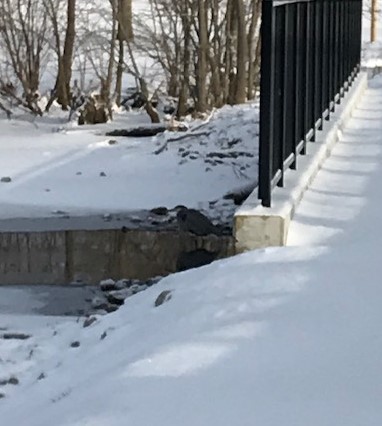 Like Prince Harry the Heron, who presides over the lake, resting by the drainpipe from the creek to the lake - one of only two areas that weren't frozen completely :)

Unfortunately,  even though I wasn't very close and walked very slowly,  my approach still disturbed him he flew away :( 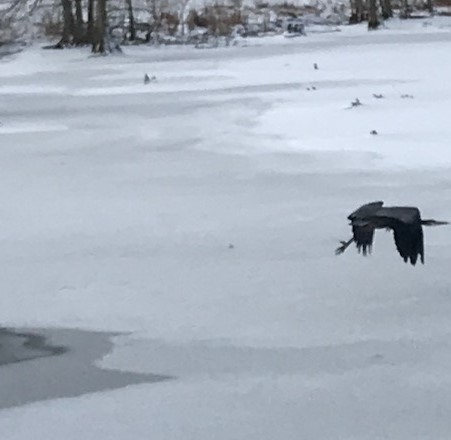 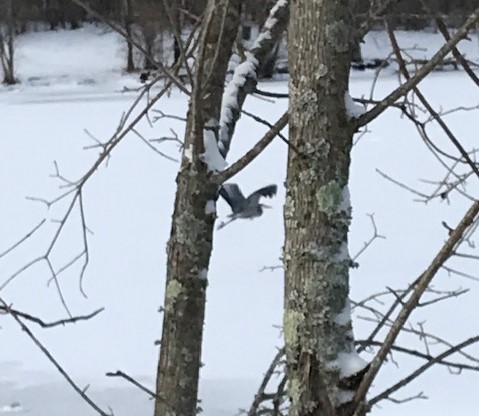 Also, just the few ducks that had braved the cold out yet, this morning :) 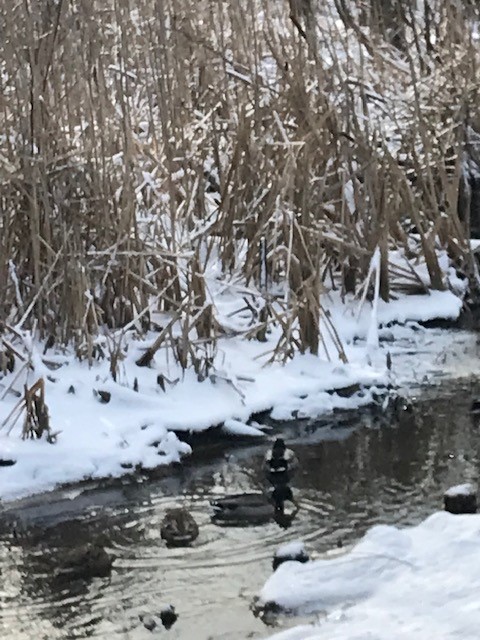 And just a pretty little winter scene of the wooded creek area ... 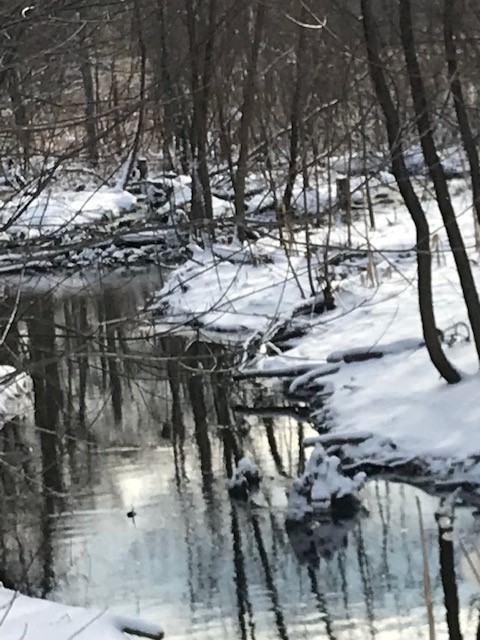 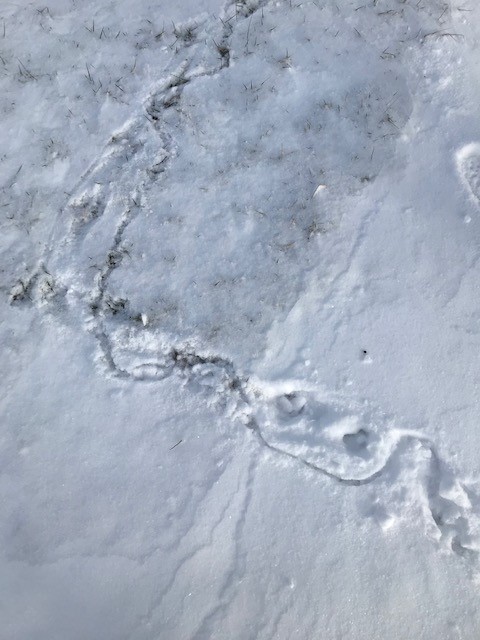 Whatever it was, it looks to have either slithered like a snake - BUT ... 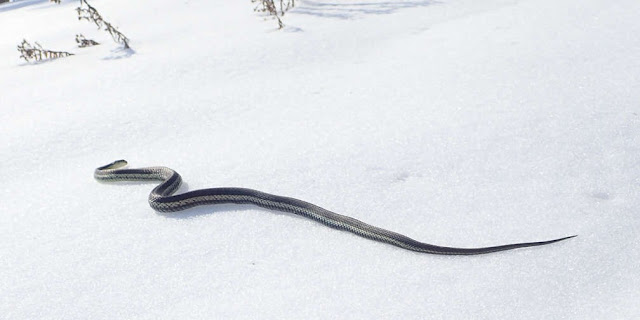 If you look closely, there also appear to be small footprints on either side of the slither? (The larger footprints are obviously ours.)

Though not unheard of for snakes to venture out in winter, they're typically hibernating.

So our best guess was a possum -  with it's bare, wiry tail, dragging behind it? 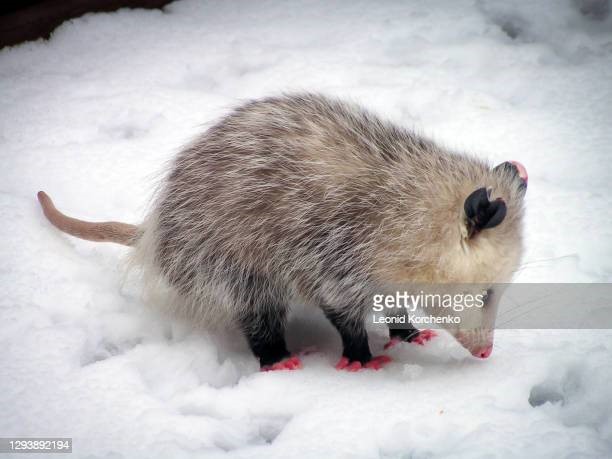 Whatever it was, the tracks led here ... 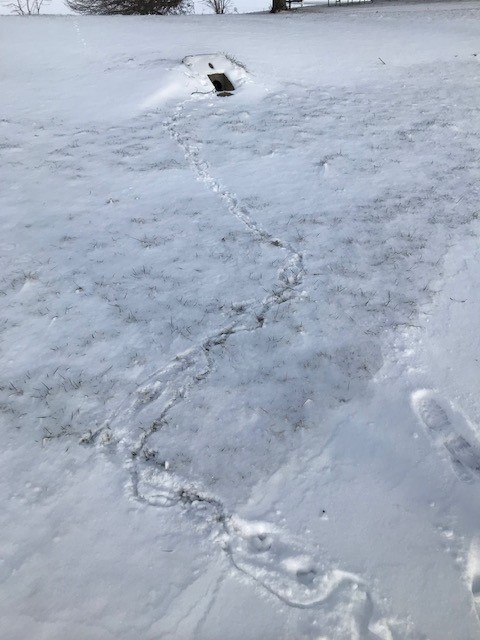 ... and neither of us were about to dig around in there and find out! lol.

We had decided on a possum, yes?

Then we got home, we looked up tracks left by snakes and possums on the net.

So here's a pic of snake tracks in the snow, but they're made by a large snake ... 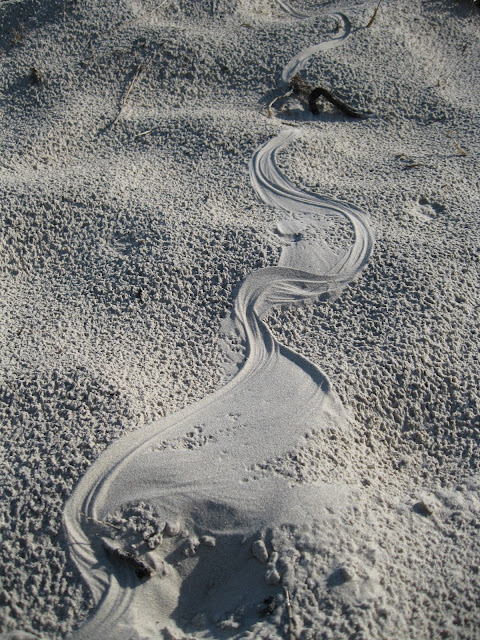 And here's a pic of possum tracks ... 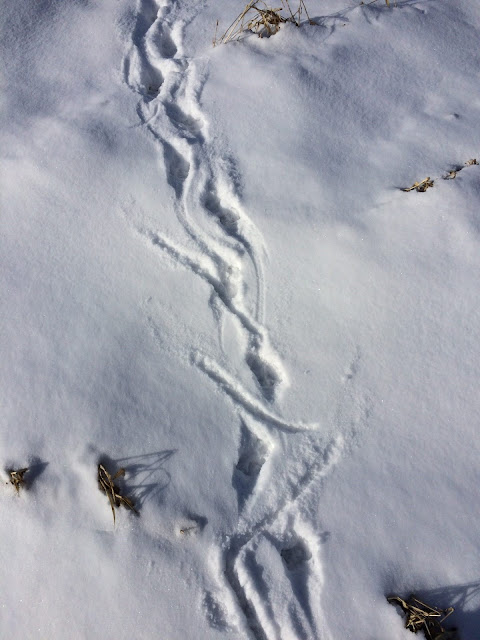 Though neither perfectly fit, I'm thinking they more closely fits a possum, considering there are what looks like small snow-covered footprints next the trail?

Then again, the tracks made by a possum tail aren't in one, long continuous, S-curve slither, either, like the tracks we saw.

Perhaps its tail dragged more than usual or it was injured?

Maybe it was a possum with a snake in it's mouth? ;) lol

We'll go back later, when it warms up, and see if we can find Pelly :)