Interestingly, much like the Mayans, the Chinese years are based on a lunar calendar, as well as come in cycles -  history repeats itself in 12 or 60-year cycles (Mayans are 80 years).

My husband has just informed me that this is his year, because it's the Year of the Tiger, and he was born in a Tiger year. 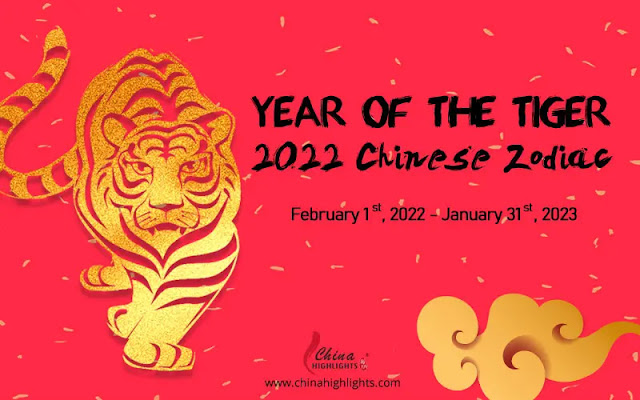 Allllllrighty.  I shall brace myself ;)

He told me this because his coworker, originally from China, asked him what his Chinese birth sign was, then asked what mine was.

To which my husband responded ...

S thought this hilarious, mind you, that he stated that, like that - because apparently, in Chinese, you don't say you are the animal -  you always say the animal with year included.

And it could be worse - I could've been born in the Year of the Pig, and then he'd say, "My wife is a pig."

Anyway, what is The Year of the Tiger about? 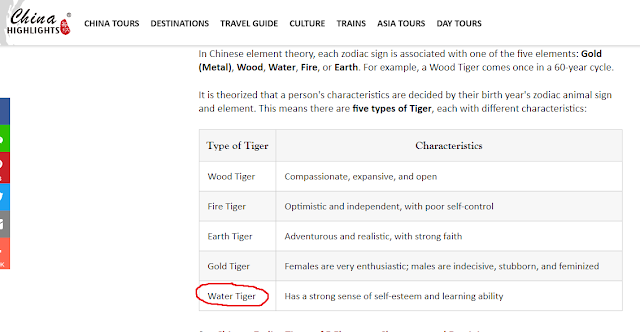 Because I wouldn't say he's unpredictable or irritable (I was previously married to ... that ... and no, thank you) - or that he has poor self-control (unless he's mad) - he's pretty even-keeled and cheerful.

I also wouldn't say he's materialistic, we have that in common - we're almost anti-materialism - we'd rather spend money on things we enjoy doing together (or in my case, charity).

He used to be, when much younger, but that was a few decades, life experiences, and a very materialistic ex-wife ago.

He is quick to judgment, though, and never second guesses it (much to my frustration lol).

Here's a little video explaining the Chinese mythology around the tiger ...

Unfortunately, what my husband did not know is that actually "your year " is supposedly an unlucky year for those previously born to those years - or at least more challenges to overcome - but we'll just pretend that's not true, because my Tiger husband would pretend that's not true anyway - it's his year, dammit - and no one will be allowed to forget it! ;)

In case you're curious, here's supposedly me, the monkey ...

Hahaha!  Like I needed this to tell me I can be naughty/mischievous ;)

And the specific, an earth monkey ... 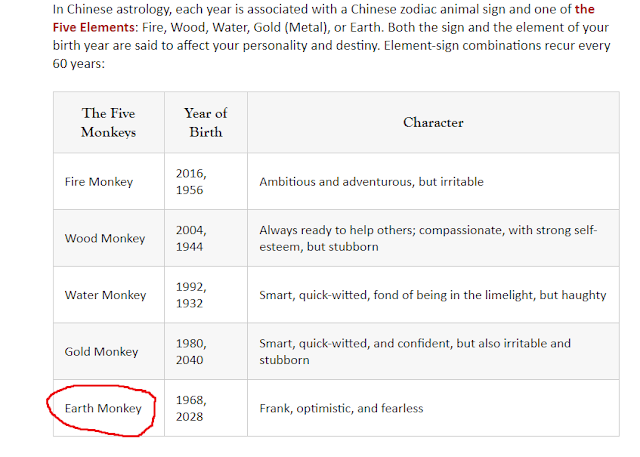 I cannot objectively view myself, of course, but I actually like rural and urban equally?

In fact, my 2 biggest fears are judgement/being humiliated (especially publicly) and hurting others' feelings (I almost never intentionally want to hurt anyone, unless they're continually hurting others or me).

Then again, what is true, is after I perceive too much BS -  or too much bullying of others or myself (typically easier with others than myself) - I will cut through the BS butter with the equivalent of a machete, instead of a proper BS butter knife lol -  and can verbally skewer bullies - so yeah, I can be pretty direct/frank/bold with people, even harsh, even if they don't like it - I just worry I've hurt them later, even though perhaps I shouldn't, if truth lol.

I also hate - and I do mean hate - being the center of attention - I'm very uncomfortable with it (which is why I quietly blog "in the corner" to practice/keep up my writing skills).

As a matter of fact, if I'm trying to tell a story "live," and I realize all eyes are on me, I'll forget what I was saying, every time lol.

I like making people laugh, though, making them feel welcome and comfortable -  but I don't like being at the center for it.

My sense of humor is pretty naughty, mischievous, and "eccentric," though, that's true (without being cruel) lol.

I also am definitely not materialistic - I don't even wear a diamond wedding ring (I think mine cost about $25 bucks), nor do I feel one is necessary - as I said, Mark and I actually have that in common, almost anti-materialism (and me, with wanting to give to charity, which can sometimes drive him nuts lol).

(If I did have one, it'd be more about the artwork in the band, not the diamond - but there's plenty of other things to spend our money on first ;).

We like to look nice, yes, but we'd rather be comfortable, and there's other things we'd rather spend our money on that we enjoy together :)

And I wouldn't say opportunistic, I'd say resourceful, I had to be - but with integrity/principles  (though some people don't believe my true motivation was exactly what I said it was:)

I guess these variations also depend on which element sign the tiger  and monkey were born under (water, fire, wood, gold), plus your rising sign for the day we were born - and of course, the strong possibility these characteristics could describe just about anyone and are therefore mostly BS  ;)