So I knew that poppies for opium for opioid-based pharmaceuticals were grown mostly somewhere in the Middle East and Southeast Asia, I just didn't know exactly where - but Ozark tells you - and it's true.

Did you know that  poppies for opioid-based pharmaceuticals are grown to a certain degree in Tasmania -  but primarily in Afghanistan? 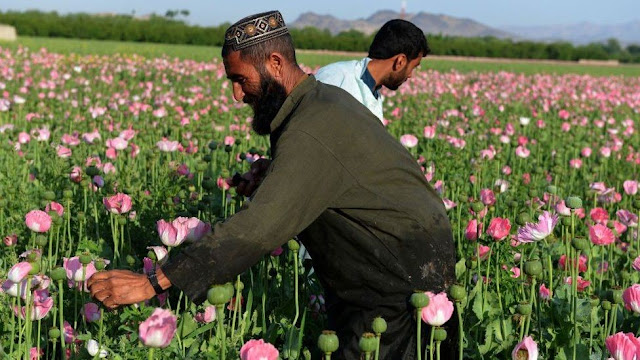 I tried to avoid most press releases for political bias, with the exception of the White House Archives during the Obama administration - but you're welcome to find your own source -  but you will note that all political sources, left or right, will tell you the same.

Legal poppies for opioid-based pharmaceuticals used to be mostly  grown Southeast Asia in the "Golden Triangle," and Afghanistan's supply was illegal and processed into street heroin.

However, since the late 1990s, now Tasmania and Afghanistan are the world's top producers of legal opium for pharmaceuticals.

The justification of legalizing these two locations in the 1990s and 2000s was to push it towards pharmaceuticals and get it off the streets in heroin form.

HOWEVER - Afghanistan, in particular, still tends to do both -  sell it to pharmaceutical companies for legal opioids AND sells it on the street for heroin - and the Taliban wants to control it all and keep doing this.

And yet we curiously only focused on Tasmania's opium during the opioid crisis, for supplying the distinct type of heroin for OxyContin, - despite the fact that at least Tasmania isn't also selling it directly on the street in the form of heroin -  unlike Afghanistan, who still does both  - isn't that odd?

Now - does the strange, 180 opinion from Republicans, changing from "all Muslims are evil" to "Poor Afghanis" and the "atrocities" committed in Afghanistan -  as justification for continued military involvement there -  make more sense to you?

It should - because this has never been a bout faith, that's just an emotional manipulation used to sway public sentiment - this has always been about oil - and opium.

Because Afghanistan is the leading producer for legal opium for U.S. opioid-based pharmaceuticals there, too ;) 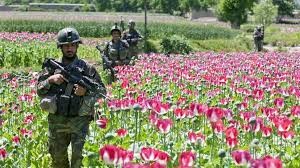 The U.S. government never seems to care about atrocities committed by China towards pacifist Buddhist monks in Tibet or atrocities committed under apartheid in South Africa, regardless of Democrats or Republicans being in charge - just but don't mess with our oil or our opium - but especially Republican politicians ;)
(European jewelers cared a bit more than we did about South Africa, because of the diamonds there, but the U.S. economy is driven more by oil and pharmaceuticals.)
Now, you may be saying to yourself, "Why don't we just legally grow it in some locations here?"
Well, then we'd have to take direct responsibility for the opioid crisis, now, wouldn't we? ;)
By Chrysalis at January 22, 2022