We're Okay - But At Least 50 Dead in Western Kentucky, Toll Expected to Climb, After Tornado Outbreak

We had a tornado outbreak, last night, hitting Western Kentucky the hardest - at least 50 have been counted dead thus far (and it's only 7:30 a.m.) - these are just the initial images coming in ... 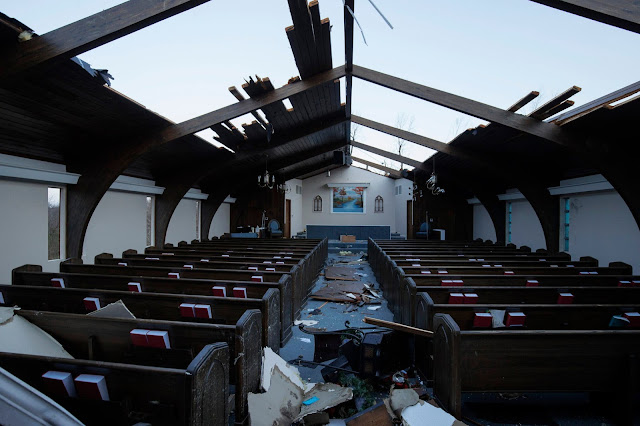 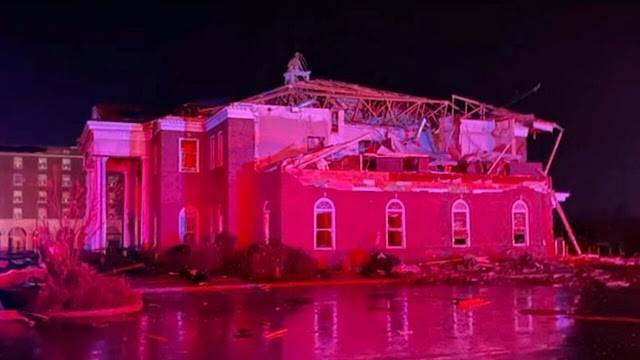 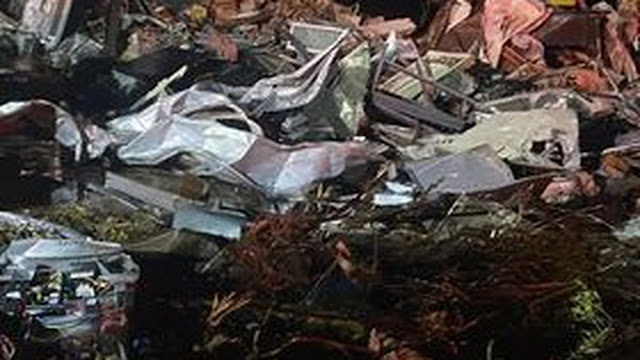 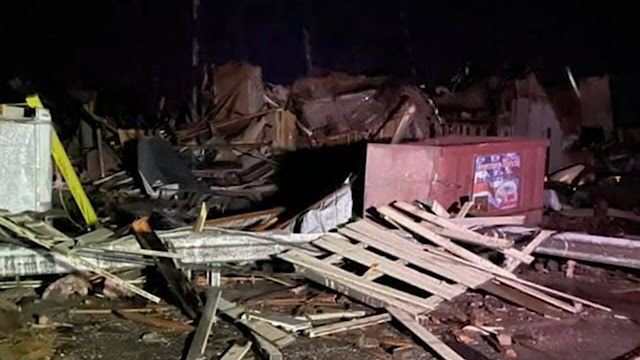 For those not living in this part of the U.S. (or the U.S. at all), we call it a tornado "outbreak" when several tornadoes within the same weather front touch down, simultaneously or minutes to hours apart.

Yes, it's extremely unusual, this time of the year -  tornadoes usually come in March, April, May, and sometimes June, here, when a warm front mixes with the sitting cold front -  but we've had a couple of tornado incidents in December and even January the past 15 years or so, due to the volatile weather patterns that accompany climate change - this being the worst.

Governor Beshear has declared a state of emergency and said this is the worst tornado hit on record, but I'm not sure - the tornado outbreak in 1974 was memorably horrific, 23 tornadoes - 8 of them F5 ripped through Ohio, Indiana, Illinois, Kentucky, Tennessee.

I remember even as a 5-year-old in suburban Cincinnati, that outbreak on April 1-2, 1974 - who could forget? Just when you thought it was over, the sirens went off again, all evening and night, and it was the first time I actually saw a tornado (I've seen three in my life, two from a distance).  I remember the sky being the weirdest shade of black I've ever seen, then would lighten to a weird yellow-green, then back again.

Perhaps he means all the states affected, and/or despite the advanced - warning technology we have now? Also that the death toll is expected to climb in all states effected - these are the worst at night, because they hit when people are sleeping :(

We have a few branches down (and I took my Christmas decorations inside in prep), but still have power, so that's all.

This is so sad for those people just before Christmas, prayers up for their families :(

Just an addition here, it's amazing the memories an event like this brings up - I actually remember much about that 1974 outbreak very clearly, even though I was only 5-1/2 years old.

I remember my dad picking me up from preschool in his business suit from work, wondering why it was my dad instead of my mom, and thinking either way, they were late, because the sky was almost black, I thought it was night, but it was only about 3 p.m. lol.

This was, in fact, one of the only memories of my childhood where my dad actually behaved as a dad should, which is probably part of the reason I remember it so vividly.

I thought something was wrong with mom, that perhaps they'd fought and he'd hurt her again, but my Dad reassured that she was fine, he just left work early "due to the weather."

He seemed tense in the car, though he tried lame Dad jokes and his fake laugh.  He took us through Frisch's Big Boy first, which is one of the reasons I still love it to this day - comfort food ;)

When we got home, my mom and older sister had hail in a bowl, trying to preserve it in the freezer, due to the size (about the size of golf balls), thinking it was cool.

The sirens went off and we went to the basement family room, for a while, no big deal - the howling wind got loud, but then we thought it was over.

I went out to ride my tricycle in the driveway, while my dad inspected a downed part of our fence.  It was sunny, looking like a normal afternoon.

Then the sirens went off again.

My Dad told me to go in the house, and he and my sister went to the top of the hill in the road, then came back and said they saw it, they could see trash can lids flying up in a nearby neighborhood.

Down to the basement we go again.

Sirens stop, out we come, and it's now a weird yellow-green color outside.

I go to turn on the TV in the living room upstairs, but we have no power and the phone lines are dead.

Oh well, I'm playing with toys in the floor, when my dad suddenly yells "Get downstairs NOW!  GO!"

Then he picks my sister and I up in an arm in a football carry, drops us on the stairs, when I stop to turn around, he literally pushes me down the stairs "Go! GO! MOVE! Get down the fucking stairs, run to the closet!"

I had never in my life, before or since, seen my father scared, or at least visibly seen his fear - but he definitely was that day.

Our basement was a walkout, which meant part of it was underground, and the closet was in the underground area.

I remember being the first one to the closet, and debating whether I wanted to get in -  because to a 5-year-old, which is worse?

Something called a tornado, you'd never heard of or seen before, or sitting in spider webs, with a bunch of nasty spiders? lol

I chose the latter, because my parents seemed more scared of the tornado than spiders, but they nevertheless stayed just outside the closet, wanting to see what my Dad had seen that scared him so badly.

Then a sound like a steam train -  or more like a train whistle screaming - or actually both - a combination of a roaring rumble and screaming whistle - louder than the now-blaring siren - sometimes accompanied by electrical snaps and pops, either from snapping power lines and transformers blowing, or the "blue" lightning often found in and around a tornado itself.

(FYI, the "blue lightning" surrounding and within a tornado is caused by stimulated nitrogen electrons in the environment, now rapidly dropping back down to their original energy state).

Regardless, you'll never forget the distinctive sound of a tornado, once you hear it.

I peeked around the door, just in time to catch a glimpse of a white-grey whirl of chaos sweeping our apple tree through our basement-door window, and my sister and mom turning back to the closet, their faces in abject terror - I've never seen that look on them, before or since.

Then all climbing in - sitting in the dark, on each other's laps, atop paint cans and amongst spider webs, waiting for it to pass.

When it did, we all - including my Dad, whom I'd never seen pray before - thanked God for sparing us.

(As my dad later explained, "Well?  There are no atheists in foxholes.  Given the right situation, everyone will reach up for God.  Doesn't mean he'll answer.  Yes, I believe in God, just not in a obsessed way, like your mother.")

Though they both had their severe issues - fair enough.

Personally, as an adult, I no longer believe that God either spares nor  targets us, in such situations, except perhaps in rare events with special people for a specific purpose.

In fact, I don't think God has anything to do with these things at all.

At most, perhaps he gives little "winks" to let us know he saw it and he's right there with us, as we experience them -  if we look in the right places?

Regardless, only the apple tree was down and a few shingles.

This pattern went on all night - quiet and still, exhale, sirens, basement, lightning, thunder and howling wind -  at least 5 or 6 times.

We finally ended up just staying in the basement all night, no power, no phone.

I remember I began to cry and panic after a while, thinking this would never end.

So my Dad picked up the dead phone in the basement family room and began talking in silly voices, pretending to be talking to President Ford and Walter Kronkite lol.

He was successful in making me laugh :)

I remember thinking that I'd never seen this Dad -  the funny one, the protective one - this must've been what initially drew my mom to him - where had he been, and why wasn't he like this all of the time?

I remember having nightmares for a while afterwards, which passed over time, but still, for a few years afterwards, if there was even a Tornado watch - meaning conditions are right for a tornado -  versus a warning - meaning a funnel cloud or tornado has been spotted/picked up on radar, touched down or not -  my family would try to hide it when telling each other like, "There's a T watch" or "There's a watch on."

I figured that out pretty quickly, though, saying "I know what that means!!!" then promptly freaked out, ran to the basement to the closet with pillows over my head, even if just a watch rather than a warning lol

In fact, to this day, if I'm particularly worried about something, particularly with regards to family, I will still dream of tornadoes.

Over time, however, I developed a sort of fascination with them, kind of a love/hate relationship with them -  I think because I wanted to overcome my fear and actually see one again, in order to confront my fear, and in effort to better understand them, in order  to feel less afraid - "It's only weather science, after all," I thought.

And I will say, having been through both tornadoes and hurricanes now, I'd take a hurricane over a tornado, any day, mostly because of the advanced warning several days in advance as opposed to tornadoes  (though I didn't know tornadoes could spin out of Hurricanes them until I moved to Florida ;)

And when I think about it, my family kind of was like a tornado outbreak anyway, all the time lol.

Everything looks normal and seems fine, then out of nowhere, either someone hits or there's some other whirl of chaos crazy, randomly and out of nowhere, and there are no sirens to alert you it's coming :/

But on that day, at least, everyone did and acted as they were supposed to, as a family, and for that I'm grateful :)

And I have since mostly abandoned my fascination/fear of tornadoes - because despite it being weather science, we still don't fully understand tornadoes -  they're erratic, illogical, and random, leaving one house destroyed and the house right next door unscathed -  and we don't know why and perhaps never will.

Even if we did, would it change anything?

No - because even if we better understand a tornado's "behavior," we still couldn't prevent them, reason with them, nor ask them to spare us.

They are what they are - random chaos.

I think we have a hard time, both believing in and accepting - randomness - as human beings.

We like causes, we like explanations, and we often try to find someone or something to blame, including God, or even the victims themselves for not being prepared or keeping themselves safe enough.

But the truth is, in the end, some things like tornadoes, like viruses, and even many human beings themselves - are truly random.

Thus, knowing why doesn't even matter.

They're still going to do what they're going to do, randomly targeting and sparing, irrespective of the status of a person or property.

So the best we can do is watch for the warning signs, accept their randomness, and take the proper precautions for our own safety, to try to minimize or mitigate the damage - just stay out of their way ;)