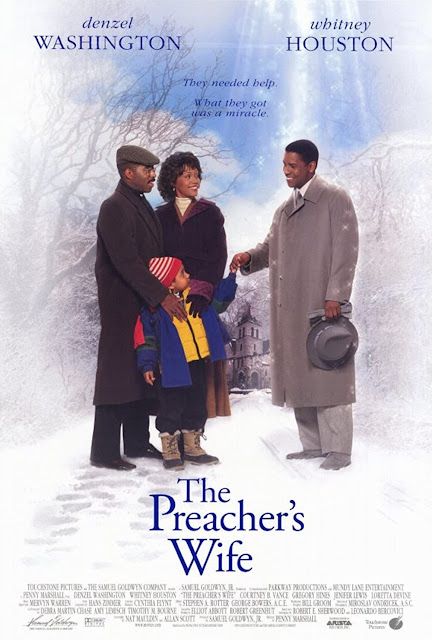 As we spend the weekend getting a tree and putting my wreaths together, we decided to watch Christmas movies to help along our Christmas Spirit.

Of course, we love White Christmas, It's a Wonderful Life, A Christmas Carol, Scrooged,  Love, Actually, and all the classics - but my favorite Christmas movie of all time is actually a 1996 remake of the 1947 Cary Grant and Loretta Young movie, "The Bishop's Wife," called "The Preacher's Wife."

Starring Denzel Washington, Whitney Houston, Courtney B. Vance, and Jenifer Lewis, directed by Penny Marshall, it's one of those extremely rare occasions where the remake is actually just as good, if not better, than the original :)

In fact, I think this story is more important than ever, this Christmas.

Unfortunately, it didn't get the full attention and accolade it deserved, likely due to an all-black cast and a female director/filmmaker, Penny Marshall contributing to lower box-office draw, back in 1996, unless Eddie Murphy was in it :( 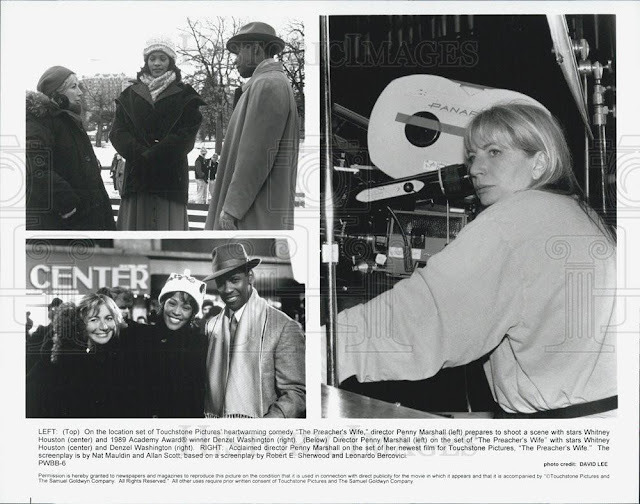 For those who haven't seen it, I'll try not to give too many spoilers, but there are a few ;)

It's narrated by the preacher's son, Jeremiah (played by the absolutely adorable Jeremiah Pierre Edmund), who is the only one who later remembers the angel and these events. 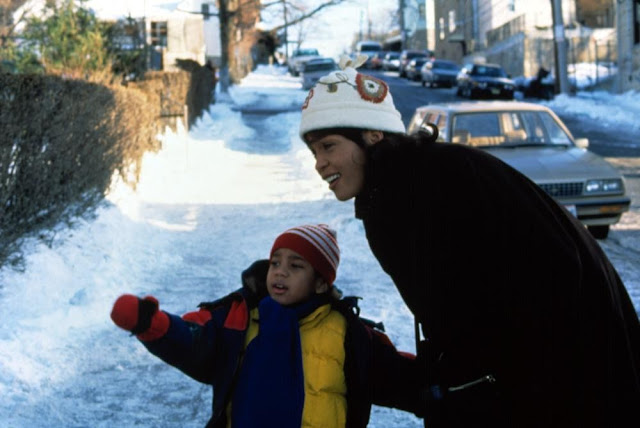 Inner-city preacher, Reverend Henry Biggs (Courtney B. Vance), overwhelmed with the amount of service and lack of money,  becomes a bit jaded and struggles in his faith and whether he's making a difference. 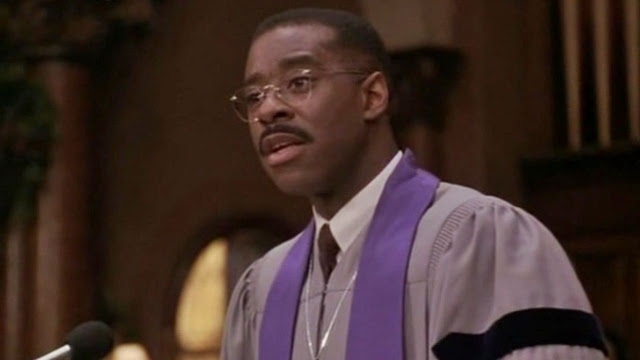 Additionally, a young man who he initially helped out of the path of crime is arrested for a story robbery, which he didn't commit and was misidentified - which can be proven by the time stamp on the ATM receipt (he was simply using an ATM across the street, but the store owner misidentified him as the thief), but the judge won't listen and judges him by his past, and Henry has become so jaded that he just shows up for the boy, but believes he's likely guilty anyway - and his son's best friend is about to be placed in foster care, as his grandmother is too old to care for him.

To make matters worse, a former member of the community, who has become a developer with political aspirations, Joe Hamilton (Gregory Hines), wants to build a new community with a brand-new church for him in the suburbs (and tear down the old church to build a city parking lot), essentially abandoning the community himself in favor of his own greed. 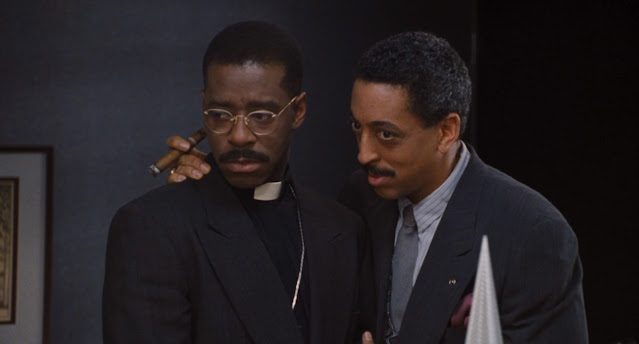 Not helping is that as a result of being overwhelmed with the amount of community service he must do with little to no money, and a broken boiler, Henry delivers lackluster sermons, which doesn't help the situation.

His dutiful wife, Julia Biggs (Whitney Houston), tries to liven things up with music as the choir director (Georgia Mass Choir), and of course, with that voice - but rarely sees her husband outside of church, and thus their relationship has become a series of duties and going through the motions. 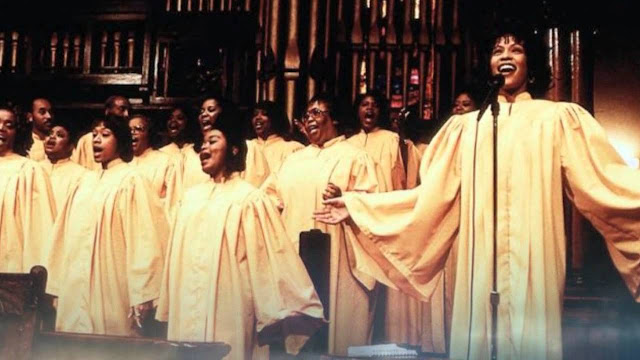 Julia's mother, Marguerite, also formerly a preacher's wife, recognizes all of these issues and does her best to help and provide Julia guidance, with a side of sassy irreverence that can only be delivered by irrepressible Jenifer Lewis (whom I pretty sure never ages lol). 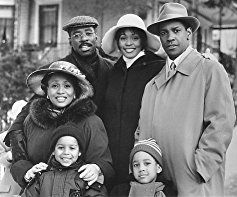 Not helping, of course, is that Henry initially makes the decision without her to sell out to Joe - but we're jumping again of the story ;)

Before he makes this decision, Henry prays for "a little help here" from above for Christmas, and God sends an angel, Dudley (Denzel Washington) to help him, only he doesn't believe he's an angel, he just thinks he's a nice-but-crazy man lol. 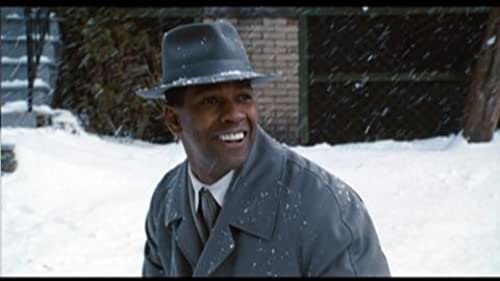 Speaking of which, ladies -  let's just pause for a moment, here, to admire Denzel Washington in a suit and fedora ... 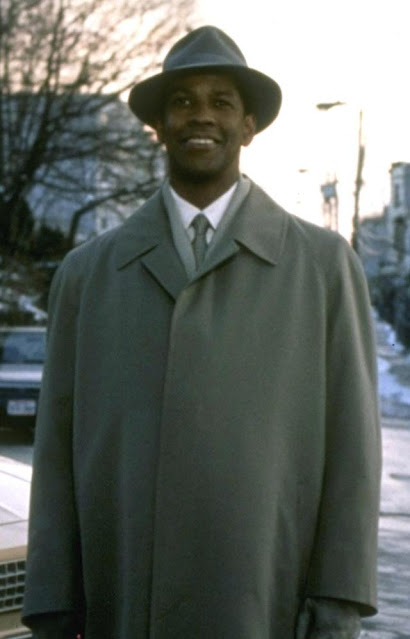 I would say that I wish men still wore hats, but the truth is, not every man can wear one well - in fact, when it comes to actors in movies - with the exception of Harrison Ford - nobody rocks a fedora like Denzel Washington ... 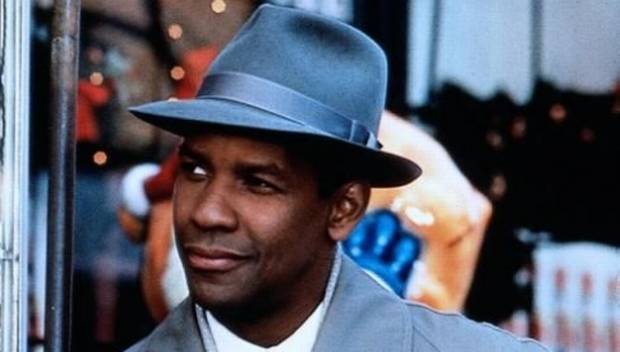 Ahem, anyway, Dudley is there to help Henry with guidance, but there are rules - he can't make Henry do anything he doesn't want to do, directly tell him what to do or make decisions for him, or do anything for Henry that Henry can't do for himself - and most importantly, no one will have any memory of the events after his job is complete, just see the results of his initial prayer (except for the children).

Denzel tries not only to help encourage him to keep going, but tries to help bring back the fire to Henry and Julia's relationship, especially after Henry makes the decision to sell out to Joe, essentially selling her father's church to be torn down.

He sets up date nights for Henry and Julia, but Henry doesn't take them, too busy with service, and asks Denzel to take her instead.

Uh-oh is right - because of course Dudley begins to feel himself falling in love with Julia (but don't worry, he does the right thing in the end and saves all :)

One of those outings recreates the famous ice-skating scene, found in the original 1947 movie :) 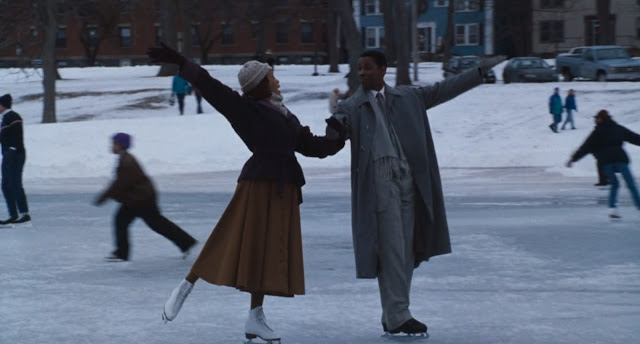 My favorite part of the movie, however, which I couldn't find anything but a poorly made clip of, is Henry's "final" sermon on Christmas, in which he is supposed to announce the closing of the church and moving to the new suburb church - but goes off script - which is a problem, at first, because Joe has arranged for the service to be televised to gain an audience for the new church and community Joe is building.

As I said, this poorly-made clip doesn't do it justice, but I've also transcribed the sermon below, because I've remembered this part of the sermon ever since I originally saw the film back in 1996, which is essentially, "We see God in the faces of the people we love." :)

"While we're here on this earth, there's some things we've just got to work for.  Am I right about this?

"But the good news is that he gave us two secret weapons to help us to succeed ...

"Sometimes, we take love for granted."

"Those who are nearest to us, dearest to us ... those are the ones we forget to cherish."

"But the miracle is, when we love someone ... we are really loving God. "

"Look in wonder at those you love ... for they are the face of God."

"And when the path is dark, and the road bends, he will give us heart, and make us whole again."

"You see, he's got these angels, waiting in a long line to come down and help each and every one of us - and they do!"

"So you see, Beloved, today, I am truly blessed."

"And blessed with the belief that I CAN make a difference."

"We can save this church!"

"We WILL help our poor!"

"We WILL help our young!"

"So now, let us begin again.  Let us go forward ... forward in hope, forward in love, and forward into the new days of our lives."

"Put your hands together and praise God!  Hallelujah!"

After which, Whitney delivers what is, IMO, one of the best performances of her career (second only to "I Will Always Love You.")

"I Love The Lord" - Whitney Houston and the Georgia Mass Choir

"And pitied every groan."

Whitney was never better than when she sang gospel, her face and soul just lit up like a Christmas tree.  Her voice just poured out of her like water, especially when she went back to her roots and sang gospel -  effortlessly floating up in praise to God, from the depths of her soul.

Unlike other Christmas movies, I still cry at this movie, when I hear  that sermon, and especially hear Whitney sing this - the tragic beauty of Whitney.

I know God loved Whitney despite it all, she was blessed with too tremendous of a gift that still blesses us to this day - the trials, temptations, and tribulations of this earth simply became too much for - but I believe God loves her still - her voice inspires and blesses us us still :)

Afterwards, she delivers this bring-you-to-your-feet rendition of "Joy To the World," along with the Georgia Mass Choir :)

Speaking of seeing God in the faces of the people we love, I concluded long ago that love HAS to be divine - there's no way we humans could've come up with it/evolved into ourselves.

All species have attachment and affection for evolutionary purposes and survival, sure - but only humans have the ability to differentiate between different types of love and experience the full depth and breadth of love.

And just like God, there's no tangible evidence that love even exists.

There's no scan we can do, no test we can take  - we only know love exists because we feel it and the only evidence we have is we can see it's results :)

Wishing God's greatest blessings to you, this Sunday, which are rarely prosperity - but instead, they are hope and love :)

BONUS:  Bronx-born Penny and Garry Marshall are brother and sister, and were both actors, writers, and directors.

Penny -  The Preacher's Wife, Awakenings, A League of Their Own, and Big (with Tom Hanks). 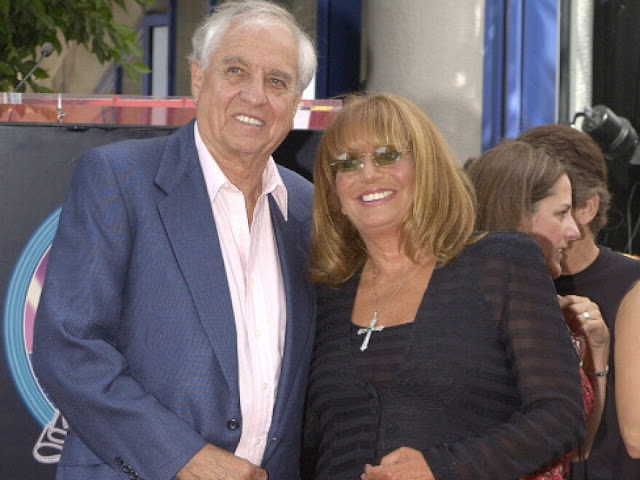 Here they are together in a cameo scene in her brother's movie, Hocus Pocus - which is actually my favorite scene, from my favorite Halloween movie ...

Every year, Mark and I say the lines along with Penny and Garry, who play a cameo role in Garry's film, playing a married couple who let in the Sanderson sisters, who as revived 17th century witches, don't understand modern-day Halloween and erroneously believe that Garry, in a Satan costume, is the real Satan and thus their master, and that he has married Medusa, due to the bendies in Penny's hair, which look like snakes (bendies were a thing in the '90s to make curls in your hair LOL.)

Penny:  "Aren't you broads a little old to be trick-or-treating?"

Bette Midler:  "We'll be younger in the morning."

After Penny catches Sarah J. Parker and Garry dancing together ...

Sarah Jessica Parker:  "Ooh, thou should not speak to master in such a manner."

Garry:  "They call me master."