UPDATE: The Vehicle Belonging to The Shooter's Fugitive Parents Was Spotted in Detroit; Detroit PD Apprehended And Arrested Them ...

... early this morning, after an intense manhunt for them began yesterday afternoon, after their lawyer first said they hadn't fled and were just in hiding for their own safety, then was unable to reach them themselves.

The U.S. Marshals were then called in, and there was a bounty put in place. 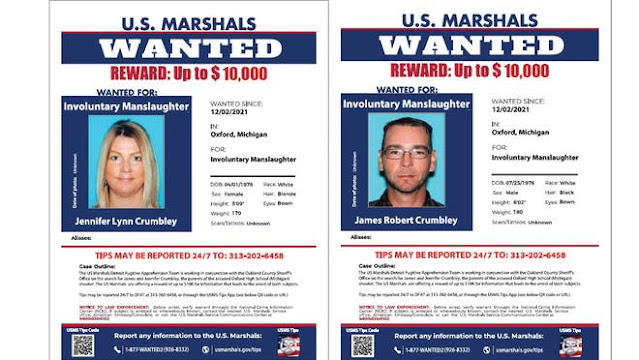 Apparently, they were apprehended and arrested by Detroit PD, two hours after a Detroit citizen spotted their vehicle parked in the parking lot of the commercial building he owned, and they're being transferred to the Oakland County Jail.

So ... this was pretty stupid move by the Crumbleys, both because  almost half of the actual City of Detroit has been abandoned and because Detroit PD is especially practiced and skilled at finding people who try to disappear within their city, often with cooperation from the remaining citizens of Detroit themselves - more than most cities.

PS - So much for Jennifer Crumbley's text to her son about him having to learn how to not get caught lol!