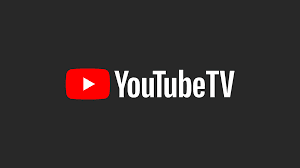 So for those of us that have cut the cord and use streaming services for TV, like YouTube TV, you've no doubt noticed more commercials, or the same commercial repeated 30 times, and sometimes no commercial at all, just a screen that says "Commercial Break - We'll Be Right Back" with a little song that's so annoying, it actually makes techno sound good.

If you're lucky, you might get a "We'll be right back, Enjoy the Zen"  with a nice nature scene, which is peaceful, but clearly  also because they couldn't find a buyer for that time slot lol. 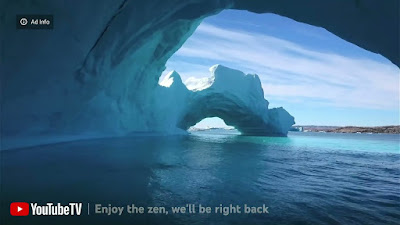 Anyway, all of that is ... fine, I guess ... but the most annoying thing is that TV shows have a planned spot for commercial breaks, but because streaming TV has so many commercials, they sometimes pop up seamlessly, right in the middle of a scene or character's sentence.

Some commercials come in so subtly that you often think they're part of the show, until you go, "Wait, who are these people and what do they have to do with the show?" - and then  you realize it's an ad lol.

And the worst part is, when you return to the show, several minutes have passed, so you have no idea what was said or done in the meantime lol.

Thus, we've gone to including these commercial interruptions as the missing part of the story, for our own amusement lol

For instance, tonight we were watching the X-Files on Comet TV, because my earlier post reminded me that Comet TV had added the X-Files to their lineup a few weeks ago, now on at 10 p.m. 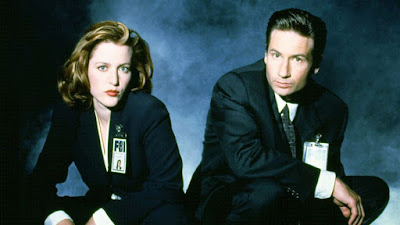 So we're watching the "Unruhe" episode, in which a woman is photographed for a passport, then runs to the car to get her forgotten money, but is stabbed - and the photo turns out not with her smiling pose for her passport photo that was taken, but with her face in terror, with some weird mist around her.

Then, a local cop comes through the door and says to Mulder and Scully, "I'm sorry to drag you all the way here from Washington, but it's unnecessary now, because ..."

... when THIS pops up seamlessly on the screen, interrupting him ... 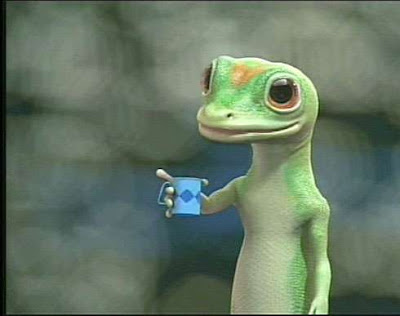 By the time the show returned, we have no idea what the cop said (but of course Mulder and Scully weren't about to leave anyway.).

So we finished the sentence for the cop, and added the Geico Gecko to the missing piece of the story, which now went like this:

Local Cop:  " ... because we have an eyewitness.  I'm sure you're familiar with the little green talking gecko from the Geico commercials? He was trying to sell the victim car insurance just before this photo was taken.  He told us that her attacker was actually Flo, from Progressive Insurance, and I'm inclined to listen.  I never trusted that Flo, she's evil!"

"Sure, she appears all friendly and perky and funny, and sometimes has good deals, but  have you seen her latest commercial? She's all like, 'if you build your own insurance, they will come,' in a corn field.  Creepy.  Witchy stuff, right?  You just know she and her Progressive pals in her coven are gonna stick it to you later.  Plus she doesn't save me 15% in 15 minutes on car insurance like Geico, it takes at least an hour. It was Flo, in the library, with a lead pipe, I'm sure of it"

"So you see, it's all completely normal, nothing to worry about, not an X-files situation at all, we've got it all under control. So you may get back to DC and continue to hunt for more pressing strangeness, nothing to see here."

Mulder:  "Well,  yes, it seems run of the mill and a cut-and-dry case for local police, but what explains the creepy photo?  Not Flo in the cornfield, but the stabbed girl's passport photo that keep changing?

"The only possible explanation for that is ... Flo from Progressive is actually an alien, using alien technology, from the corn field!!!"

Scully: (Eye roll. Sigh) "Okay, Mulder.  Yeah, so  ... I'm gonna need you to dial back on the crazy for just a second.  Can we put irrational, conclusion-jumping Mulder back in the box?  Because I really need to talk to Oxford-Educated Mulder right now, thanks."

"For starters, just because the talking gecko blamed his competitor for the murder doesn't mean it's true.  Secondly, Flo is recreating the famous "Field of Dreams" scene for laughs, which neither of you have obviously seen, or you would know that, and they keep her on those commercials because she's very likeable, not because she's some sort of powerful evil witch."

"Thirdly, we don't know what caused the creepy photo yet, but I'm quite sure we'll have a logical explanation by the end of this show.  Or not. We may leave it unexplained for effect."

"Now, having said that, I'll admit that there's some strange phenomena that we've witnessed during our time together, that I can't explain, and I am a spiritual person and Catholic - but if we don't stop  jumping to conclusions instead of ruling out logical explanations first, as well as assuming that everything that happens is 'the government' or 'aliens'  - them I'm going to stab MYSELF with an 'ectoplasmic' knife!!!"

"Somehow, this show has all become about aliens and 'the government,' for the last three seasons, even though originally, the plot of this show was different every episode and about investigating ALL strange phenomena, not just alien/government coverup crap."

"Also, people accuse us FBI agents of some crazy conspiracy cover-up shit, too, and unless we really do have entire separate personalities, or we really are being mind-controlled with "handlers" - which I'm 100% certain we are not - then I'm pretty sure most of those people are just bat-shit crazy and paranoid, rather than right or demon-possessed or aliens."

"Humans are the scariest things around, Mulder, and sometimes humans are just crazy.  You're about halfway there yourself, and if you weren't also so damn nerd-sexy, sometimes lucky and/or right, and hadn't saved my ass a few times (and vice versa), I'd have written on my report about you that you were, in fact, a total whack job, and left the X-Files a long time ago."