As I said in the last post, that day, a broad-winged hawk (which I've been told is my totem) sat right on my balcony rail, despite Mark and I going out there, which is extremely rare for a broad-wing hawk to ever come that close to humans.

This time, he didn't come as close; instead, he sat on the lowest branch of my birch tree, just in front of my balcony, just looking at me again lol.  In fact, he didn't fly away until we turned to go in and get the camera.

The first odd thing is the timing  - because I just now had time to come back and fully reread and edit the post below for typos.  Just like before, the moment I finished, I went out to water my flowers  -  and there he was again.

The second odd thing is that there was a small squirrel about two branches below him, waiting for me to put his nut breakfast out - but the hawk didn't even care - he completely ignored the skinny squirrel (that we've named "Skinny") just two branches away, which would've been easy prey.

Instead, he just sat there looking at me again, calm and pretty as you please :)

I stood still and said good morning to him -  but the moment I slowly turned to go get my camera, he flew away again.

Okay, so again, finding the most logical explanations first ...

My logical side notes that it is about the same time of the morning I saw him two days ago, so perhaps he has just set up residence nearby and this is simply the time of his morning hunt; thus, the timing only appears to be a second coincidence.

My intuitive/spiritual side recognizes that while all of that is likely true, it's also true that he didn't yesterday at this same time, then asks why this close to me again, despite all the trees and balconies in this community, completely ignoring the easy prey of a small squirrel just branches away, and especially right after I'd either finished that post or finished editing it, two days later?

But in fact, in this case, my logic and intuition/faith are not at odds, are they?

In this case, my logic and faith aren't mutually exclusive - both premises can be true.

It can be true that he's set up residence nearby/this is his morning hunt time AND his coming so close to me is more than coincidence.

And I'm too big for a meal and he shows no signs of aggression, particularly ignoring the squirrel two branches away :)

Now, it could be simply hawk curiosity - but I'm not the only person out there in the morning, it's usually pretty hustle-and-bustle time.
Miss C is usually out on her patio doing the same, at the same time, watering flowers, and she also has bird and squirrel feeders, plus a tulip tree in front of her patio, and a super tall magnolia tree to the right of her, between buildings.  Also, people are sitting out on their balcony with their morning coffee, taking morning walks,  or leaving for work.   And today, there's a a couple of moving guys moving furniture in, in the building next door.
I'm pretty sure I'm not that interesting in comparison, so why my balcony and tree?  lol.

Now - if proven fact and your belief (which is often fear-based) are at odds with each other - time to either throw out your belief as false or readjust your hypothesis - but in this case, they are not.

And in fact, the basis of forming scientific theory actually begins with belief - hypothetical hunch, later proven as fact, disproven, or inconclusive, after testing with scientific method.

HOWEVER - that does NOT mean we should ever fully trust our speculative-belief hypothesis without testing by following scientific method to prove it, no matter how logical/scientific we can dress up our reasoning with words to make it sound - testing and proof are still always required to pronounce something as fact rather than belief!

Because remember, if scientists disprove themselves by scientific method, they either have to throw out the experiment entirely, or adjust their hypothesis and retest, now including variables they did not consider before.

If it can't yet be proven or disproven via scientific method yet, because we aren't equipped, or because the results are inconclusive?

Well, then we have to allow for all possibilities until that testing is available - and not just the one we really, really want to be true ;)

We of course have the right believe what we want - but we really shouldn't state it as fact or condemn others for not believing like we do, if we can't prove it - especially if we ignore all other evidence to the contrary and/or variables that could've affected our hypothesis belief ;)

Like the Wuhan lab-leak theory.  As I blogged last year, though it's unlikely, because Wuhan is like the CDC of China - which means  they mostly test and aggregate studies performed by  academic institutions, rather than "create" or perform studies themselves - it's not impossible, either, especially in China.

However, until I see absolute proof one way or the other, I "believe" nothing - I leave open the possibility until we have proof either way.

But one thing I do know is that violence against Asians has increased 150% since COVID - and nobody should be beating up people just because they're Chinese or Asian - how will that help?

Back to science versus faith, it should actually be science AND faith - because though political people try to push you to choose between them, there are certain situations where you don't have to choose, both can actually be true - science and belief are not necessarily mutually exclusive - sometimes it's just a matter of perspective - because perhaps belief/faith is just science that has not been tested or explained yet :)


Back to our hawk - in this case, my logic and faith aren't at odds,  both can be true - so I thus repeat the gratitude prayer in the PS in the post below x2, leaving open the possibility  ;)

PS - And no worries, no squirrels or other birds were harmed in this story lol - because as I said, the hawk apparently had no interest in him in the same tree - and the little squirrel came down for his morning breakfast of mixed nuts just moments later :)

As I said, I don't have a  picture of the hawk, because he flew away again, just when I turned to go get the camera, but here's the little squirrel that I mentioned was in the same tree as the hawk, just branches away, but the hawk ignored him.

He climbed down moments later for the nuts I set out for them :) 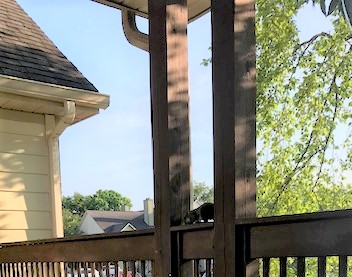 And just for reference, this is how close the birch tree is to my balcony.  The balcony railing itself in the photo, below the hanging flowers, was exactly where he was sitting the other day. 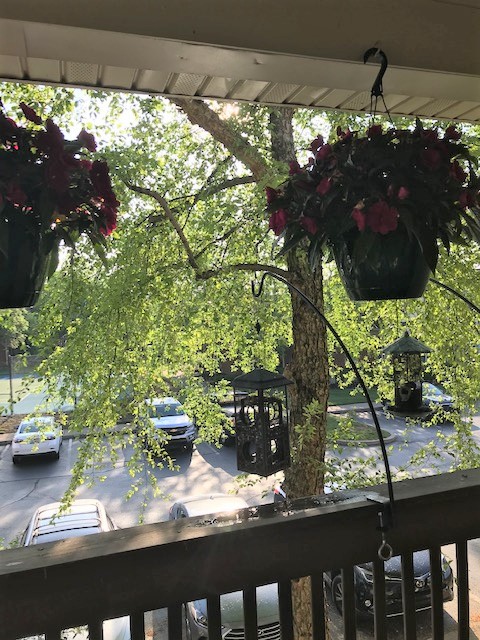 The hawk was sitting in that first lower branch :)

I love this birch tree, it's my favorite thing about living here, a constant source of nature entertainment.  There are others in the community, but none so close as this one.  The branches used to be a lot fuller, until community management cut off most the lower branches off last summer :(